So there’s apparently some Midwestern fast food chain called Dog ‘n Suds that once upon a time came southeastern, to the Loveliest Village on the Plains. And the young people there welcomed the yankees with open mouths. And sticky fingers.

“The girls are having a hard time serving Root Beer in their hands,” read the half-page Dog ‘n Suds ad thanking Auburn students for the “wonderful welcome” that ran in the June 29, 1960 issue of The Auburn Plainsman. “So, for every mug that is returned you will receive one FREE Root Beer.” 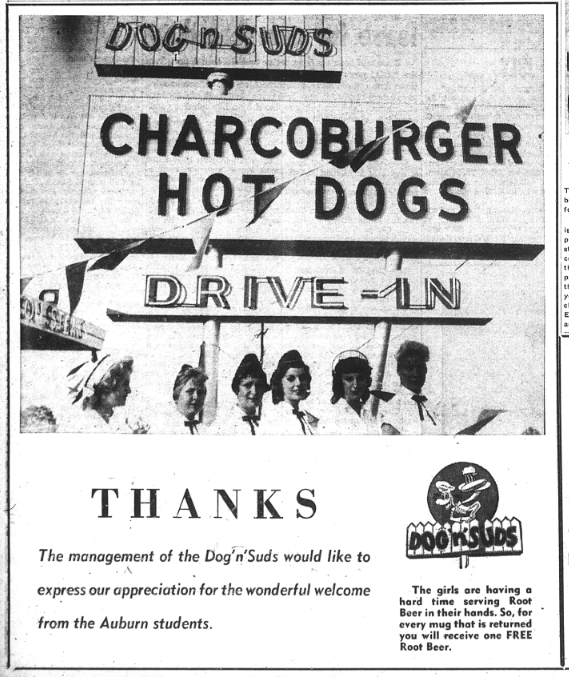 Looks like Auburn students may have drunk the place out of business—and out of the South, at least mostly. The southernmost of the 17 remaining Dog ‘n Suds locations is in Paragould, Ark.

* 78 never-before-seen photos of the Kopper Kettle explosion of 1978
* Loveliest Fast Food Joints of The Plain: Bill Holbrook vs. McAuburn (1978)
* That time Green Day played an Auburn house show
* The G.I. Joe from Auburn
* Two campy degrees of separation between Auburn and Swamp Thing
* I Survived the Kopper Kettle Explosion and all I got was this T-shirt