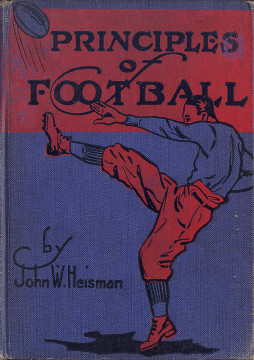 We consulted former Auburn coach John Heisman at the beginning of the 2013 football season—turns out Auburn was the first team to run a hurry-up offense—when Saban and Bielema were just bellyaching to the press. Now that they’re actually trying to eradicate the hurry-up offense (that for some reason they can’t seem to simply adapt to) by sneaking off to make bogus complaints about “player safety” to the NCAA rules committee, we’re turning to ol’ Heis again, specifically his Principles of Football, which was penned in 1922.

Here are few axioms that pepper the book on normal American football. Just for quick kicks.

You can’t do yourself justice without getting and staying in condition.

Don’t be late in lining up.

Don’t let your opponent get the charge on you.