The final play of the Iron Bowl is going to inspire young artists for years: writers, film makers, painters, French surrealists, all sorts.

Birmingham first-grader Winston Martin expressed his bulletin board-worthy feelings for the game in (Rod Bramblett’s) words. A six-year-old named Davis from Madison, Ala., on the other hand, went pure illustration… or I guess sort of mixed media or whatever; he included the score and that most famous of Auburn expressions: WOR EGL.

“While we were watching the Tennessee game, my six year old son, Davis, decided his favorite Auburn player was Chris Davis, partly because of the name written on his jersey, but mostly because of his 85 yard punt return for a touchdown,” says proud papa Dan. “Ever since then, he always wanted to know when his namesake was out on the field.”

“After the Iron Bowl, he drew this picture to remember when his favorite player made one of the most amazing plays in Auburn football history. It captures the moment right at Bramblett’s ‘It’s got, no, it does not have the leg’ call. Even today, we’ll be sitting at breakfast, and he’ll say, ‘I still can’t believe we won that game. That was awesome, wasn’t it, Dad?’ 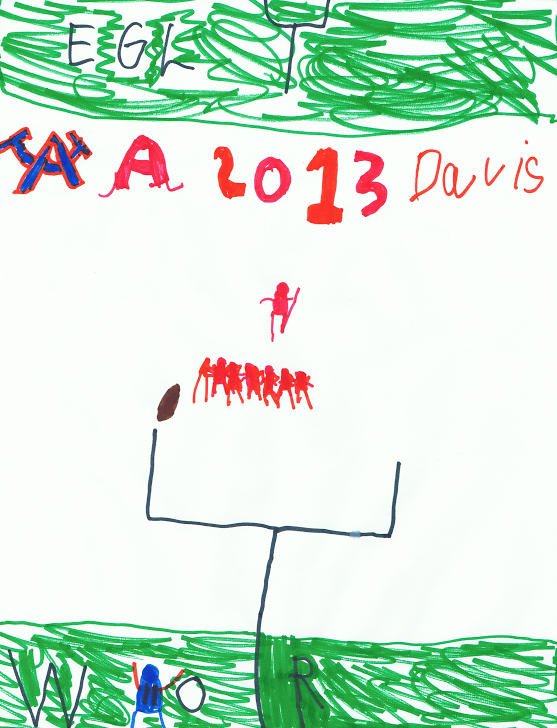 Has your kid written or drawn or painted or sung or filmed something inspired by the greatest football game ever? Let us know!

Related: Girl making a movie with her Littlest Pet Shop toys captures her dad’s reaction to the final play of the Iron Bowl.