There was a scheduling mix up at Dee Ford’s office today, which meant that instead of having to be out showing property like all the other boring surveyors from Kent, Dee got to sit there in the middle of her coworkers and watch the uniquely American spectacle that is national signing day unfold (on mute) via the streaming video on AuburnTigers.com. And we’re all the better for it.

The nicknames were probably the best.

Auburn Sports Information Director Kirk Sampson was “Mr. White Shirt.” She gauged whether a big announcement was coming by whether “Mr. Blue Jumper” was doing stuff on his cell phone. And “Mr. Orange Jumper,” aka Dameyune Craig, even started following her on Twitter, much to her delight.

“oooh @CoachDCraig is following me,” Ford tweeted, early in the afternoon. “I don’t know you (yet) but you I think have an amazing team and the BEST fans. :)”

Craig wasn’t the only AU VIP following Ford’s national signing day timeline. Auburn Athletic Director Jay Jacobs messaged Ford to let her know he was enjoying her commentary, and that the Auburn gear he promised to send her was mailed on Monday. 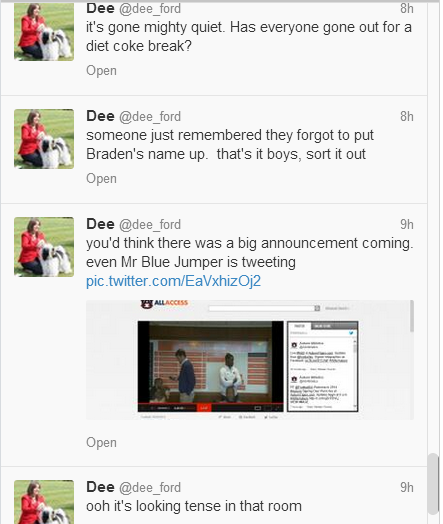 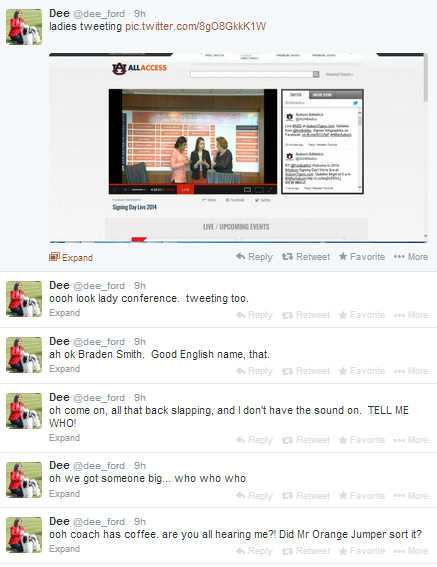 … who happened to call “the most unlikely of fans” while I was interviewing her via Skype. She ended her conversation with WSFA’s Sally Pitts with a “War Eagle” that didn’t make it to air.

Despite all of the LOLs, Ford, who in addition to watching the Super Bowl has been studying Auburn game film on YouTube, says she now considers herself a genuine football fan. She even tried her hand at recruiting analysis Wednesday.

“I wanted to have a chat about Chris Laye,” Ford said. “I read his profile on Auburn Rivals. It’s not that complimentary. I want to make it a mission of mine to make Chris more popular.”

“Thank you all!” Laye replied to Ford and two other Auburn fans in a tweet. “I promise to do big things at Auburn and continue the tight end tradition.”

The tight end tradition was one of the topics she discussed with Pitts.

“The Auburn fans have been helping me all the time and don’t mind if I ask a really stupid question. Somebody had to explain to me what a tight end was,” Ford said during the interview for the three-minute segment that aired late Wednesday afternoon as part of WSFA’s signing day coverage.

“What did you think it meant,” Pitts asked, laughing.