You know how Google can read your mind in the search field thing? It’s fun, it’s revealing. So someone at CollegeSpun.com decided to have some fun revealing some of the more fun and revealing autofill or autocomplete or whatever search queries related to college football teams across the country in a handy infographic.

Some of the results are obviously affected by current events, like Auburn is GOING TO WIN. As in, going to win the football game, as in the 2013 Iron Bowl, as in the greatest football game of all time. Some, however, simply echo eternal truths, like Bama fans are SORE LOSERS, truths that have been amplified by current events (see: Auburn is GOING TO WIN.) 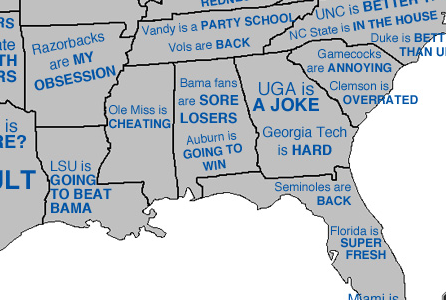 To see the entire map of the country, go here.