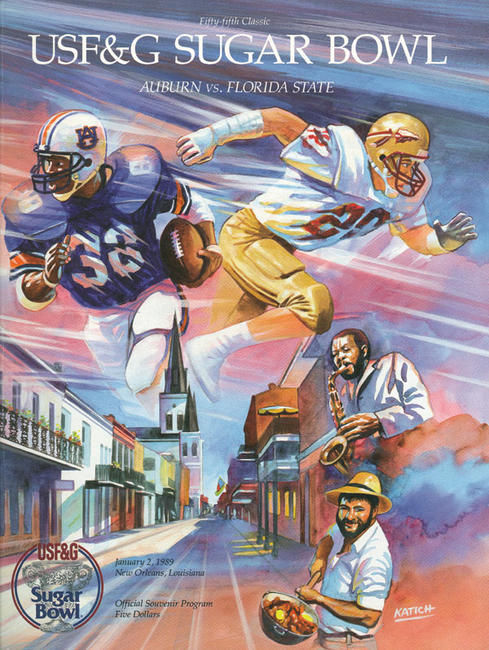 The Christmas decorations have been put away.   The New Year’s festivities have been enjoyed.   A multitude of bowl games have been watched.   And now it is time to get back down to business.  The business of renewing our recently-dormant rivalry with Florida State.

For those who weren’t around when playing FSU was a regular and fun occurrence, here are a few things you need to know about what made it a great rivalry:

–       Tallahassee is 191 miles from Auburn.  That is closer than every SEC team other than Bama and Georgia.

–       In 1987 they administered one of the worst beatings any Auburn team suffered under Pat Dye’s tenure, blowing the Tigers out 38-6 in Jordan-Hare.

–       It is fun to dislike FSU.   Lee Corso went there.  Deion Sanders once taunted the entire Auburn team in the Sugar bowl.   Their fans still don’t really know how to behave when their team is having a winning season. And their war chant is incredibly annoying over a four-hour period. (We think of it as “Rocky Top” for people who don’t like to bother with memorizing lyrics.)

–       For a few years in the 1990s we were sort of obligated not to dislike them quite as much as we did during the Eighties. Then Terry Bowden quit as Auburn coach, and we were free to go back to wishing them ill again. Editor’s note: Especially because of stuff like this.

It is interesting to read and listen to people discussing the 2013 Auburn Tigers and refer to early-season games.  Other than counting as wins on the overall record, the games played before Auburn faced Ole Miss are not very relevant to what happens in Pasadena.  During the bye week after LSU, the offense transformed into a read-option machine.   At mid-season Auburn had improved from the 7-5 level team that started the season and looked like a team that could go 9-3 or 8-4.   After the win over Texas A&M and the two SEC road wins in Fayetteville and Knoxville it was clear the team had improved to an entirely different level.   Auburn played its best football of the season against Georgia (for the first three quarters, at least).  Then it improved again and played its best game against Alabama.  Then it improved even more and demolished a top 10 Missouri team.  Comparing the Auburn team of today to the one of early September is like comparing a Tyrannosaurus Rex to the egg it hatched from.

If Auburn plays the way it played against Alabama and Missouri it can play with any college football team in America, including FSU.

2)    FSU – they blew out ‘everyone they played’ but how good were those teams?

According to Brian Fremau’s strength of schedule rankings, Auburn played the 9th toughest schedule in the nation and FSU played the 68th toughest schedule.   Does this matter?  Isn’t it possible that FSU could be the best college football team in the country despite playing a weak schedule? Aren’t the results that FSU achieved on the field what we would expect from a great college football team playing that schedule?

Yes, it is possible that FSU is simply the best team in the nation and that they did not get to show it due to the poor quality of play by the opponents on their schedule.  (We are looking at you, Muschamp.)  And yes, if a team like the 2013 edition of Bama played that schedule we would expect results similar to what FSU posted.  But part of becoming the best possible team you can be involves pushing yourself against tough competition and getting better in order to beat them.  While Auburn was playing six of the top 30 teams in the Sagarin Rankings in close, hard fought games, FSU was blowing out lesser opponents.  Auburn was learning how to handle pressure situations late in games.

In the fourth quarters of its games against top opponents, Auburn’s heroics are known far and wide. Johnny Sack. The Prayer in Jordan-Hare. The Kick Six. The Missouri Boat Ride. Meanwhile, the FSU starters have been busy in the 4th quarter of their games, too: 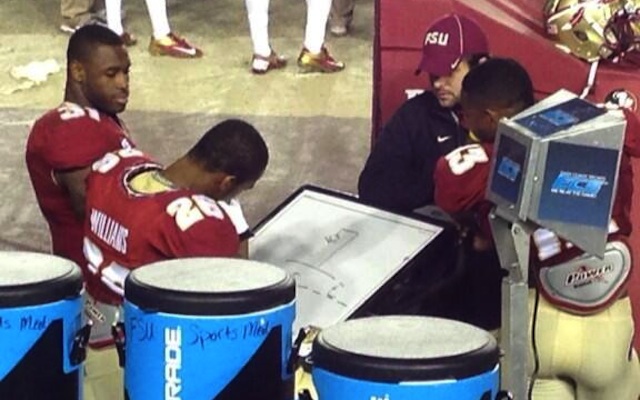 Let’s be honest. The FSU receivers scare us.   After watching SEC teams put up big passing yards against Auburn this year and then seeing Missouri’s excellent receivers carve up Auburn in the SEC Championship Game, the FSU receivers look scary.   They are talented, productive and have different skill sets.

The scariest is Kelvin Benjamin, if only because he has Julio Jones size and power. (957 yards, 19 yards per catch, 14 TDs and making defenders look bad.)  Rashad Greene is the “Darvin Adams” of the group – leading the team in receptions and yards and being Jameis Winston’s security blanket.   (67 receptions 981 yards,  14.6 yards per catch, 9 TDs). Kenny Shaw is the ‘third receiver’ but is productive also.  They like to get Shaw the ball in space and let him run.  Auburn has also struggled against good tight ends this season and FSU has an excellent one in Nick O’Leary.  (557 yards and 5 TDs.  And a 16.9 yards per catch avg for a TE is not bad.).   With all the focus on stopping the run and covering the other receivers deep O’Leary makes a lot of big plays for FSU.

So given FSU’s talent and productivity at this position and Auburn’s poor pass defense the last three games, this is a real concern.  Against UGA, Alabama and Mizzou Auburn gave up an average of 331 yards and a passer rating of 156 (which would have been in the bottom ranks in the country if carried over for a whole season.)  Yes, that was against three excellent quarterbacks but Winston is as good as Murray, McCarron and Franklin and he will put up big numbers on Auburn’s defense.

Since we don’t expect Auburn to improve dramatically in coverage overnight the only solution to this problem is for Auburn to get pressure on Winston without blitzing.   The Auburn defensive line MUST win their one-on-one battles and get into the backfield. Even if they don’t sack him, if they force him to move around and disrupt the timing of the offense this can be just as effective.  That being said, FSU has given up more sacks of Winston than you might have guessed.

FSU should be afraid of the Auburn running game. And of Gus Malzahn. The FSU players have been claiming in the past week that they have already figured out Gus’s “tendencies” on offense. Gus surely thinks that’s pretty funny. It means he has them right where he wants them. Gus’s only true tendency is to befuddle opposing offenses who think they have figured out his tendencies.

Will the Tigers be able to roll up and down the field on offense the way they did against Missouri? Probably not, given the month-long layoff and possible subsequent “rust” and chances for FSU’s defensive staff to take their time working out and installing game plans. But will the Seminoles shut down Tre Mason and company entirely? That is highly, highly doubtful.

Chris “Kick Six” Davis was injured on the opening kickoff the last time Auburn played for the national championship and missed the rest of the game with Oregon. He’s back now as a senior and should be a key factor in the outcome of the game, not only in seeking to limit the impressive FSU receivers but also in generating positive field position as a kick returner.

FSU’s freshman kicker won the Lou Groza Award and has been a solid and reliable kicker all season, but how many pressure kicks has he had to make? We can’t think of any. The Seminoles have won every by an average margin of fourteen points. Cody Parkey has meanwhile been clutch all season, and punter Steve “Steamin’” Clark has played absolutely lights-out when he was needed the most. It’s hard to imagine Auburn can claim a big special teams advantage over a team that includes the supposed “best college kicker in America,” but it is true.

Gus Malzahn is a genius, and the rest of the country is just now figuring that fact out. Jimbo Fisher, despite his time as QB coach at Auburn under Terry Bowden, is a Saban disciple. We already know how the Gus/Saban contests tend to come out, when Auburn brings anywhere near a solid team to the contest.

How about this coaching matchup?   First year FSU defensive coordinator Jeremy Pruitt (not just his first year at FSU, but his first year of being a coordinator in college football) against Gus Malzahn and Rhett Lashlee.    Pruitt is the former secondary coach at Alabama.    Nick Saban and defensive coordinator Kirby Smart spent a year preparing for Auburn and this offense and still gave up the most rushing yards bama has allowed in years.  Do you really think Pruitt can do better than Saban / Smart when Gus and Rhett start making adjustments during the game?  We don’t. 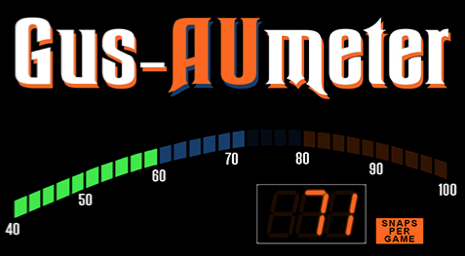 Auburn’s average number of plays per game is 71 this year – up from 58 last year.   But against the top level of SEC competition (LSU, Texas A&M, UGA, bama and Missouri) Auburn increased the tempo and the average number of plays per game was 81.4.   Against these teams Malzahn increased the pace of the offense and took advantage of the other team at times during the game.  We expect Auburn to use tempo as a weapon against FSU at times during this game.

Missouri  (At least they proved they belong in the conference now.)

Texas A&M  (Congrats on that season-defining victory over Duke!)

UGA  (You made Nebraska’s year.)

Vanderbilt  (By the team you read this James Franklin may be coaching Texas, Penn State and an NFL team all at the same time.)

MSU (With Dak Prescott coming back next year this will be a very dangerous offense.)

Tennessee (But hey, things are looking up…)

Arkansas (How about that bowl game?)

Florida  (Florida fans have two things to cheer about this bowl season – Duke OC Kurt Roper and the hope that Auburn beats FSU.)