“Daniel Moore has captured some of the greatest moments in Alabama football history on canvas. But for the second straight year, he’ll be painting a picture of a Crimson Tide loss, and this time the artwork will go to Auburn.”

That’s the lead to an al.com story on famed Bama artist Daniel Moore who, as the artist annually commissioned by the U.S. Sports Academy “to create a painting of the College Football Game of the Year,” is having to ply his trade on the college football game of the millennium, and ergo, the most crushing Bama loss in all possible worlds. It may be the best lead ever. It’s poetry.

It’s currently just in its embryonic, pencil sketch form, but here’s what the painting, which Moore is calling “The Runback,” will look like: 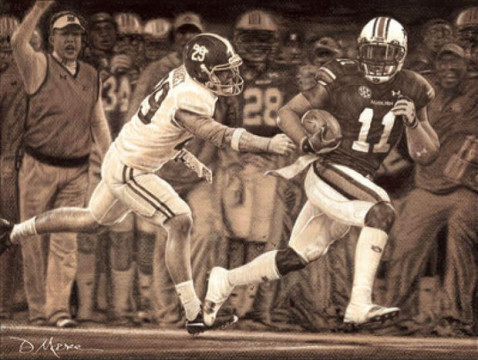 You can read the rest of the story here.

Speaking of Iron Bowl-inspired art, you still have a few hours to bid on these pieces…