I’d always heard that growing up. You’d hear it and laugh and think “yeah, ha, maybe… ” and then wonder how you’d ever be able to watch “Rocky 4” or play that USA vs. USSR hockey game in the arcade again if something like that ever actually happened, and you did find yourself pulling for the Reds over the Crimsons. And you thank God that it never happened.

Except the time it did.

When I interviewed Sanders several years back, he told me about it.

“I always thought that was just a joke,” I said.

“In 1970-something they opened that coliseum downtown (in Birmingham) and there was a basketball doubleheader: Auburn vs. Czechoslovakia and Alabama vs. Russia,” Sanders said. “This is the height of the Cold War, and I said, ‘well, tonight I can pull for Alabama, they’re playing the Russians.’ And a rebound comes off—they’ve got a 7″2 guy (Vladimir Tkachenko), the Russians do. He reaches up and is just going to casually take the rebound. Well, Reginald King, one of the best Alabama players ever in my mind, takes that ball away from him and stuffs it in. And I’m sitting there at the table and I said “G*d****t, Tkachenko—hold on to the rebound!” And I said, ‘oh my God, I’m pulling for the Russians!’” 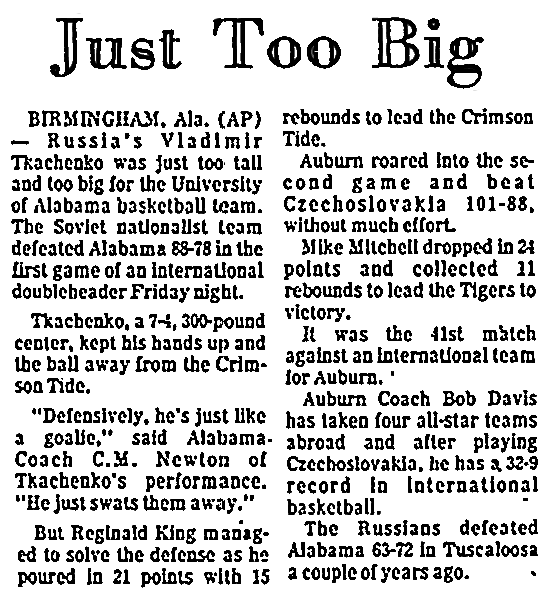