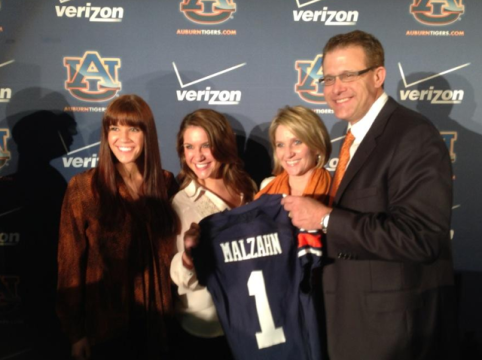 If you have a second, here’s the press release from Auburn about Gus Malzahn winning the Paul “Bear” Bryant Award:

The award was Malzahn’s fifth national coach of the year award. He also won the 2013 FWAA/Eddie Robinson, Liberty Mutual, Home Depot and Sporting News Coach of the Year awards. Malzahn led Auburn to a 12-2 record in 2013 en route to a Southeastern Conference title and a berth in the BCS National Championship game.

In its 28th year, the Bryant Award is selected each year by the National Sportscasters and Sportswriters Association. The award recognizes excellence in coaching both on and off the field while raising funds to fight heart disease and stroke for the American Heart Association.

Other finalists in attendance for the 2013 Bryant Coach of the Year were David Bailiff (Rice), Art Briles (Baylor), Mark Dantonio (Michigan State), and David Shaw (Stanford).

R.C. Slocum, one of the longest-serving and winningest football coaches in Texas A&M history, was also recognized with the 2014 Lifetime Achievement Award at the event.