History and Auburn’s Dominance of Alabama

One year ago there was a perception that a tidal wave had washed across the state of Alabama and across the SEC and that Auburn football was destroyed, irrelevant, washed away, never to return.  That history was set on a path with Auburn not being competitive with Bama.  With the hiring of Gus Malzhan that changed. Saturday evening the change went into full effect.

1)    How is Auburn doing compared to its biggest rival?  Surely with all the greatness of the Saban years Auburn must be far behind in the rivalry, right?

So Alabama has had the greatest or second greatest period of football success in its history over the pastfour years, and Auburn is still holding its own or leading in the rivalry.

2)    Alabama only beats Auburn when Auburn is bad. 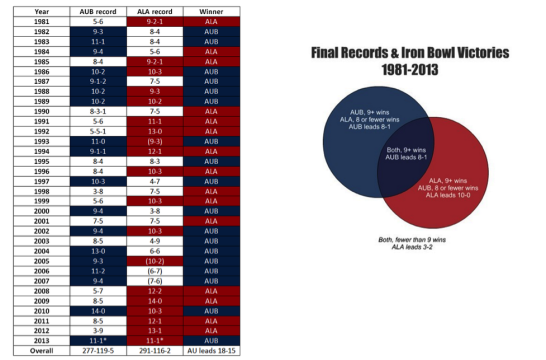 Thanks to @charlescrain and @TigerBeasley for these excellent stats and graphics!

As you can see, when the two teams are both good, Auburn leads 8-1.  If you want to look at 19 games where one team was significantly better than the other, this one stat should show you all you need to know about the Auburn – Alabama rivalry.

We saw the results of Gus Malzahn with all season to prepare and two weeks to install new things and the results were……… the same offense Auburn had been running all year, just executing at a very high level.  Unlike 2009 Auburn did not need to resort to trick plays and risky gimmicks to keep Auburn in the game.  Auburn played Bama straight up – as an equal opponent – and won.

1)    Coming into the game Bama was converting a third down into a first down 53% of the time against SEC opponents.  Against Auburn the visiting team went 4 for 13.  Auburn’s defense was good enough when it needed to be – on third down, in the red zone, on fourth down.

2)    The perception has gotten out the last few years that Nick Saban and Kirby Smart had “figured out” the Malzahn “high school” offense that it would never again work against them.  That myth has been taken out back and shot.   Again and again Bama defenders were out of position or were fooled by Auburn’s offense.  When Nick Marshall faked inside to Tre Mason the Bama linebackers bought it again and again.

3)    Auburn’s defensive line only got one sack in the game but had five tackles for a loss and ten quarterback hurries.   AJ McCarron was often forced to move in the pocket or run outside to throw.  And while he still was effective, the pressure of the defensive line made a difference in the results.

4)    The undefeated, two time defending national championship team was affected by the pressure of the game and by the amazing home crowd in Jordan-Hare.   Bama had not been in close games this year and had not played in an environment like that (admittedly – no team has faced as loud and hostile a stadium as Bama faced Saturday night). The pressure and the crowd got to them.  And it wasn’t just the kickers – the receivers dropped passes and the Bama offensive line had four false starts.

5)    These were two programs passing in the night.  Bama has been on top of the college football world the past few years, but this Bama team was the worst of the recent run (2009-2013) and next year’s team will be without some key players (McCarron, Mosley, Norwood are seniors and several juniors are projected as first round draft picks.)  Auburn returns everyone but Prosch on offense and most starters on defense with lots of young talent and two injured players who could make a difference next year (Justin Garrett and Josh Holsey).  With a coach who won’t be distracted by success (or anything), Auburn should be competitive in the upper levels of the SEC for the next few years. 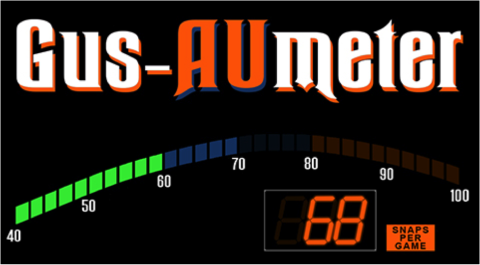 Auburn did break out the up tempo offense against Bama a few times on Saturday afternoon and it was very successful.  We expect to see MUCH more of this in the future against them.

Onward to the SEC Championship Game and Missouri!

While we have joked for the last two years that Missouri doesn’t fit into the SEC and secretly wants to be in the Big 10/11/12, they have to be thrilled to make the SEC Championship game in their second season in the league – before Texas A&M.  This Mizzou team ran over the SEC East, winning every division game by at least seventeen points (other than losing to South Carolina in which Missouri led big and blew it.)
This Missouri team will seem like a little like Ole Miss from a style perspective, but with much better players.

What does Auburn need to do to win?

1)    Return to earth after last week’s game.   This may be the hardest item on this list.  Auburn had a week off after UGA to refocus and the lack of one this week after the game of the week / year / decade / century / millennia will be a huge challenge for this team.

2)    Run the ball right at Missouri.   Missouri is very good against the run and has excellent team speed on defense. Like Alabama and LSU the ‘other Tigers’ will be able to get to the sideline on most of Auburn’s outside plays.   No one has run the ball with great success right at Missouri this year, but they didn’t play Bama or LSU and they got UGA without Todd Gurley.  So is there difference good against the run or have they not played any really good running teams yet?  We think it is more of the latter.

3)    Missouri’s defensive line is excellent and leads the SEC in tackles for a loss.  Auburn needs to prevent negative plays on first down so that they can keep running the ball.

4)    Auburn’s special teams obviously came through in a big way against Bama and against Missouri Auburn has a big advantage in this year.  Crazy as it sounds the week after THE KICK, special teams could be the key to the game for Auburn – pin Mizzou deep and get good returns when we get the ball.   This could create a huge field position advantage for Auburn in this game.

5)    Missouri’s offense is balanced and talented.  The one thing Auburn can do to slow it down is to get penetration by Auburn’s defensive line.  While quarterback James Franklin does not get rattled, the pressure can disrupt the timing of the offense and prevent Franklin from having time to take advantage of his excellent receivers.

6)    The Missouri receivers have the potential to take over the game.  They are talented, fast and very tall.  Auburn will have problems covering all of them.  Since Auburn may not able to always prevent the taller receivers from catching the ball, tackling them in open space will be a key to the game.

7)    Do you notice what we didn’t talk about in this column? Ohio State. FOCUS ON MISSOURI.

Someday in the future when you are having a bad day (it could be next week or next year or five years from now), click on this link and let it all come back to you.

On those dark days when life gets to you, enjoy the moment when Stan White starts screaming, or click on this link and enjoy Auburn fans going bananas.

Keep that play and the feelings surrounding it close to your heart and pull them out sometime when you need it.   Then you can let a little Chris Davis and Rod Bramblett and the 2013 Auburn Tigers into your heart.

Auburn  (learn it, know it, live it.)
Missouri
Alabama  (They were one second away…………from losing in overtime. )

South Carolina  (Once again we would like to thank Steve Spurrier for wiping the field with Dabo.)
LSU  (Almost choked on some Thanksgiving pork but pulled it out.)
Texas A&M  (This team got worse as the year went on.  Coaching? Talent? Too much dependence on Johnny “run around waving my arms” Manziel?)

Ole Miss  (Recruiting priority number one: a running back that weighs more than 180 pounds.)
UGA  (Oh they barely beat Georgia Tech?  No one in America was paying attention.)
Vanderbilt  (8-4 this year and 9-4 last year at Vandy?  They should go ahead and build a statue of James Franklin NOW.)

Tennessee (Thanks Kentucky!)
MSU  (With Prescott and the returning talent on defense they have some hope for 2014.)

Arkansas (Welcome to the SEC, Bret!)
Florida (they made the 2012 Auburn offense look awesome.)
Kentucky  (Please use that fake jump pass against UT again.)

Related: The Greatest Wishbone Pone Podcast In The History Of Sports.