Welcome to the SEC, Missouri!

When Missouri was invited to join the SEC as the 14th member, many people were surprised or disappointed.*  Missouri?  Didn’t they sort of secretly think themselves to be an institution of higher learning of the caliber of a Stanford or Northwestern, and didn’t they really and not so secretly want to join the snooty B1G, not the good ol’ boy SEC?

From the SEC’s perspective, if the conference was to expand, why not grab Virginia Tech or West Virginia?***  They seemed on paper to be better fits. Would Missouri fit in?**  Weren’t they more of a basketball school? Did they even field a football team? If they did, could it and would it be competitive in the SEC?  Well, the newest Tigers answered the last question this year****, and answered it in emphatic fashion, by winning the SEC East.

So the SEC learned something about Missouri this year. But Missouri in turn learned a few things about the SEC on Saturday, too, including:

–        Don’t open up your SEC Championship game ticket sales to outsiders. (Several thousand Auburn fans thank you for doing so, though.)

–        Don’t enter a land war in Asia. (We’re not entirely sure how that was demonstrated on Saturday in the Georgia Dome, but it’s good solid advice, regardless.)

–        Don’t keep dropping back to pass against this Auburn defensive line. (Well, duh.)

–        Don’t fall asleep when Auburn is kicking off to you. (Our onside kick always works. We were robbed in Baton Rouge.)

–        Tony LaRussa is going into the Hall of Fame. (Not really Auburn- or SEC-related, but definitely something they learned this week, and something they care a lot more about in Missouri.)

Greg Robinson (#73, left tackle, occasionally mistaken for earth-moving equipment) had an incredible game Saturday afternoon. While the entire Auburn offensive line played very well, Robinson had one of the best games by an Auburn offensive linemen in a long time.  The Missouri defensive ends are all future NFL players and Robinson felt each of them made a fine pony for him to saddle up and ride halfway to Gwinnett County.

Here is a short video of a Tre Mason goal line carry where Robinson blocks his guy out of the play.

We will now point out a few plays where we tell you to stop and look and enjoy the Robinson.  You may have to stop and start and watch it a few times.

– 34 seconds into the video Marshall runs left and Robinson pushes his guy downfield as if the land must be cleared immediately for a new housing development.

– 4:35 into the video Robinson blocks to the inside.

– 5:14 into the video on the goal line Robinson blows his defender so far out of position they almost end up in Tre Mason’s way. This is called a positive-inadvertent-almost-negative. Or something.

– 6:08 into the video.   Auburn goes unbalanced line – Robinson is on the far right of the line and on the left is only the guard and a tight end.  Robinson clears a whole up the middle for Mason, as if he’s heard they’re getting ready to tear down the Georgia Dome and he’s getting a head start on that.

Sometimes You Need Help………….and You Get It?

If there is a way left that Auburn hasn’t experienced, whereby we do everything required of us to play for (or win) a national championship, only to get screwed out of it at the finish line…well, we haven’t heard of it.

1983: Scenario going in: Auburn is stuck in 3rd before the bowls. We need 1 Nebraska and 2 Texas to lose, and we need to win.  What happened: Check, check, and check. Miami beats Nebraska, Georgia beats Texas, and we beat Michigan. Miraculous. We’re Number 1, right?  Results for Auburn: Ha. Of course not. Miami jumps from 5th to win the national title. Nebraska falls from 1 to 2. Auburn remains at 3.

1988: Scenario going in: Auburn needs to go undefeated to face Notre Dame in the Sugar Bowl. What happened: An earthquake on the last play in Baton Rouge. Results for Auburn: Off to the Sugar Bowl for a (relatively) meaningless contest with surging FSU, while Notre Dame draws an inferior West Virginia for their national championship coronation.

1993-94: Scenario going in: Auburn is on probation and cannot appear on TV or play in the post-season. What happened: 11-0. Only undefeated team in the country. Results for Auburn: Florida State, with a loss (and with our coach’s dad as their coach), finishes as the #1 team. Auburn isn’t in the top 3.

2004: Scenario going in: Auburn is coming off a disappointing 2003 where they had begun the year highly ranked but had looked bad most of the year.  USC and Oklahoma begin the season at 1 and 2. What happened: Auburn runs the table start to finish and wins the SEC Championship Game to reach 12-0. But USC and Oklahoma never lose. Results for Auburn: USC and Oklahoma play each other in the BCS title game and Auburn is relegated to a (relatively) meaningless Sugar Bowl against Virginia Tech.

The above is the sort of thing Auburn fans have come to expect. Oh, we still hate it, and we grumble about those events and seasons, but many of us also have come in some ways to accept that we are simply the “snakebit team;” the team to which “something always happens” negative to block us from the national title.  This is part of why the 2010 team was such a revelation and meant so much to the Auburn Family. It let nothing stand in its way. (And we all know a lot of things tried to block it and stand in its way!)

But 2010 felt in so many ways like a one-shot deal; like an aberration. Surely the stars would not line up that way again for many years to come. Certainly Auburn could have other good or great seasons, but the idea that we could somehow defy our bad karma–or, even more miraculously, actually have things en masse bounce our way all at once–seemed entirely unthinkable.

And so we arrive at 2013, when the stars miraculously–and that’s a big, key word for the 2013 season: miraculously–aligned again. The things we needed to have happen–the things that NEVER happen for Auburn when we most need them– HAPPENED.

Is it any wonder we’ve all been walking around in a daze ever since Saturday night?

[Van  – in this part I want to talk about history and how we did not get help other years.  Then I will detail how we got help this season.] 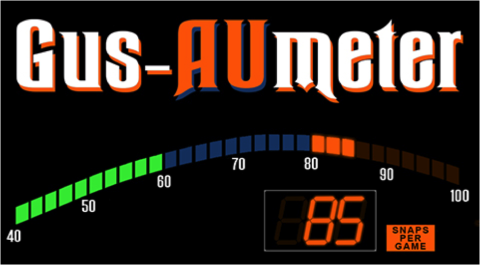 With a high scoring, back and forth game going, Gus put his foot on the gas and Auburn tied its highest number of plays in a game this year.

Why: The BCS National Championship Game

How:  Being the best two college football teams in the country.

We will have plenty more FSU discussion before the game, but here are a few things to remember:

Auburn played what turned out to be a best-of-seven series with FSU in the 1980s and in 1990. Auburn won the first three, lost the next three, and then closed out the series by winning the rubber match at Jordan-Hare in 1990, 20-17. Yes, the Fumblerooski was involved. Auburn won the 1984 game 42-41 in Tallahassee in perhaps Jim Fyffe’s greatest moment as the Voice of the Tigers (the game was not on television!).

The aforementioned 1989 Sugar Bowl. This is the entire game video – if you want to see the important part fast forward to about 2:28.19. Auburn throws a pass to the goal line where there is clear pass interference on FSU. (If by pass interference you mean driving Freddy Weygand’s face into the turf seeming hours before the ball arrives.) This is before Deion Sanders intercepts the final pass of the game and taunts the entire Auburn sideline.

Alabama  (They were one second away…………forever. We like to think of it as that one second that never ticked off the clock in Legion Field at the end of Bear Bryant’s final Iron Bowl in 1982.)

Missouri  (An excellent team – but not the SEC Champion.)

Vanderbilt  (Why would James Franklin leave?  Let’s see… How about because Vandy went 8-4 and got a terrible bowl spot?)

Arkansas (We’re sure Butt Head will get his first win in the SEC sooner or later.)

Florida  (For a quick upsurge from where their offense was during all of 2013, Scot Loeffler might be available!)

* Van was surprised by the addition of Missouri but not disappointed–quite the opposite. Missouri was selected by the SEC primarily for the opportunity to get the conference into the St Louis and Kansas City TV markets, a by-product of which would inevitably mean more Auburn appearances on television in the metro St Louis area, where Van lives. Indeed, he no longer has to subscribe to ESPN GamePlan or rig his laptop computer to the TV in order to see most Auburn games.

** No. Fans in the area are still doggedly focused on the Cardinals baseball team, and many seem uninformed or oblivious to the fact that their local university is now a competitive member of the greatest football conference in America–and very nearly won it this year.

**** Unfortunately, they also answered some of the other questions, too…