And a Florida State grad paid $5,000 to call Auburn cowards. 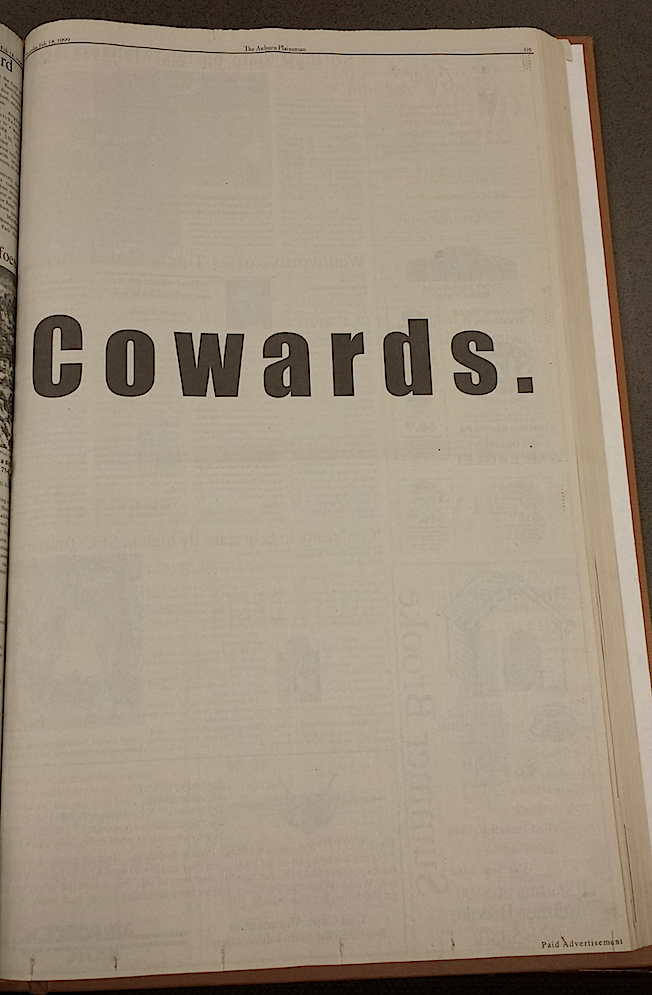 At least that’s how much Auburn grad Ryan Lee, a freshman on the Plainsman’s sports staff at the time, remembers being forked over for the full-page, one-word ad that ran in the Feb. 18, 1999 issue of the Plainsman. Whatever the amount, Lee says it “was fairly above the market rate given how controversial the ad would be.”

And it was controversial. But at first, what with zero context beyond the tiny “Paid Advertisement” in the bottom right corner, no one knew exactly why.

Seeing as how we were only a couple of months removed from the most controversial page of the Plainsman ever, most folks seemed to think it had something to do with—you’ll never guess—Bobby Lowder.

“Last week’s ad printing of only the word COWARDS was a disgrace and outrage to Auburn people everywhere,” read a letter to the editor printed in the following week’s edition. “Are Bobby Lowder’s enemies offering you money and jobs in the future in exchange of you bashing him week after week?”

The following week, Plainsman business manager Robert Edmonds, who was having his Auburn Manhood called into question, felt compelled to set the record straight.

“The ‘Cowards’ ad published in the Fe. 18 issue of The Auburn Plainsman was paid for by a Florida State University alumnus. It was not an editorial, as some have suggested,” Edmonds wrote. “According to the advertiser, it was intended to target those who chose to buy out the FSU contract and no one else. The Auburn Plainsman  was selected to deliver the message because of its circulation. It was an unsolicited paid expression concerning a football game cancellation, and that was it.”

According to Edmonds, most of the Plainsman staff didn’t want the ad to run. Lee remembers the decision being entirely Edmonds.

“At that year’s Plainsman banquet, his (Edmond’s) successor presented him with a framed copy of the ‘Cowards’ ad, and there was a laugh about how that would definitely be his legacy,” Lee says.

…
For a $10 donation to TWER (just make sure you include your address), you can turn your car into a Bramblettmobile! Or a Hot Rod, if you will… If you’ve already made a donation just for the O:MG sticker, don’t worry—you’ll get the 109 Yards sticker, too! But act fast, supplies are limited…