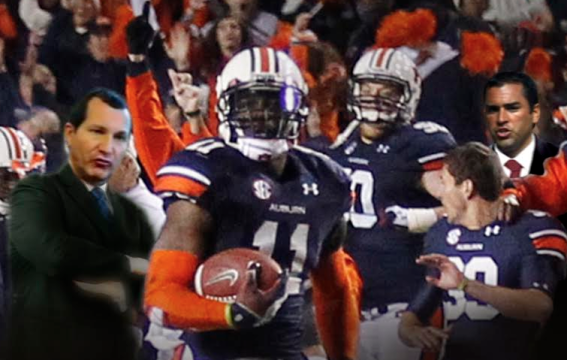 Thank goodness there was not as much bad as there was good, in my opinion.  I will present only two examples — because they are examples of not only bad journalism (in my opinion), but also bad trends.

Here is the obvious disclaimer of being an Auburn fan and faculty member.  I am at least equally as passionate about professional journalism practices.  But you can factor that into these comments and judge for yourself.

Kevin Scarbinsky’s column on Tre Mason — in which he called Mason’s confidence in Auburn’s running game “foolishness” — was a definite turkey, as well as a bad prediction on his part.

Mason responded to Scarbinsky’s click-inducing trolling with class (as Ryan Black noted in my column yesterday).  But Scarbinsky compounded the misstep by appearing to take partial credit for Mason’s performance: He tweeted, “Who lit a fire under Tre Mason?”

Even in Scarbinsky’s follow-up column, he shrugged his shoulders, noting that he never used the specific words “trash talk.”  No, but his point was clear.

He proudly noted his courage in introducing himself to Mason after the game.  Scarbinsky does not pick up, however, that the friendly and gregarious Mason responded to his greeting with two words.  If you know Mason at all, that is telling.

Besides the obvious missteps, Scarbinsky is also reflecting the attitude that seemed to have crept into the articles and tweets of many Alabama beat writers: a smug inevitability about Alabama’s success.  Some writers buck the trend: Marc Torrence of the Crimson White is an exception that might surprise you.  Aaron Suttles of the Tuscaloosa News is another.

I don’t want to go into too much detail.  I don’t want the orange and blue to obscure the page, and it’s true that Alabama provided a lot of success to be smug about.  But there seemed to be such a grasping for a dynasty narrative — both locally and nationally — that it seemed to creep into the tone of the articles.

Pete Thamel on Texas and Gus Malzahn — This was amateur hour on so many levels.  It’s no wonder that it produced a mere blip on the radar, soon forgotten.  First, let’s start with Thamel’s gem: the one piece of information that seemed to qualify as reporting.

“According to a source, Malzahn has told friends privately that coaching the Longhorns is his dream job.”

That’s it. Thamel fills the rest with his opinions.  The article is titled “Viewpoint,” so it can be expected to reflect opinion.  But as I tell my sports reporting students, a column is supposed to be a reporting exercise.  The best columns give readers information, not just shallow analysis.

On that count, this article fails.  Let’s look at how.

First, note that Malzahn did not say that to Thamel’s source directly.  The source knows that Malzahn has told this to other people.  Not firsthand. Not secondhand. Thirdhand.

Thamel stops at that one sentence.  No further background or information from this source on why Malzahn feels that way.  No poignant descriptions of seeing Texas play as a kid.  Just one sentence to run with.

If I’m not mistaken, the reports of Saban’s interest in Texas were just as poorly sourced and researched.

Second, Thamel does no other reporting on this.  Just out of casual interest, my curiosity piqued, I did a Google search.  Typed in “Gus Malzahn” and Texas.

Guess what I found out on Wikipedia?  Malzahn was born in Irving, Texas.  (If that induces irrational panic, seek help.)  I’m not presenting that as any big revelation.  By his high school years, he had moved to Arkansas, where he would go to school, work and live for at least the next 22 years.

My point is that Thamel could not even be troubled to look up or include that fact or anything else in his column.  He took one thirdhand, anonymously sourced quote and made it into a column.

As I told my students walking into class, “You guys know what I do when you pull a stunt like that in one of your assignments.”  Sometimes they will drop an interesting morsel into an article and then abandon it because, at this point in their journalism development, they get distracted or maybe a little lazy.

That fact is usually circled, with a comment in the margin: “You opened this door. Now you gotta walk through it and do the work. Don’t leave your reader hanging.”

But Thamel is supposed to be a seasoned, well-paid pro, not a college junior trying to juggle school, work, and a football team that produces Internet obsession-worthy content.

The writing and, yes, even the YouTubes have enhanced the memorable week that it is.  A late addition from a TWER reader — a column in the Stanford Daily— was a Thursday treat for us.

In a week of memorable sports journalism that showed what can be when event and writing combine, Scarbinsky and Thamel sadly showed also how bad it can be.