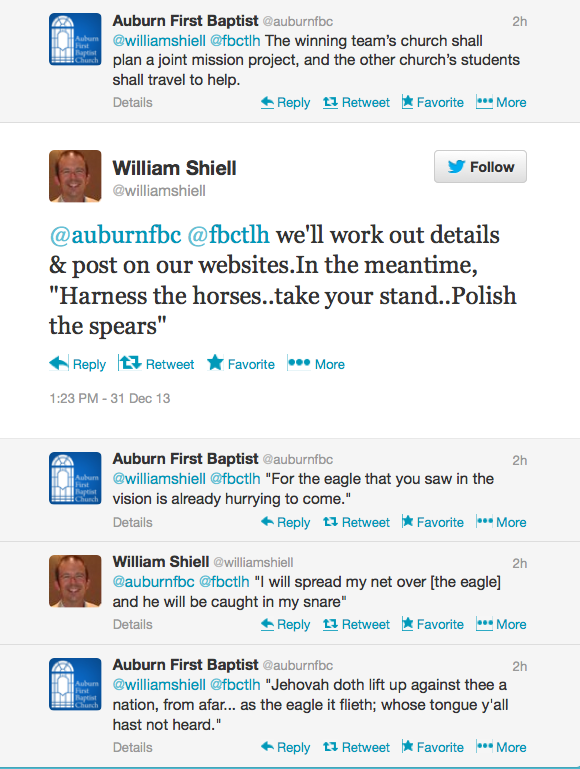 The First Baptist Churches in both Auburn and Tallahassee are engaging in some social media scripture slinging this New Year’s Eve by citing as many Auburn and Florida State mascot-related references from the Bible that they can. Depending on how much stock you put in the Apocrypha, Auburn is either down, or in the lead, by one.

It started Monday morning when FBC Tallahassee senior pastor William Shiell asked (the Twitter accounts of) both churches which team they though would win the national championship game. Auburn First Baptist replied shot back not with a score, but with a verse, and it was pure Malzahnian misdirection: Not Isaiah or Revelation or anything, but a verse from freakin’ 2 Esdras 11:5: “…the eagle flew with its wings, and it reigned over the earth and over those who inhabit it.”

“It’s on,” Shiell replied before tweeting a verse from 2 Chronicles about spears, which then led FBC Auburn to go straight up the middle with a verse from Psalms. 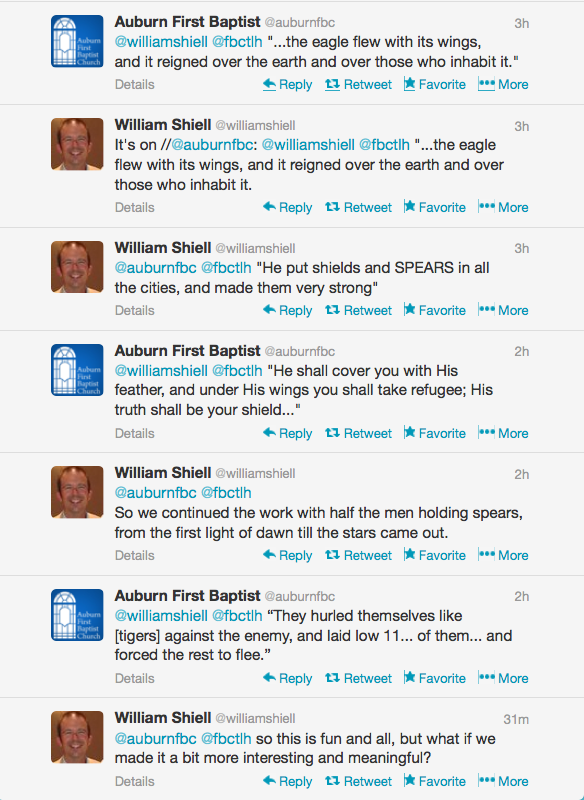 All Shiell could muster was another spear verse again, from Nehemiah, which FBC countered with not only MORE Apocrypha (this time from Maccabees—more like Smaccabees), but some creative editing.

2 Maccabees 11:11 reads: “They hurled themselves like lions against the enemy, and laid low eleven thousand of them and sixteen hundred cavalry, and forced all the rest to flee.”

Here’s what FBC Auburn tweeted: “They hurled themselves like [tigers] against the enemy, and laid low 11… of them… and forced the rest to flee.”

An hour or two later, Shiell replied: “@auburnfbc @fbctlh so this is fun and all, but what if we made it a bit more interesting and meaningful?”

We presume we’re about to learn what Florida State fans consider the spiritual equivalent of Bradley’s sausage. Stay tuned.