It was the greatest game in the history of the world, and that includes the very bottom of it: 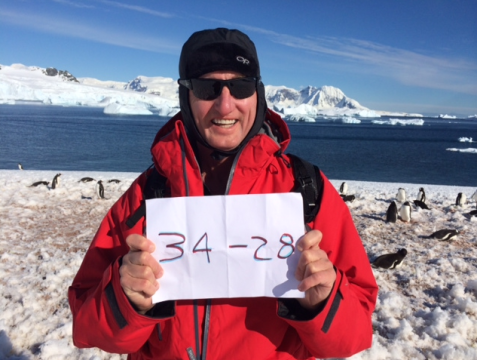 We’re told his name in Steve Vinyard. He’s an Auburn grad (class of ’83, we think). He sent the photo in an email to his Auburn pals (from his i(ce)Phone!) that read “Greetings and War Eagle from Antarctica.”

We’re trying to interview him to find out more about what it’s like to watch the greatest moment in sports on a giant block of ice. And about the tradition he’s continuing.

Nope, this ain’t the first time folks have gloated over the evil empire from a place with no trees to poison.

In fact, unless there’s, like, a Kinkos or a Sign World or something down there, some people actually printed up and took with them to Antarctica a large banner celebrating the index finger before it even shot up. That’s how guaranteed things were during the Streak. Check it out here.

[UPDATE]: Turns out it’s pretty to get a hold of someone in Antartica. Who knew…

Was in the Atlanta Airport during the game. The last play I saw(in an Airport Restaurant) was the 99 yard Alabama TD , so I was not feeling great about the game when I boarded the plane.

Very close to the time that the cabin doors were supposed to close( and therefore I would have to turn off my phone) my wife (Gena)called to tell me that Auburn had scored. She is not football fan but did a remarkable job explaining the last few plays of the game, included the 1 second rollback of the clock, the new freshman kicker, the missed kick and of course the 109 yard run back . She couldn’t believe what she was seeing, and I couldn’t believe what she was saying.
Just about a minute after the game ended we got the announcement to turn off our phones etc.
Found some wifi the next day in Buenos Aries , Argentina and watched all the replay highlights I could find.
It was a great day and it was just like Gena had described. I am on an expedition cruise on the Silver Explorer Ship. 108 passengers from different parts of the world. No other AU/ AL fans.