War Eagle! It’s time to turn our attention to the one thing we all love, and that is beating Bama. Let us harness the power of the past to slay the crimson dragon that dare enter our lair.

The first two items are from my collection. 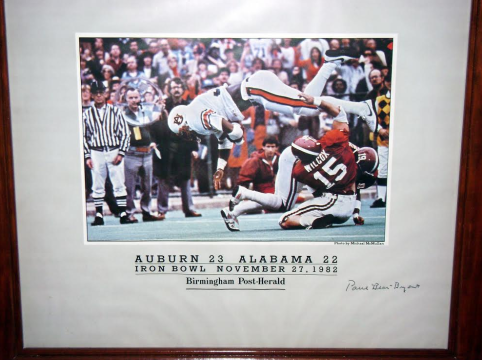 Yes, you read that correctly. A friend of the family was a cameraman for a Birmingham TV station that filmed the Bear Bryant Show back in the early 1980s. He was a huge Auburn fan and absolutely despised Alabama. However, he and the Bear developed a friendship of sorts. Somehow he managed to get Bear to autograph the print. He gave it to my grandfather as a gift. This was the play before Bo went Over the Top. This may be the only Bear Bryant autographed Bo Jackson print in existence. 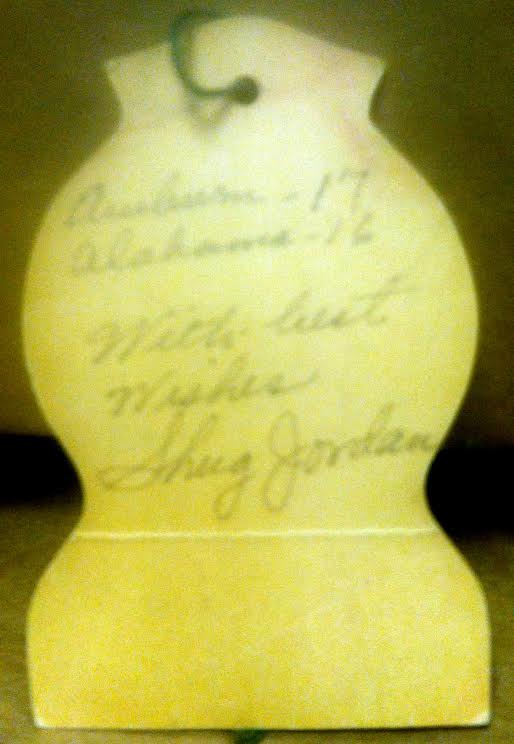 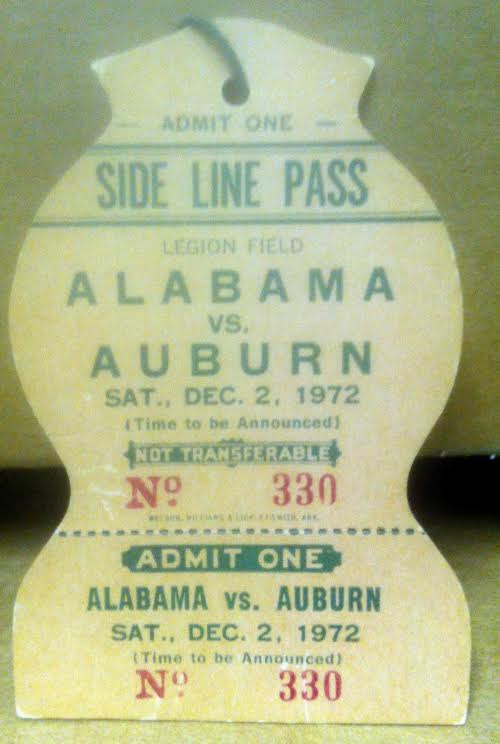 After Auburn’s 17-16 win over Alabama in 1972, Dad wrote Shug a letter of congratulations. In return, Shug sent this sideline pass from the game and signed it. Dad displayed the pass in his office for years until he donated it to the Lovelace Museum in 1996. The pass was included in the “Amazins” display case until the museum was relocated to the Auburn Arena. 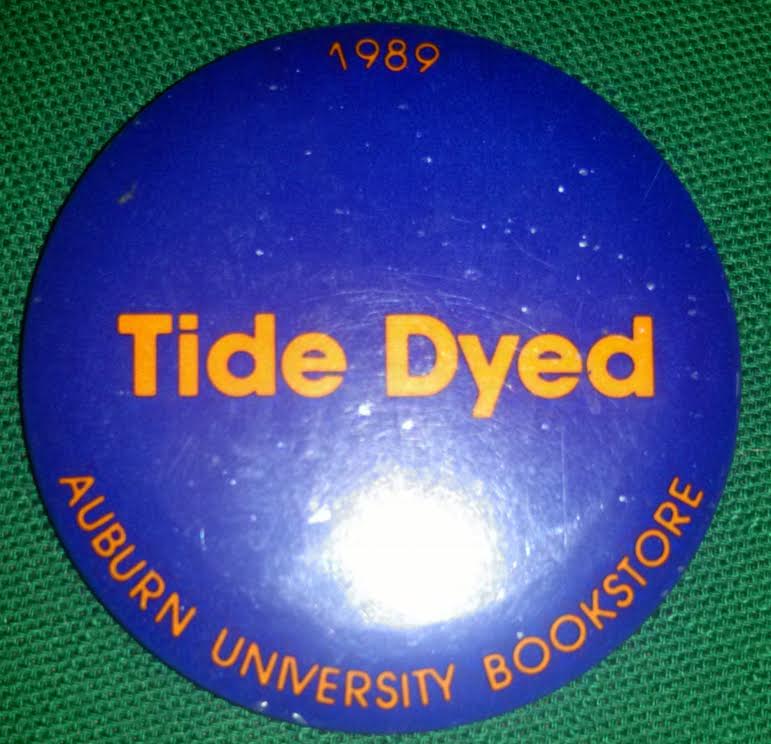 Simple and Sweet. This is the Mother of All gameday buttons. 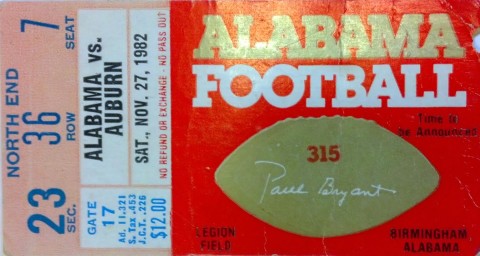 “Alabama was the “home” team and got to print the tickets. $12 was all I paid to see Bo go over the top. According to the ad on the back of the ticket, you could return the stub to a Birmingham-area Krystal and get six burgers for the price of three. I didn’t take them up on that.”

I refuse to make a joke about Alabama fans and Krystal’s. Anyway, Alabama fans are upset that Cam Newton’s picture is on this year’s Iron Bowl ticket. The 315 on this ticket was a not-so-subtle reminder to Auburn fans of the 1981 game when Bear set the career wins record. We can play that game, too. 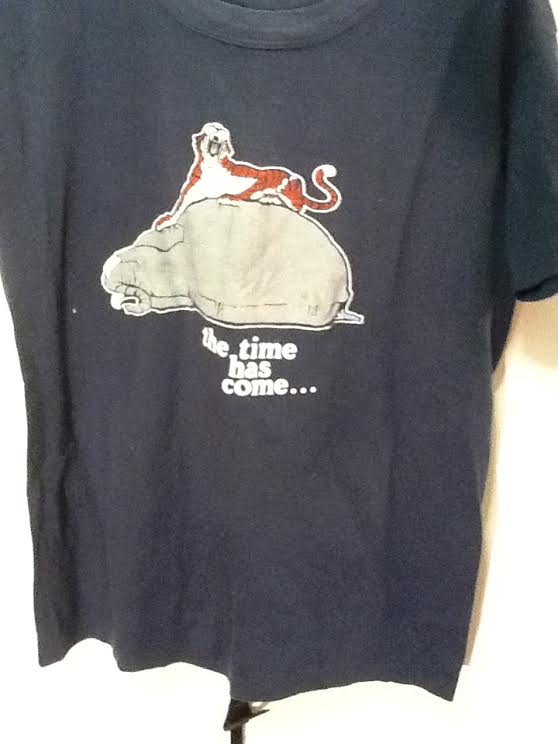 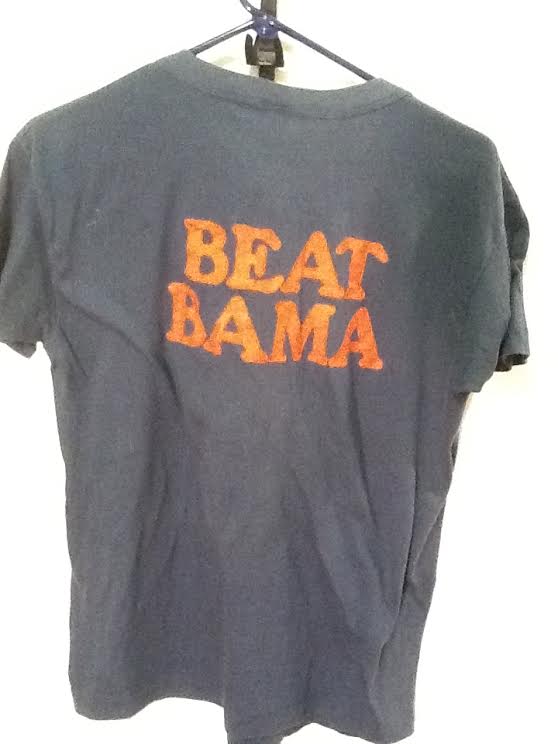 “After having changed majors, I was delayed in graduating and had to go another summer and fall to finish my degree. So, I had the benefit of a fifth football season as an AU undergrad. Au had a good team in 1982 and after losing to bama for so many years you thought there was a chance to finally win and break that streak. But after playing Georgia close, you just knew it was going to finally happen. The feeling in the days leading up to the Iron Bowl was palpable – it was a growing confidence that Auburn had finally had enough and things were going to be different. So, at J&M Bookstore, I couldn’t pass on buying this t-shirt with the saying “the time has come … Beat Bama.” Bo went over the top, and the time HAD come. I have a vivid memory of the field being inundated with fans, a goal post coming down with one of my crazy pals on board, and then Coach Dye and the players coming back onto the field from the locker room. Amazing. I think the time has come again. WAR DAMN EAGLE!”

-Submitted by Mike Skotnicki, who wrote a book you should totally read.

The time had come, indeed, Mike. 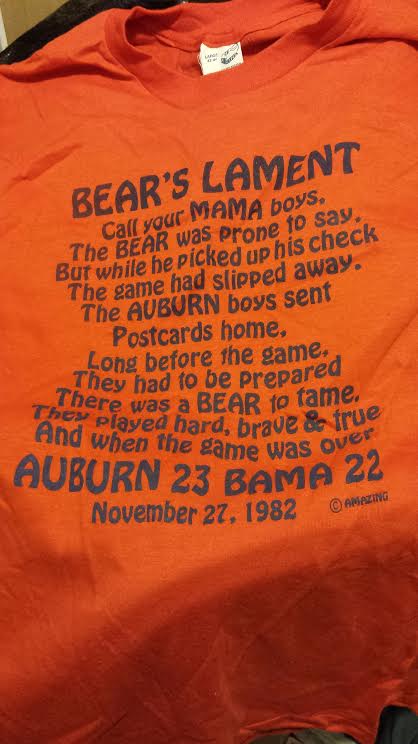 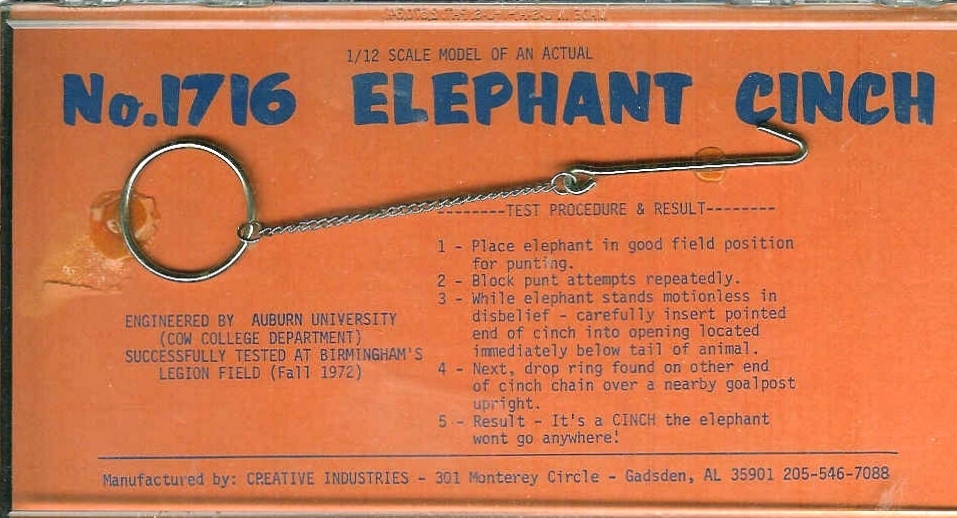 “My sister enrolled at Auburn in the fall of 1972.  It was a great year in our household- we were close to the Fred Walls family whose son Randy was our QB, and the ‘Ugly Duckling’ even came over to my house once or twice and tossed the football around with 7 year-old me in our front yard (actually Lee Gross came once and snapped as well, but that makes this story completely unbelievable so I typically leave that out).

“So at Christmas (I think) my sister brings this back home from The Plains.  It has evaded my rediscovery for years, but less than an hour ago I found it way back in an old drawer at my parent’s house.  I knew immediately I had to send it along to you. War Damn Eagle!”

I really love this Relic, right down to the “SUCCESSFULLY TESTED AT BIRMINGHAM’S LEGION FIELD (Fall 1972).

Thanks to all who submitted these great Relics. It’s been a great edition. If you have any vintage/classic/special items you would like to share with the Auburn Family, please e-mail me at [email protected] or tweet me @AU_History. As always, a big “War Eagle” to the Godfather of War Eagle Relics, Mr. Riley Downing (@FearlessandTrue). You can check out previous posts here.

* Yet another parallel between Alabama’s first trip to Jordan-Hare Stadium and their first trip to Jordan-Prayer Stadium
* Auburn fan who ran onto the field during the 1969 Iron Bowl tells all!
* More like the BUST Bama pep rally…
* The Snorg Tees Girl in a 1987 Auburn Iron Bowl victory T-shirt
* This song about the 1969 Iron Bowl is awesome
* A rap about the 1989 Iron Bowl
* Aubie romances early 80s coed on Bear skin rug
* David Housel’s radio address before the 2002 Iron Bowl