Do Tennessee, Arkansas and Kentucky hate us now?

Well, let’s be honest–they already did. We’re Auburn. Everybody hates us.*

But, no–do they hate us worse than usual, this year?

After all, when the 2013 season began, the biggest “reclamation” projects in the conference were Auburn, Arkansas, Kentucky and Tennessee. Those were the four “joke” teams by the end of 2012. Those were the four teams that in late 2012 had to gaze admiringly up at the relative might and magnificence of Mississippi State. They had to dream of a day that they could once again match the relevance in SEC football of Vanderbilt.

And now here we are, scarcely ten months removed from the end of a season in which those four teams dragged their nearly lifeless corpses across the finish line. All four blew their coaches out and started over. All four understood that improvement would require lots of work, lots of recruiting, and above all else, lots of patience.

Indeed, Tennessee has found some small measure of success, with their admirable victory over South Carolina. Kentucky seems to be headed in the right direction, albeit very, very slowly. And Arkansas? Well… they almost beat Rutgers!

Oh, wait. What about Auburn? Has Auburn made any sort of measurable progress? Has there been the slightest bit of improvement on the Plains? Perhaps only a close loss to Miss State this year, or maybe beating a directional team without going to overtime to do so? Or maybe–wait, sorry, excuse us a moment. Back in a second.

[Van and John have a quick discussion about which team Auburn might face in the Sugar Bowl.]

Okay, sorry about that. We’re back.

So–what were we saying again? Oh– that’s right. Do Arkansas, Kentucky and Tennessee hate us now?

** “Renewed” being a relative term, of course, with regard to Kentucky.

Thoughts on the Arkansas Game

–       Nick Marshall’s injury and potentially having to miss the game and Arkansas’ poor run defense led Auburn to create a conservative game plan.  Once the game got going and Auburn was in control, the Auburn coaches saw no reason to adjust that game plan at all.  So it was a simple straightforward “here comes Tre Mason – try and stop him” game.  Arkansas could not stop him.  Game over.

–       We are mystified, however, by the heavy leaning on Mason to the exclusion of the other backs in this game. Yes, we know Mason is good. (Just how good–or great–has been the subject of much discussion of late. Where would you rank him on the list of Auburn’s all-time backs??) But do you really only give Cameron Artis-Payne one single carry? One carry, in a game where the run was most assuredly there all night? And virtually the same for Corey Grant? It boggles the mind. The only answer we’ve heard this week is that the coaches “went with the hot hand,” as well as the old “flow of the game” response. Your intrepid Wishbone columnists are not entirely satisfied with that answer, to say the least.

–       We do think that Auburn will need to pass the ball more often and more effectively to beat Georgia and Alabama.  So why only 10 pass attempts against the Hawgs?  Because one of the few chances Arkansas had to mount a comeback in the game was for Auburn to pull a 1994 LSU Curley Hallman/Jamie Howard scenario.

–       How far has this team come?  They beat an SEC West team on the road by 18 points while only throwing nine passes the entire game, and did not play particularly well while doing so.   The tackling by the defense was not great and the special teams have played better. And still. 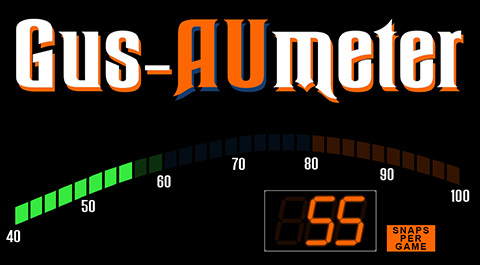 The Hurry Up No Huddle offense of Gus Malzhan has not exactly broken the land speed record this season.  Here are the average plays per minute of possession for Auburn’s games this year: 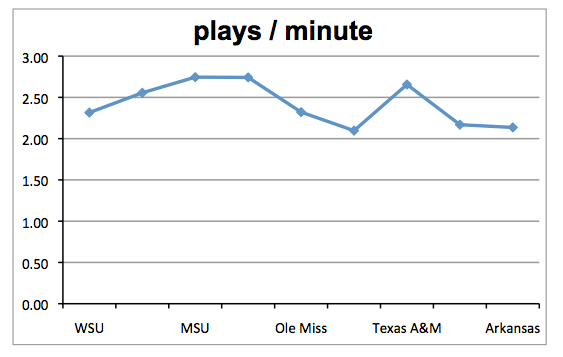 This graph shows the offense getting faster each week and then gradually slowing down (other than the Texas A&M game).  It’s about as good a bit of empirical evidence as could exist to show that the “HUNH” has, for the most part, given way to a pure power-running attack.

Tennessee:  Volunteering to get run over by the Gus Bus?

Anytime Auburn travels to Knoxville it reminds us of one of the greatest Auburn road games in history – a definitive statement of football domination by the 2004 team.

Several weeks ago this game looked to be much more dangerous.  Now UT has been crushed two weeks in a row by Alabama and Mizzou and the Vols are down to their 3rd string quarterback.  This Tennessee team has played six really good quarters of football – the second half against UGA and the entire game against South Carolina.   Unfortunately, both of those games were at home, and that is where Auburn must go on Saturday.

(And, just as an aside–doesn’t the above seem sort of backwards? Shouldn’t your run defense ranking go down after Auburn has run the ball all over you–not before?!)

The young quarterback for UT, Josh Dobbs, will be dangerous to SEC teams over the next few seasons, but he isn’t a threat to lead an upset against this Auburn defense.

We anticipate Auburn coming out and doing exactly what they’ve done the last few games, whether the opponent was an Arkansas or a Florida Atlantic: Jump on the other guys early, run the ball down their throats, alternate between “pace and tempo” and more time-consuming drives, be opportunistic on defense, and be excellent on special teams. If the Tigers can keep that train (or Gus Bus) rolling in that same way they have been of late, it’s hard to see a way short of a catastrophic collapse or epic turnover-fest that the Vols come out on top. A loss is of course a realistic possibility–they aren’t Western Carolina, obviously–but the trends on both sides seem to indicate an Auburn win, likely by double-digits.

Alabama  (Since playing Texas A&M, Alabama has faced six teams with an average record of 3-6.  We will learn a lot about Auburn’s chances by watching LSU against them this weekend.)

Auburn (Peyton Manning is not walking through that door, Vols!)

Missouri (Will they lose the SEC East in their upcoming games against the SEC West?)

Texas A&M  (Looks back at Big 12 longingly after realizing that 4th in the SEC West is a real possibility in one of the best seasons in school history.)

LSU  (Les Miles will need to be at his Les Milesiest this Saturday night.)

Tennessee  (They play better at home than on the road but they don’t have the talent at the offensive skill positions to compete every week with the best opponents.)

UGA  (With Gurley in lineup = very dangerous team, without Gurley = a good quarterback with no run game and a bad defense.)

Florida  (Florida’s offense is now about as dangerous as a family of squirrels.   Small ones.)

MSU  (Dak Prescott is the new hope!  Until the next new hope comes along…….)

Kentucky  (They have gotten better.  But that is relative.)