To people from the outside – the national media, other college football fans, the general public—this year’s Iron Bowl is about two of the top four teams in the country playing for a spot in the SEC Championship Game and potentially the final BCS National Championship Game.  For them, there’s not a huge difference between this game and, say, FSU-Clemson or Oregon-Stanford.

We who live within the confines of this rivalry, of course, know differently. Very differently.

For the Auburn Family, this game is about who we are and how we see ourselves, far more than it is about how others see us from the outside.  For us, this is about Alabama knocking us down in the dirt and kicking us in the gut for the last two years, and telling us that was the natural order of things and that was how it was always going to be from then on. They told us that we were not a threat to their dynasty—and for the last two years, sadly, they were right.

But if there’s any story we as Americans love, it is the story of redemption—of the downtrodden kid pulling himself up off the ground by his own bootstraps, setting his jaw—and punching the bully square in the mouth.

When Gus Malzahn returned to the Plains less than a year ago, the days of the beatdowns by the bullies ended. Now, when other teams start pushing Auburn around, the Tigers push back—hard. And they just keep coming.

So, in sum: Saturday is not about the BCS. It’s not about winning the conference.  It’s not even about the SEC West and a trip to Atlanta.

Saturday is about two universities that divide the loyalties of a single state. It’s about redemption and revenge. And it’s about the Alabama Crimson Tide learning a much-needed lesson in humility.

It is time for Alabama to go down. And they must go down hard.

1)   The single most important factor about this game is the location.  More than any specific position matchup, the game being in Jordan-Hare is going to help Auburn.  Bama has played three road games this season – at Texas A&M, at Kentucky and at Mississippi State.  Against Texas A&M, Bama gave up THE MOST YARDS IN SCHOOL HISTORY.   Despite the fact that it was only two months ago, most people like to pretend that didn’t happen.  The Tide also beat a terrible Kentucky team in Lexington and two weeks ago in Starkville played one of their worst games of the season against MSU.  In Starkville this “unbeatable juggernaut” committed four turnovers and only converted on four third downs.  The score was still only 10-7 in the third quarter.

In the 1989 Auburn-Alabama game—“First Time Ever”—the score stood at 10-7 Alabama at halftime.  The home team Tigers came out and played a great second half.   A big part of that comeback was the crowd in the stadium that day.  That crowd was not going to sit quietly and watch Alabama come into Jordan-Hare for the first time in history and claim a victory. They were insanely loud and they helped to will Auburn into the lead.

The matchup of the Alabama offense and the Auburn defense would seem to favor the visitors, but home field advantage can help neutralize that.   As we saw in the Georgia game last week, the noise was so loud in the stadium that the offensive tackles could not hear Aaron Murray and had problems with false starts and trouble blocking Auburn’s defensive ends.  Do you think it will be quieter this Saturday?

3)   Gus Malzhan has been planning for this game since he got the job.   He was the offensive coordinator in 2009 when a vastly undermanned Auburn team pulled out all the stops attacking an Alabama team on the way to the national title and almost beat them.  Before the 2013 season ever began Gus Malzhan and Rhett Lashlee sat down and laid out an offensive game plan that revealed and utilized parts of this offense week by week.  They knew this game was coming.  They didn’t know what would be at stake or how good this Auburn team would be, but they knew that Alabama was coming to Auburn and that they needed a plan that would give them a chance of success.  So they have shown formations and plays all year long setting up tendencies and reads for the Alabama coaches and defense – which they have planned to take full advantage of.  They want the Alabama defenders to be well-prepared and reading the keys properly so that when the Tide sees a certain formation or a certain action developing during the play, they will react in predictable fashion—and then something different will happen on Auburn’s side.  Nothing will be as it appears.

How does the run defense of Alabama compare to Georgia’s? Because we are supposed to believe the Tide’s defense is infinitely better than anyone else’s, of course. But let’s just take a look:

It seems that Alabama and UGA performed at about the same level in stopping the run against these two common opponents.  And how did Auburn’s rushing offense do against UGA?? (Hint: Very, very well.)

Here are some direct comparisons between Auburn and Alabama in SEC games this season:

Not seeing the domination here.

Hmm. Still not seeing it.

Did Alabama perform so much better than Auburn in those games?

6)   Auburn has played in close games and won close games this season.  As a result of being so good and playing so many bad teams (Alabama has played four teams with a winning record so far this season), the Tide has not been in a close game all season.   Looking only at the scores, the Texas A&M game appeared close for them, but it was never really in doubt.   This Alabama team has not been battle-tested in a close game in which they are required to make a play with the pressure on.   What happens if they need to do so?  They certainly won’t have experience to rely upon.

7)   If there’s one thing we know, it’s that Auburn won’t be shut out this year. The Tigers will score points.  The key to the game will be how well Auburn can limit Alabama from doing that. The key to the game, therefore, is Auburn’s defensive line against Alabama’s offensive line.  Can Auburn stuff the run at the line?  Can Gabe Wright and Montravius Adams get pressure up the middle?  Will the crowd noise cause the Alabama tackles to be slow off the start, thus giving an edge to Dee Ford and Carl Lawson?  One of Alabama’s starting offensive linemen, the lesser known Kouandjio brother, Arie, has an injured ankle and didn’t practice Monday.  If he isn’t 100 percent or if doesn’t play or has to come out of the game, it could become a turning point in the game.  If Alabama has to change players, will it disrupt the continuity of the line? If Kouandjio plays and isn’t 100 percent, will he be able to hold up against the Auburn defensive line? (And what about rumors surfacing on Wednesday that another Alabama lineman was injured in practice this week?)

8)  We of the Wishbone understand that you, the Auburn fan, probably aren’t excited enough about this game yet. You require added hype and excitement to really get the blood pumping. So we suggest you watch this. And then watch this. And by all means go and listen to this. And this.

All done? Okay. Now you are ready for Saturday.  You’re welcome.

9)  Normally Auburn has an edge over any opponent it plays in special teams.  But in this case the special teams may be a draw.  Alabama is excellent on punt and kick coverage and they have blocked three kicks this year – something that should be a concern after what happened last week against UGA.  Auburn’s kicker and punter this year have been excellent at preventing the other team from getting a good return (or any return) and that will be important in this game as Alabama has dangerous kick returners. 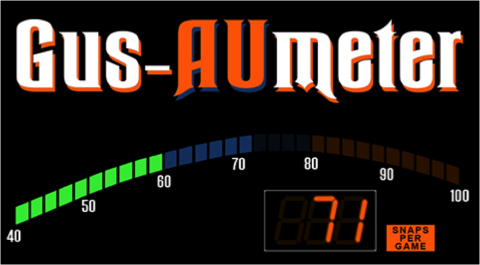 Auburn has averaged 71 plays per game this season. But we saw Malzhan and Lashlee break out the up-tempo pace against UGA last week to very nice effect, and we expect to see it again this week.

In fact, Gus has made the argument before that the only way to run against the middle of Alabama’s defensive front is to use pace to catch them before they’re entirely set or ready.

Auburn’s three highest play totals this year came against LSU, Texas A&M and UGA – 84 or 85 plays each.   Those are games where Auburn needed the faster pace to help the offense.   We expect to see it again this week.  Why?  Because it works and (arguably) more importantly because Saban hates it.

Alabama  (For only a few more days, we hope.)

Auburn (Bring it on.)

LSU  (Tired of turkey? Have some pork on Friday.)

Ole Miss  (At least they can close out their season with a win over MSU in the Egg Bowl.)

UGA  (Farewell Aaron Murray. You deserved a better exit, but we’re not sorry to see you out of Athens.)

Vanderbilt  (Is Patton Robinnette the most Vanderbilt name ever?)

Florida  (Georgia Southern. And, good heavens, but how do you have two players blocking each other?!)

MSU  (Watching them against Arkansas was like watching two guys flailing at each other with large fish for three hours.)

Arkansas (At least they get MSU – wait! Oh darn.)

Kentucky  (Please use that fake jump pass against UT again.)

* Yet another parallel between Alabama’s first trip to Jordan-Hare Stadium and their first trip to Jordan-Prayer Stadium
* Auburn fan who ran onto the field during the 1969 Iron Bowl tells all!
* More like the BUST Bama pep rally…
* The Snorg Tees Girl in a 1987 Auburn Iron Bowl victory T-shirt
* This song about the 1969 Iron Bowl is awesome
* A rap about the 1989 Iron Bowl
* Aubie romances early 80s coed on Bear skin rug
* David Housel’s radio address before the 2002 Iron Bowl