This week Auburn once again plays host to the Bulldogs from the University of Georgia.  While our rivalry with Alabama has become toxically and unhealthily bitter over the last decade (and we of course blame them), the Georgia series has for the most part been viewed as the more brotherly, the more neighborly of the two.  But as the Pat Dyes and Vince Dooleys have faded from the stage of college football, the Oldest Rivalry in the Deep South has turned a little nasty.

In the old days Auburn students held a “Burn the Bulldogs” parade where they built huge floats and then set them on fire.  They did this because it was fun, and because they were college students and why not built a float and set it on fire for whatever reason.  But they also did it because it was Georgia week.

Oddly enough, as everyone who visits this site regularly is well aware, Auburn has also been known to turn the water hoses loose on Dawgs fans—thus showing that, for a rivalry renowned for its “friendliness,” we of Auburn have been quick to unleash both fire and water upon the Georgia faithful (or at least their representations). It’s all somehow very Biblical, and also somehow appropriate. Set the Bulldogs on fire, and then put them out. Out the door to do their business where we don’t have to see it.  Out of luck, out of bounds and out of order.  Not to mention out of their misery, maybe—and out of ours.  Over and out.

How did the rivalry get so nasty?  Let’s review:

2012: UGA destroys Auburn 38-0 in Auburn.   As the game went along it was clear that the Tiger offense was no danger of coming back to win the game.  But UGA defensive coordinator Todd Grantham left his starters in until the very end of the game, yelling at them and exhorting them to keep the shutout intact.   UGA had a matchup with Alabama in the SEC Championship game a few short weeks later – what if one of the key UGA defenders had gotten injured on a meaningless snap in the 4th quarter of a blowout?  That didn’t matter to Grantham.   Attention, Tigers fans: Remember what he did.   Remember the Grantham!  If Auburn finds itself in position to either take a knee to run out the clock or go ahead and punch the ball in the end zone to add another score to the tally at the end of a win against Georgia… Well, you know what they should do.

2011:  In “revenge” for the “terrible things” done to them by the 2010 Auburn team, UGA crushed Auburn 45-7.  Those terrible things, you may recall, consisted of sacking their precious quarterback too often for their tastes and coming back from a 21-7 deficit to beat them down. They of course exacted some measure of revenge during that 2010 game itself, by delivering late hits to Cam Newton that were not called by the ref nor referred to by the Georgia fans during their incessant whining after the game. Lord, UGA fans—it’s honestly a miracle you haven’t been hosed down by every other team in the league at some point!

2010:  We have written plenty about this game already but the story bears repeating.

Despite trailing by 18 points to a superior team with less than 2 minutes to go, UGA head coach Mark Richt left his starting quarterback in the game and continued to try and pass the ball downfield.  When his quarterback was sacked yet again, the players on the Georgia team became upset and attempted to take out Nick Fairley.

Watch this video again at the 1:08 mark.   In 2013 the Targeting rule has created a lot of headlines, but on this play UGA players abandon the play in an attempt to intentionally injure an opponent.  And again – it was preventable by Mark Richt.

For a more complete history of our memories of these games see this little slice of epic history.

1986   Auburn was upset by UGA in Jordan-Hare and Georgia fans stormed the field and refused to leave it despite repeated requests.  With Pat Dye’s blessing, the architect of the stadium’s awesome drainage and irrigation system turned the sprinklers on them!

This was a moment that will live in AU-UGA infamy (or, at least for us, famy—if that’s a word. Hey, you know what we mean). It gave rise to Aubie carrying a hose and water-sprayer pistol the next season. It gave rise to years of harder feelings between the two fan bases. And it gave rise to the simple yet profound statement: NOTHING STINKS LIKE A WET DAWG.

We of the Wishbone think it might just be time to break out the hoses on this bunch again. We’re watching you, dawggies. You’d best behave this time.

A Running Tour of Tennessee

In case you haven’t heard, Auburn ran the ball on Saturday. They ran it and ran it and ran it some more. Tennessee players are even now waking up from a deep sleep and spinning around in bed as they imagine Nick Marshall zipping past them, the ball under one arm and their girlfriend under the other. Meanwhile, Auburn as a team threw fewer than ten passes the entire game. Much has been said and much ink spilled over this situation. What should we of the concerned Auburn family think of this?

Gus Malzahn and Rhett Lashlee have removed their egos from the equation of play calling.  If they don’t need to pass… they won’t.  It doesn’t mean that Auburn cannot pass – passing is just riskier than running it, and the Auburn offense hasn’t needed to take any risks to beat two SEC teams on the road by big margins.

The Auburn special teams had one of the best days in the history of college of football on Saturday.  The Tigers set the NCAA record for average return yardage and would have set the record for total return yardage in a game with only a mere 60 yards more.

Overall the Auburn team played much better than the week before against Arkansas.  It bodes well for the final two stops on the regular season schedule. 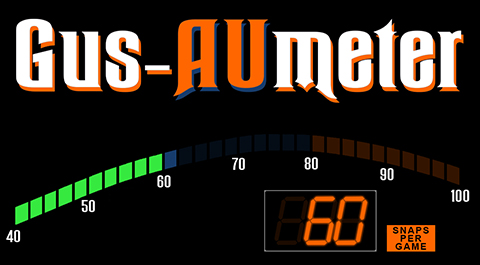 Gus didn’t need to accelerate the tempo this week since the special teams were scoring or ripping off huge chunks of yards.

Unlike the Arkansas and Tennessee games, Auburn will be facing a team with an excellent quarterback and a dangerous offense.  While injuries have derailed UGA’s season (along with the ever-present unrealistic expectations) they are getting some players back in time for this weekend’s game.   Auburn does not get to play the same UGA offense that Vanderbilt got to play – the team that comes into Jordan-Hare on Saturday will be more like the team that beat LSU 44-41. Todd Gurley is the most important player who has returned from injury, and while he hasn’t appeared to be 100% healthy, he is still one of the best running backs in the country.  In his first game back, when he appeared to be about 50% of his normal potential, he had 187 total yards and two touchdowns against a good Florida defense.  Without him the UGA offense is overly dependent upon quarterback Aaron Murray to carry the load and becomes too one dimensional.   With Gurley a defense must focus on stopping him, allowing Murray to take advantage of play action opportunities.   This is the best offense Auburn has faced since Texas A&M and they will move the ball up and down the field against this Auburn defense all game long.   Auburn needs to force a few turnovers and hold UGA to a few field goals to win what should be a high scoring game.

Did you know that the UGA has turned the ball over eleven times in its last four games?  If the visitors from Athens come into Jordan-Hare and turn the ball over 3 or more times against this Auburn team they have no chance of winning.

Can the Auburn offense score enough points to win?  Absolutely.   Do not be misled by the lack of passing attempts the past few weeks.   Auburn didn’t pass because it wasn’t necessary to win.  Why do something risky when you don’t need to?  Some people have decided that this means Auburn cannot pass the ball well against SEC team.  Do not believe it.  Against Mississippi State (who is 9th in the SEC in pass defense – UGA is 13th) Nick Marshall completed 68% of his passed for 339 yards with two touchdowns, two interceptions and a quarterback rating of 159.  He also drove the team down the field at the end of the game when the other team knew he had to throw it and led Auburn to a victory.  Auburn can pass the ball well.

The Auburn offense is doing what it does well and what it needs to do to win football games.  UGA will be completely focused on stopping the running game.   And when they all come up to take advantage of that, Auburn is going to start throwing the ball and make them pay for it.  Auburn won’t need to throw it 30 times, but 20 or so pass attempts will be enough when combined with a strong rushing performance to beat UGA in a high-scoring shootout.

Alabama  (The LSU game didn’t reveal a lot of weaknesses.)

Auburn (Hey Todd Grantham – we are coming for you!)

Missouri (Can they win at Oxford next week?)

UGA  (With Gurley = very dangerous team, without Gurley = a good quarterback with no run game and a bad defense.)

Vanderbilt (They beat Florida and Georgia?? This will be a season they will remember always. And a feat they will probably next repeat sometime in the 23rd Century. Cue the Star Trek music!)

Florida  (Florida was crushed by Vandy.  In Football.  Hello apocalypse.)

MSU  (With a loss to the Aggies and bama and Ole Miss coming up…….. things are not pretty.)

Arkansas (Well at least they aren’t paying a lot for Bielema.)

Kentucky  (UK fans have all tuned out since basketball season started.)