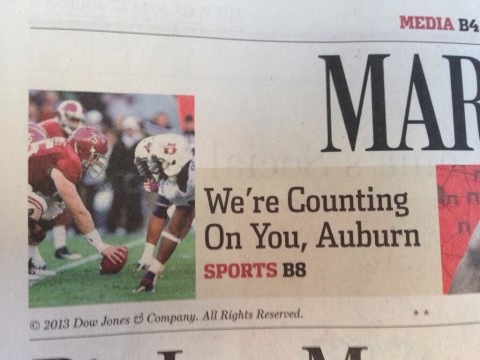 There’s an open letter from sports writer Rachel Bachman to Mr. Gus Malzahn in today’s Wall Street Journal, and Bachman just comes out with it: Auburn is American football’s last chance for salvation… because a third straight national title for the Crimson Tide would push the game to the brink of boring.

“Alabama is the only team that brings no mystery to the table. The Tide are simply so good, so methodical, that they seem to remove the element of chance,” Bachman writes, addressing Malzahn. “Without it, what’s the fun of watching? But you and Auburn, can change all that with one big game.”

When it comes to entertainment, Bachman feels the Tigers are the anti-Tide.

It seems that the Auburn football program was built as a thrill ride Just three seasons ago, when you were offensive coordinator at Auburn, quarterback Cam Newton led the Tigers to a national championship—including a regular-season comeback from a 24-point deficit against Alabama to stay unbeaten. The Tigers tanked last season, going 3-9 and firing Gene Chizik, the guy who coached that title game. Clearly, Auburn is not a place of half-measures.”

You have an amazing opportunity, Coach. You’ll have to get past a pesky Georgia team next Saturday in order to turn your game against Alabama into a tiebreaker for the SEC West title. But it can be done. Your team gained 437 yards against LSU in your only loss of the season, and showed its mettle in upsetting Texas A&M at raucous Kyle Field. You also have a better-than-average defense, 22nd in the nation in preventing scores.

Granted, Missouri has had a spectacular season in the SEC East, and is on track to reach the conference championship game. But do those Tigers have what it takes to stare down an ocean of crimson and beat Alabama at the Georgia Dome in Atlanta? Perhaps it’s better not to find out.

You can read the full letter here.

[UPDATE] And here it is in print… [via Julia Harlin Tilou] 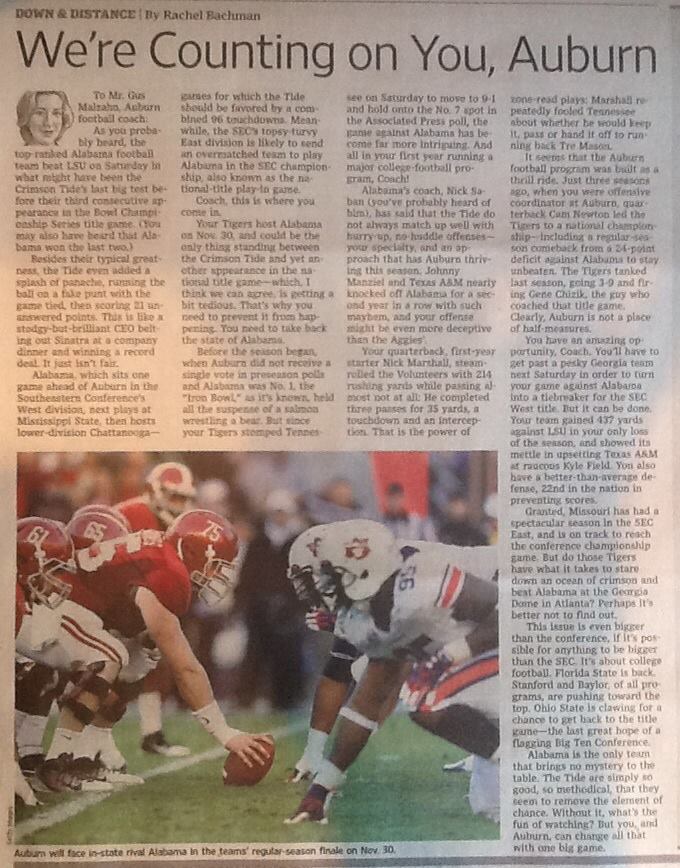