“Who remembers what shoot this was from?” Naya Rivera asked her Tumblr followers when posting this portrait of of her digitally, Deviantly drawn by superfan Tanya. 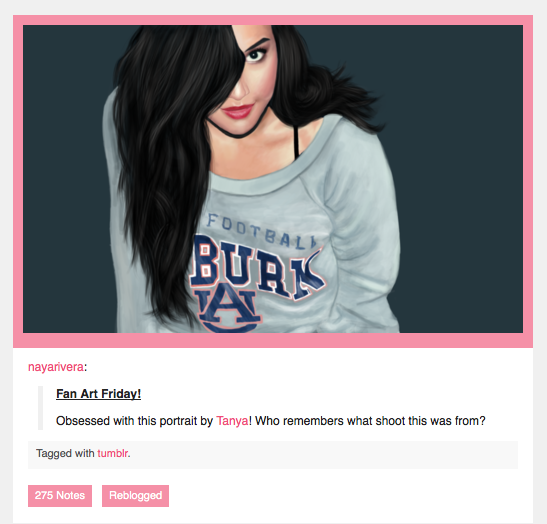 Um, well let’s see… definitely us… and probably the 40,000 plus people who have made this post of the photos from that shoot (for FHM) the 7th most popular post on TWER in the four wonderful years we’ve been documenting celebrities in Auburn shirts, too.

Naya says she’s obsessed with it. Because she Wore Eagle, obviously.

* Auburn in ‘Hoarders: Buried Alive’
* Meet the sexy Auburn grad student in ‘House’
* Cast member not allowed to wear Auburn shirt on History Channel’s ‘Bamazon’
* Katherine Webb in an Auburn bikini?
* Auburn students vandalize Jacks restaurant ’cause it looked too Bama
* The Auburn pennant on ‘General Hospital’ is back… and upside down
* There was a camel at Toomer’s Corner
* Driver of pickup truck with Auburn sticker shot during shootout featured on ‘World’s Wildest Police Chases’