Legendary University of Alabama supporter Bert Bank, who passed away in 2009 at the age of 94, created the Alabama Football Network and was pals with every Alabama coach from Wallace Wade to Mike Shula. He was also a former Alabama State Representative and Senator from Tuscaloosa, and lent his name to some notable legislation during the 1960s and 70s.

And he introduced legislation to abolish Auburn University—you know… as a joke. 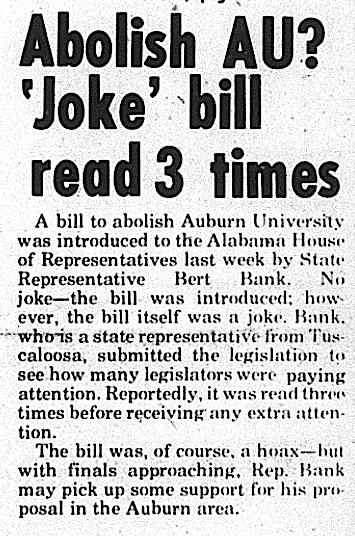 What is it they say about jokes—that there’s a little truth behind them? Especially after your team has two blocked punts returned for touchdowns in the final minutes of the game against your arch rival? I think that’s it.