Before the season began, reasonable Auburn fans felt that a successful 2013 season would result in a 7-5 or 6-6 record and a bowl game.  After the Ole Miss game it seemed realistic to think 7-5 or better.  But then Auburn went on the road and beat Texas A&M.   After a season in which the average margin of defeat for Auburn against the four toughest teams it faced was 32.8 points per game, winning on the road against a top 10 game was a huge leap forward.

Jimmy Johnson used to say that there are four stages to building a program (and these relate to how a team performs against quality competition):

Auburn was at stage two in early 2011 but by mid-season 2011 was down in stage one.  The feeling was that despite the fact that this team had more talent on it than the record from last year indicated, it would take time for the coaches to turn this thing around and fill in the talent gaps.  So the expectation was that Auburn would move up to stage two this year and potentially stage three in 2014.  Has Auburn moved ahead of schedule and is Auburn ‘back’?

In some ways Texas A&M was the perfect opponent for this Auburn team.  While they were highly ranked, they were overconfident against Auburn.  They were very vulnerable against the run and they had poor special teams.    (The only other top 10 team that fits most of this profile is Baylor.)

But A&M is a legitimately dangerous team with a lot of talent on it.  In its most recent ranking of future NFL draft prospects, CNN/SI had four Texas A&M offensive players in the top 40 overall.  Johnny Manziel and Mike Evans may be the best players at their position in the whole country.

How far can this Auburn team go this season? How high can it fly?  Could Auburn win the rest of its games and win the SEC Championship Game?  Yes, it could.  The Arkansas road game is still dangerous but does not seem as daunting now.  And UGA is a shell of the team it was before the season started.  And the game against Alabama is in Jordan-Hare…

But no matter what happens this season or what the final record of this team turns out to be, the 2013 Auburn Tigers have already won a spot in the heart of their fans  and will forever be remembered.  They are the team that emerged from the bottom of the heap in college football and brought Auburn back to the top.  The days of beat-downs at the hands of SEC powers are over.  Auburn is back.

Thoughts on the Texas A&M game:

– Auburn came into this game prepared to win.  The coaches had a solid game plan and the team was calm and focused in a very loud stadium against an explosive team.  When Auburn went into big road games in 2011 or 2012 did you feel the team was well prepared? No?  Those days are over.  This team knows that the coaches have prepared them well and will put them in position to win and therefore the players feel that they can give everything they have.

–  Auburn won this game the old fashioned way – on both the offensive and defensive line.   The Auburn offensive line has come together and is now the most underrated group in America.   They don’t give up sacks and they are incredibly productive in running the ball.   And they don’t commit many penalties either.  They are simply a well-coached, talented unit. Some of the improvement in the offensive line is natural maturation and greater experience of playing together and some of it is excellent coaching at that position.

– Tre Mason needs to be the All-SEC running back.   His performance against Texas A&M was one of the single best games an Auburn running back has had in years.  He finishes every run moving forward and getting an extra yard or two.  His run on fourth down was an impressive display of balance and drive.

– Much has been made about the “if Manziel had been healthy the game would have been different” angle.  But he was hurt for a reason – the only way Texas A&M could stay in the game was to have him run the ball more.  And in doing so he took a beating from the Auburn defense.  Therefore he got hurt and missed some time in the game.  If he had not run so many quarterbacks draws in the second half then Texas A&M might not have been ahead in the 4th quarter to begin with.

In discussing this victory on our podcast this week we believe that there are two historical parallels.  The first is the 2007 win over Florida in Gainesville:

Auburn was unranked and Florida was fourth in the country.   While this game is most memorable for Wes Byrum’s “in your face Gator chomp,” if you watch the highlights you’ll see great shots of Will Muschamp as the Auburn defensive coordinator going bananas on the sideline.

The other historical parallel was the 1994 win over Florida in Gainesville.  This game was also a shootout win over a highly ranked opponent in a game that most of the country gave Auburn no chance to win.  And with 36 seconds to go Auburn was losing—but the Tigers had the ball the ball on the Florida 9 yard line…and the rest is history: 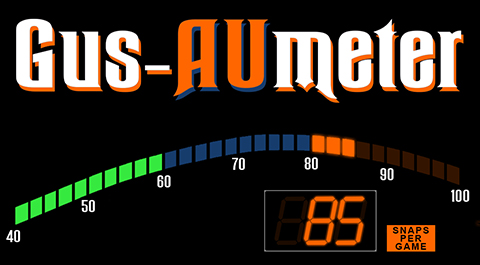 If Auburn were playing an SEC team this week we would be concerned about the potential hangover effect that a huge win like Texas A&M can have.  While Florida Atlantic isn’t nearly as bad as Western Carolina, they aren’t particularly good either.  This team is comparable to Kentucky, UAB or Akron in terms of its overall danger.  If Auburn played one of those teams and turned the ball over a lot and did not focus on defense the game could be close.

This may come as a shock, but Auburn will see a better defense this weekend than it did last weekend.  While the Owls are not good on offense, they are not awful on defense.  Having said that, Miami rushed for over 300 yards against this team and we expect Auburn to do the same.

Since the two road games are on the horizon, this is another non-conference weekend to rest any injured players and get them back to 100% before Auburn heads to the Pulled Pork Palace in Fayetteville next week.

We expect to see a healthy dose of Jeremy Johnson again this week, especially after Auburn (presumably) pulls way ahead.

Missouri  (Look, even the Missouri coaches didn’t expect this to happen so you are allowed to be shocked.)

Texas A&M  (Will that terrible defense come back to bite them this week?)

Ole Miss  (Hugh Freeze last week:  “Gus? This is Hugh. I’ll tell you everything I learned from playing A&M if you do the same for us against LSU.  Ok, get a pencil. Oh, and pass the napkins—my Peanut Buster Parfait is melting.”)

LSU (Les – you have three weeks to get this team together before you play Alabama.)

Florida  (We thought Florida’s defense could slow down Mizzou.  We were so wrong.  We do enjoy watching opposing fans do the Gator chomp at them, though.)

Tennessee  (Improving each week.  Now they get Nama.)

Vanderbilt (Congratulations to James Franklin and that win over UGA will look very impressive on his resume when he is talking to Southern Cal and Texas in a few weeks.)

UGA  (They can still make it to the national title game if everyone ahead of them loses 4 times!)

MSU  (The SEC West is brutal and this group might be fine on one side of the Big 10, but in the SEC they are just happy to be ahead of the Hawgs.)

Arkansas (Having lost five games in a row and gotten destroyed in the last two, this team is knocking on the door of the group below.)