I’m sure there are other photos of the exterior of The Auburn Stadium around. I just don’t think I’ve seen one. But there it is, at least the west side. Looks like the letters are in that Toomer’s Drugs font (they’re expecting a visit from everyone of you). Pretty interesting.

Even more interesting? THAT STAT IN THE CAPTION. 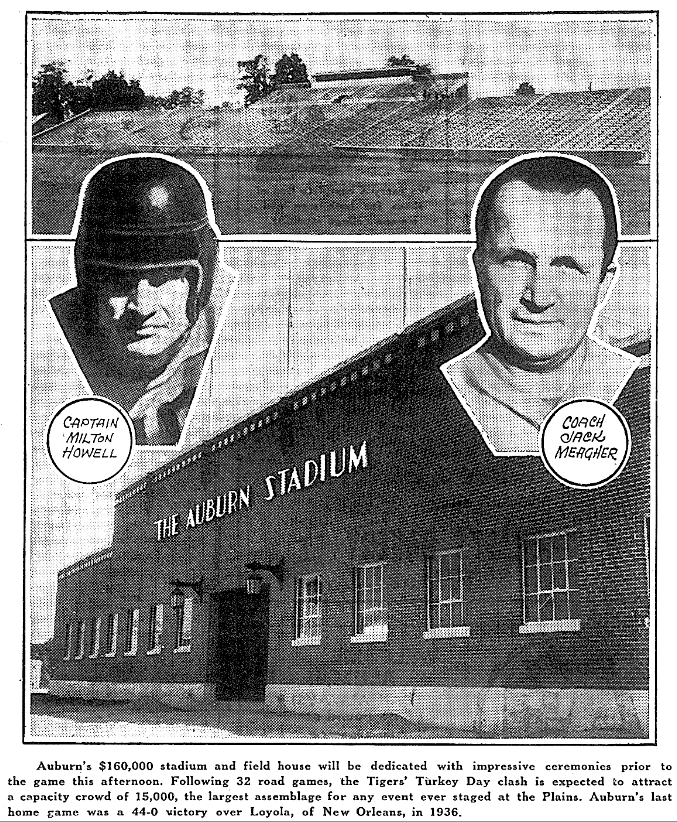 Again, this may be some call-in show trivia standard I just never internalized or came to terms with it and blocked out… BUT 32 ROAD GAMES IN A ROW?

Yep, that’s what 15,000 Auburn Stadium, which first opened for business for Auburn’s 1939 homecoming game against Florida, got for us: OUR FIRST HOME GAME IN THREE YEARS.

(Ol’ Jack Meagher may have forced us to wear green jerseys for two years to satisfy some sick obeisance to Notre Dame, but at least he helped bring Auburn football back to Auburn.)

The man who thankfully—it kept us from losing—scored Auburn’s first (varsity) touchdown up in that thing? Babe McGehee. Here’s a letter his friend wrote to him congratulating him on the accomplishment. It’s kind of awesome.

We’re documenting the evolution of homecoming at Auburn for the rest of this week. Like, nonstop vintage homecoming action. I’m excited. Go here.