Well, we should all be so lucky. An hour or day or however long he needed to rest a spell spent in that sort of special, personal service of Coach Dye is a special joy few of us will ever know. Congrats to you, Aubie. And thank you. And props, so many props, on flashing the Number One finger while you were down there. Was that improvised, thrown up on “cheese”? Genius.

But the biggest props of all to whoever conceived this photo shoot—we’re going to take Aubie out to Pat Dye’s Japanese maple farm and just have Dye sit on him—for one of the month’s in the 2012 Aubie calendar, the glorious results of which we’ve somehow missed out on for over a year. 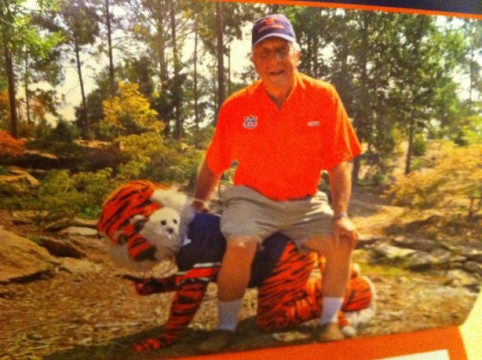 Despite how awesome this is—and it is AUsome—it’s still not the best photo shot for an Aubie calendar (though I suppose it’s conceptually similar), or even the most AUkward.

Related: Watch Pat Dye lick sugar off of a football.