A super-neat, super-exact, super-detailed drawing—they used lasers—of the Toomer’s Oaks and everything else you think of when you think of the main entrance to Auburn’s campus at Toomer’s Corner will join the Library of Congress’ permanent collection, according to the Auburn Plainsman.

The masterpiece, an integrated design and construction project completed by 2013 Auburn architecture grads Ivan Vanchev and Doug Bacon earlier this year, received Honorable Mention in the 2013 Leicester B. Holland Prize competition, which is good enough for $500 and a spot under the same roof as the Declaration of Independence and a photo of Gene Chizik, at least in Vanchev’s and Bacon’s case. 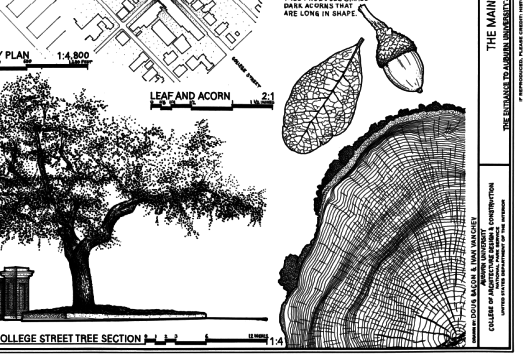 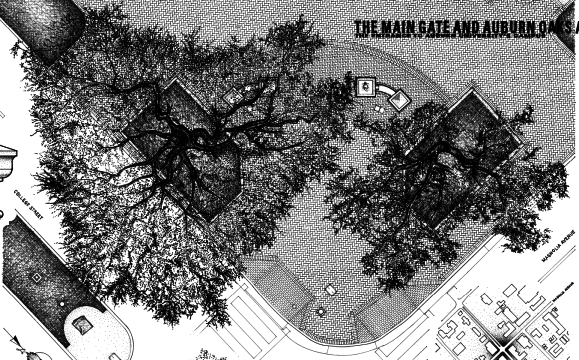 “The Holland Prize is just one sheet where you try to synthesize what is the most important aspects of a site and put it onto one sheet,” Robert Arzola, the contest’s manager, told the Plainsman. “They actually also contributed a historical report, and the drawing also has text on it where they wrote about the tradition and that the trees were poisoned. That’s partially what makes the site so significant, is the fact that this great historic site was ruined, but it was captured and entered into our collection.”

Speaking of super-detailed renderings of the Toomer’s Oaks, Auburn Art actually created a replica, drunk driver scars and all. And squirrels. And don’t forget the giant Toomer’s Oaks back tattoo. We haven’t.

To read more about Vanchev and Bacon’s drawing, “The Main Gate and Auburn Oaks at Toomer’s Corner,” check out this week’s print version of the Plainsman.

To read most everything TWER has ever posted on Toomer’s Corner—and there is so, so much—go here.