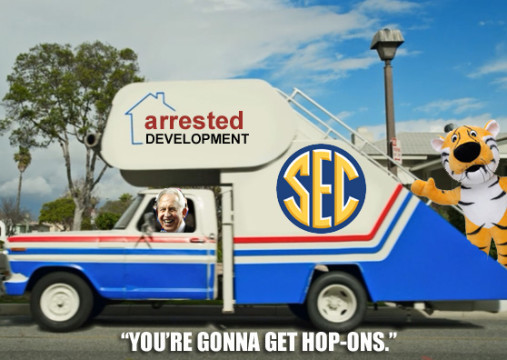 Now the story of a powerful football conference that won every championship in sight–and the one team from the Plains that had no choice but to try to beat all their brains in every year. It’s the SEC East’s Arrested Development. 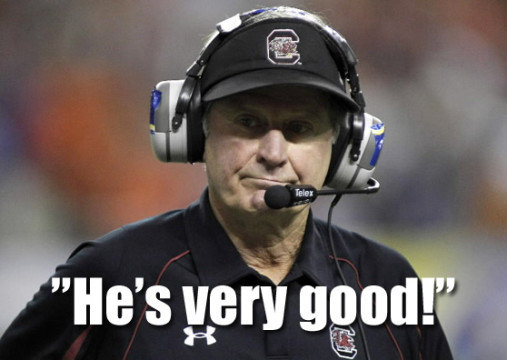 Coach:  The Crusty Elder Statesman Who Once Threw Visors.  (Anyone else notice Spurrier quit throwing his visor about the time his offense quit emphasizing throwing passes?)

Mascot makes us think of:  Honey mustard dipping sauce.  Every other mascot basically tastes like this mascot.

Returning Starters:  7 on offense, 5 on defense.

Strength of schedule: 14th toughest in the nation according to Phil Steele.  Road games are at UGA, at Central Florida, at Arkansas, at Tennessee, and at Missouri.  (Who scheduled South Carolina to play AT Central Florida?)  They avoid playing Alabama, LSU and Texas A&M.  (Who made up their schedule–Mark Richt?!)  They take on North Carolina, UCF, Coastal Carolina and Clemson out of conference. (Can they play in the ACC Championship game if they fail to make the SEC one?)

Questions: With the scheduling bypassing the toughest teams in the West, is this the year USC can return to Atlanta?  Will Jadeveon Clowney disintegrate any offensive players this season, or at least rip a hole in the space-time continuum?

Arrested Development Character: South Carolina is Barry Zuckercorn.  For the longest time, everyone looked at Barry and wondered, “How did this person end up with the rest of the family? More importantly, why is he still here?”  Sometimes the only effective solution is, “Take to the seas!”  But as for their coach, we all know “He’s very good.”

Best case scenario:  Avoiding the tough teams in the West allows Spurrier and company to slip into the SEC Championship Game even if they lose one along the way.  And who is 3-1 all-time against Nick Saban if they meet in Atlanta?  Spurrier.

Van and John think:  The most complete team in the East takes Spurrier back to Atlanta. 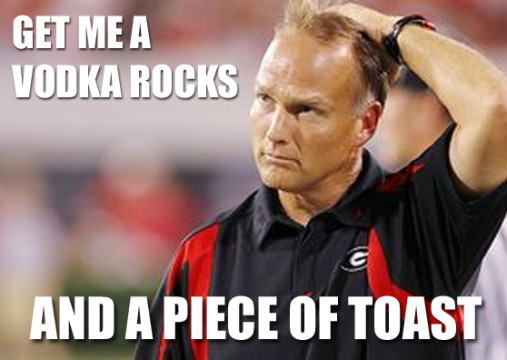 Coach:  He almost won something.  Again.

Mascot makes us think of:  What does it say that UGA has had 9 mascots but only 6 coaches since 1956?

Returning Starters:  9 on offense,  3 on defense.

Strength of schedule: 23rd toughest in the nation according to Phil Steele.  Road games are at Clemson, at Tennessee, at Vandy, at Auburn, and at Georgia Tech.   They avoid playing Alabama and Texas A&M.  They take on Clemson, North Texas, Appalachian State and Georgia Tech out of conference. (When was the last time an SEC team played two non-conference road games??)

Questions: Can UGA survive the start of the schedule (at Clemson, home against South Carolina) with an inexperienced defense? Will every game be a shootout?  Can we stand any more “Mark Richt has lost control of” references??

Arrested Development Character: Lucille Bluth is Georgia.  The aging grande dame who expects finer things than she’s actually entitled to.  Obviously Lucille has lost control of this family and should just sit on the balcony and sip vodka all day.  (D’oh!! We did it again!)

Best case scenario:  Wins the SEC Championship with the best offense in the nation and a defense that is just good enough.

Worst case scenario:  The defense can’t hold up and bunches of games turn into shootouts. 8-4.

Van and John think:  An excellent offense is not enough to win this conference (unless you have Cam Newton).  UGA missed their shot last year. 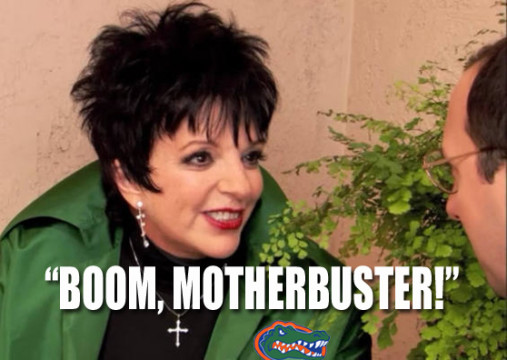 Coach:  Has he moved past “angry whiteboard breaker” to “anger channeled into high-energy creativity” head coach?  Or will he just yell and wave his arms a lot?

Returning Starters:   6 on offense,  4 on defense.

Strength of schedule: The #1 toughest in the nation according to Phil Steele.  BOOM!  Road games are at Miami, Kentucky, LSU, Mizzou and South Carolina.  They avoid playing Alabama and Texas A&M.  They take on Miami, Toledo, Georgia Southern and FSU out of conference.  Remarkable to have the #1 most difficult schedule even without facing the Tide and the Aggies.

Questions: The Gator offense was awful last year, even before it lost productive players– and the defense lost a ton of talent to the NFL.   Combine that with a very tough schedule and what happens?

Best case scenario:  The defense is solid and the offense improves.  10-2 and competing for the Eastern Division title.

Worst case scenario:  The offense remains weak and the defense is weaker than last year (or at least starts the season that way) due to inexperienced talent.  7-5.

Van and John think:  The UF defense lost its best players and the passing offense was AWFUL last year. (Yes, Scot Loeffler–it was worse than Auburn’s passing offense!)  We are skeptical the Gators can win as many games playing ugly as they did in 2012. 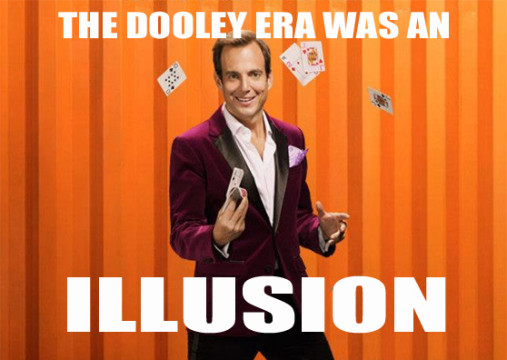 Coach:  Can you pick him out of this lineup? 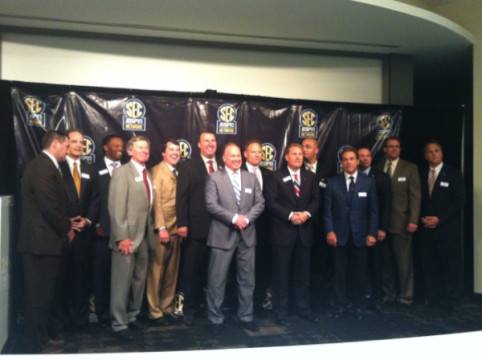 Mascot makes us think of:  Drinking moonshine and howling at the moon with Uncle Daddy.

Returning Starters:   5 on offense,  8 on defense.

Strength of schedule: 19th toughest in the nation according to Phil Steele.  Road games are at Oregon, Florida, Alabama, Missouri and Kentucky.   They avoid playing LSU and Texas A&M.  They take on Austin Peay, Western Kentucky (Petrino alert!), Oregon and South Alabama out of conference. (They have an off-week and South Alabama in the middle, but check out this mid-season meat grinder: At Oregon, at Florida, Georgia, South Carolina, at Alabama.  Ouch.)

Questions: The Vols have an excellent offensive line, but who makes plays with the ball in the 4th quarter of an SEC road game?  Will the brutal schedule crush any forward momentum the new coaching staff has made?

Arrested Development Character: GOB is Tennessee.  Never as prestigious (in certain circles) as his (in-state) brother, but keeps throwing his weight around; no one cares.  Career has suffered a few unfortunate setbacks of late.  “Winning football games is something a coach does for money, Michael.  I do ILLUSIONS!”

Best case scenario: The new staff molds the defense into a top 20 unit while the offensive line grinds out a few wins.  8-4

Van and John think:  The Vols could be the team in the East that jumps up and wins 4th place in the East over Vandy and Mizzou.  But probably not.  (Note for Auburn fans: When November rolls around, both UT and AU will possibly be searching for that “one more win” to become bowl-eligible or to improve the bowl they’ll end up in. The AU-UT game could be unexpectedly meaningful–and a “must win”–for both programs.  And it’s rarely been played this late in the year.) 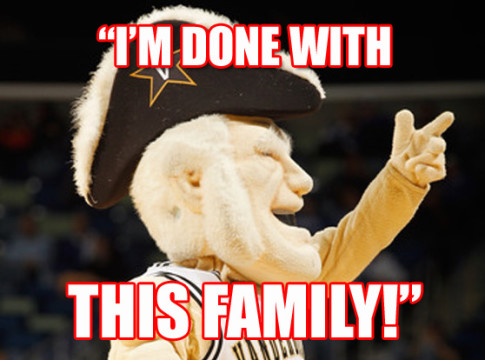 Coach:  Your 2014 Texas Longhorns are coached by…!

Mascot makes us think of:  Grey Poupon and naval engagements of yore.  “By gar, man! Slip the mains’l through the mizzenmast and batten down the hatches! Arrrr!”

Returning Starters:   7 on offense,  6 on defense.

Strength of schedule: 39th toughest in the nation according to Phil Steele.  Road games are at South Carolina, at UMass., at Texas A&M, at Florida and at Tennessee.  (Who scheduled a game at Massachusetts?)  They avoid playing Alabama and LSU.  They take on Austin Peay, U Mass., UAB, and Wake Forest out of conference.

Questions: Who replaces the production of Zack Stacey at running back? Can new quarterback and Wyoming transfer Austyn Carta-Samuels play at a high level against SEC defenses?

Arrested Development Character: Michael Bluth is Vanderbilt.  Believes deep inside he’s fundamentally better than the rest of this crowd, yet can’t ever seem to rise above them.  “I’m done with this family!”

Best case scenario: The improvement continues and the Commodores win 10 games and shock the SEC.  10-2

Worst case scenario:  Vandy slips back while the rest of the lower tier in the East improves.  The replacements at quarterback and running back are not as good as the players they replaced.  6-6

Van and John think:  A solid, talented team that has benefited from being in the easier SEC division the last few years.  They could be better than last year and not win as many games due to their schedule.   7-5. 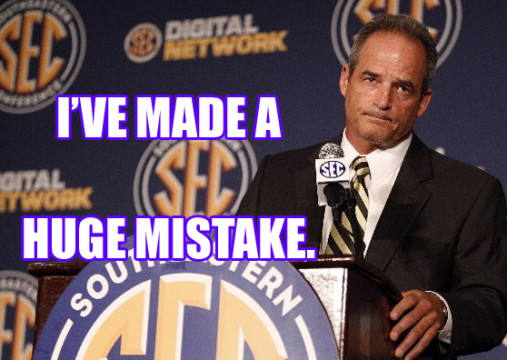 Mascot makes us think of:  Assume the fetal position! 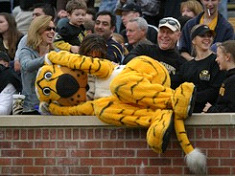 Returning Starters:  8 on offense, 6 on defense.

Offense loses:  Passing Yards: 0%; Rushing Yards: 63%; Receptions: 39.9%  (the rushing number is very deceptive since their best running back missed the whole season with an injury but will return this year).

Strength of schedule: 11th toughest in the nation according to Phil Steele.  (Yikes!)  Road games are at Indiana, Vandy, UGA, UK and Ole Miss.   They avoid playing Alabama and LSU. (Whew!)  They take on Murray State, Indiana, Toledo and Arkansas State out of conference; the latter could be a very interesting game, but this is hardly a murderer’s row non-conference schedule for a team that wants to be taken seriously in the SEC.

Questions: Was last year what we can expect more often than not from the Zou, or did injuries and the shift to a new conference derail the season?  Will Auburn ever play up there so Van can have a short drive to a game??

Arrested Development Character: George-Michael Bluth is Missouri.  Clearly thought he was meant for “better things” (looking at you, B1G), and now gazes in slack-jawed, wide-eyed shock at the group he finds he’s gotten involved with.

But the SEC should have expected Mizzou to wind up on board.  “You’re gonna get hop-ons.”

Best case scenario: The return of injured running back Henry Josey might spark an offense that will redeem itself this season.  8-4

Van and John think:  The team could be better than last year, but the record might not show it against this schedule. 5-7 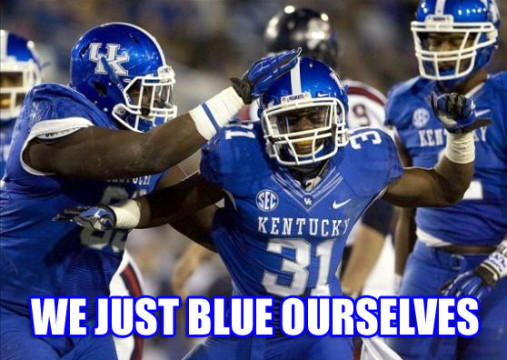 Coach:  The other Stoops brother. No, not that one.  The other one.  Yeah, him.  (They’re the Baldwins of football.  We just need an “Adam Baldwin” Stoops that isn’t related to the others but everyone thinks he is and he gets jobs anyway.)

Mascot makes us think of:  A bad Goldie Hawn movie.

Returning Starters:   7 on offense,  7 on defense.

Strength of schedule: 9th toughest in the nation according to Phil Steele.  Road games are at South Carolina, at MSU, at Vandy and at UGA.  They avoid playing LSU and Texas A&M.  They take on Western Kentucky (Petrino alert!), Miami (OH), Louisville, and Alabama State out of conference.

Questions: Can the new coaching stuff undo the damage of the last couple of seasons? Can the new “air raid” offense work with the (lack of) talent on the roster?

Arrested Development Character: Tobias is Kentucky.  Tobias is straight, but he always seems to say things that make him sound as if he isn’t.  Kentucky fans do like football, but when they talk it always seems to come out sounding like that other sport.  (On grass!)

Best case scenario:  Not the worst team in the East!  5-7

Worst case scenario:  The worst team in the East! 3-9

Van and John think:  This will be a more entertaining UK team, but we aren’t sure how much better they will be. 4-8