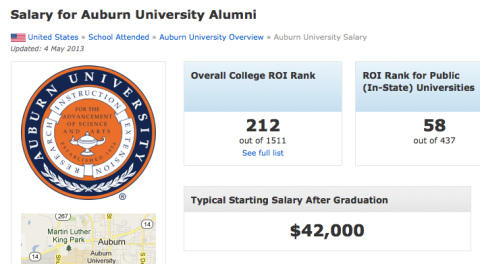 Sure, Alabama claims more championships and fans. Scarbinsky may delight in the number of seats in Bryant-Denny Stadium. Houndstooth is probably still the biggest export in terms of in-state imports. (We haven’t checked lately.) Finebaum may have more Alabama callers. But even if they were on his payroll they don’t seem to help the numbers here. Auburn is the highest ranked school in the state according to Payscale.com based on Return of Investment.

Our exhaustive research of their chart, which took at least two minutes, shows AU is fourth in the SEC behind Texas A&M, Vandy and Florida and one of the top 100 public institution values in the country.

Here are the individual breakouts for Auburn and Alabama. Some of the data can be compared head-to-head if you like. Frustratingly that isn’t the case for everything. But Auburn’s overall ranking? 212 out of 1,511. Bama’s? 327.

And the out-of-state statistics make an even more compelling argument, at least in this data; Auburn’s out-of-state students get a better ROI than Bama’s in-staters.

If you’re interested in how these numbers came to be, you can check out the methodology. The most immediately glaring issue seems to be that this is compiled via Payscale users. If you haven’t done this survey, you aren’t included. Spent extra time in grad school? You’re not here in the aggregate, either. So this survey isn’t comprehensive or perfect, and that’ll be the next thing you hear about, we’re sure.

The top spot belongs to California’s Harvey Mudd College, named after mining magnate Harvey Seeley Mudd, not to be confused with Star Trek’s Harcourt Fenton Mudd. The two don’t even seem to be related.

From this exercise we’ve also learned that there is a Madonna University, which ranks at 907. Life is a mystery.