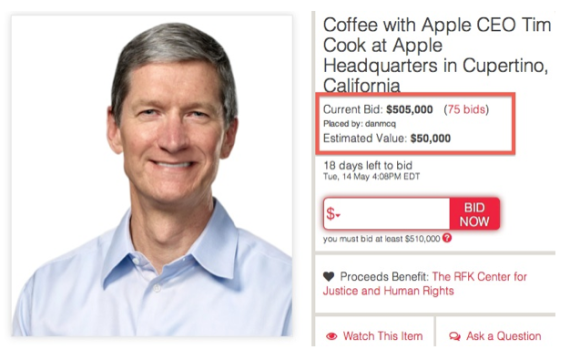 I texted Apple CEO and Glom picture day devotee Tim Cook a couple of days ago for a Toomer’s Oaks quote. He didn’t get back with me. I totally understand. That would have taken a couple of minute and the going rate for his time is currently half a million dollars for half an hour.

With a flurry of activity today, bidding on the charity auction for a coffee meeting with Tim Cook at Apple’s headquarters has passed $500,000, nearly doubling the previous record for a CharityBuzz “experience” auction set last year when a bidder paid $255,000 to spend a day with Bill Clinton.

It’s probably a bunch of LSU women going at it. We won’t know for sure for another 18 days (and God knows how many more dollars).