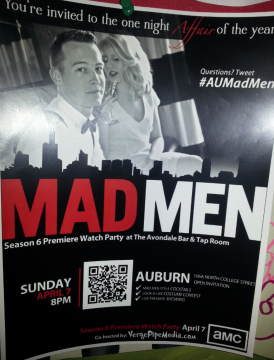 Mad Men returns to AMC for its highly anticipated (redundant?) sixth season Sunday. And we can’t think of a better way to watch the two-hour premiere than at the Mad Men premiere party hosted by Verge Pipe Media at the new Avondale Bar & Tap Room in downtown Auburn.

“Our main idea behind the Mad Men premiere party is to have an excuse to get dressed up, socialize, and have a few fancy cocktails,” said Gray Gill, an editor at Verge Pipe. “Avondale offers the perfect atmosphere for this. Even if you’re not an avid fan of the show … we encourage you to come out anyways.”

According to the event page, formal/semi-formal attire is encouraged (preferably up to Don Draper standards, obviously). The party starts at 7:30 p.m.