I had hoped to put this post together weeks ago when the Auburn baseball season was just getting started and hope filled the air, but that obviously didn’t happen. A prolonged losing streak and an oh-fer in the SEC so far has turned that hope to anguish and the idea of a baseball only post may seem less appealing to some right now.  I would argue the opposite, however.  At no time have we needed a baseball centric post more, if not to serve as some cosmic, karmic attempt to alter our seemingly doomed team’s course, then to reflect back on the days when baseball was still really good on the Plains.  Let’s hope for the former and that Bobble-head Tim Hudson can serve as an Auburn Jobu in our time of need. 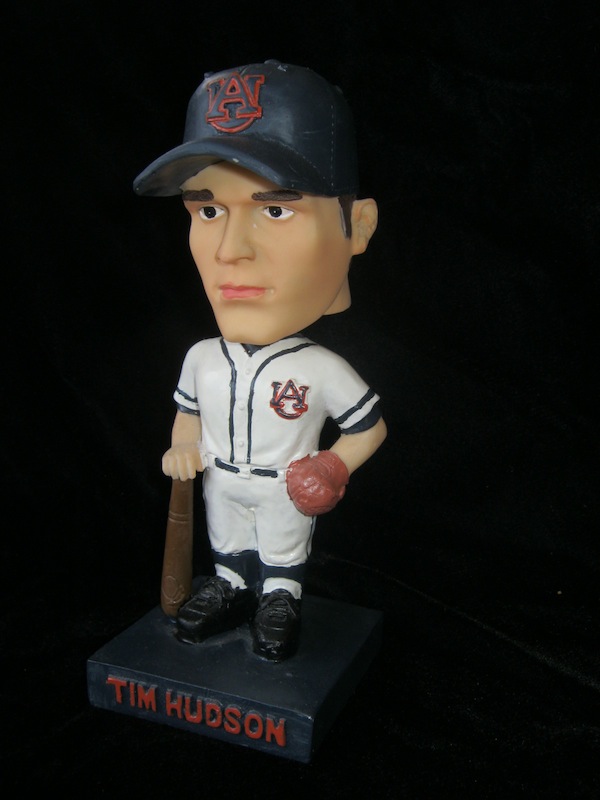 Tim Hudson was the greatest college baseball player I have ever seen.  That might sound like an exaggeration or the myth-building musings of someone who spent his first two years at Auburn watching Hudson in Orange and Blue, but it is true. I missed so many afternoon math classes in Parker Hall because the weather was too nice and the allure of the stadium too strong, and I partially blame my sub-par grades in that class on Hudson.  The time to watch him play was limited.  I had the rest of my life to learn whatever math they were teaching (probably still need to get on that).

Stats don’t tell the entire story of just how good he was, but a quick search for them lead to this paragraph from his Wikipedia bio:

“In 1997, he played all 65 games for the Tigers while both pitching and playing outfield. That season, he hit .396 with 18 home runs and 95 RBI. As a pitcher, he finished 15–2 with a 2.97 ERA to earn SEC Player of the Year and consensus All-American honors. Tim was the first player to be named First Team All-SEC at two positions (P,OF) in the same year. He was drafted by Oakland in the 6th round of the 1997 amateur draft.”

That’s ridiculous. I remember wondering which position he would play as a professional and I still have little doubt he could have made it as a hitter in the big leagues.  He clearly made the right call with the whole pitching thing, though, as he’s still dealing for the Braves and will be their opening day starter next week at the age of 37 (and has made close to $100 million in contracts).  He was never a very big guy, but he was as dominant in his sport as anyone at Auburn has ever been, including the likes of Bo Jackson and Cam Newton. 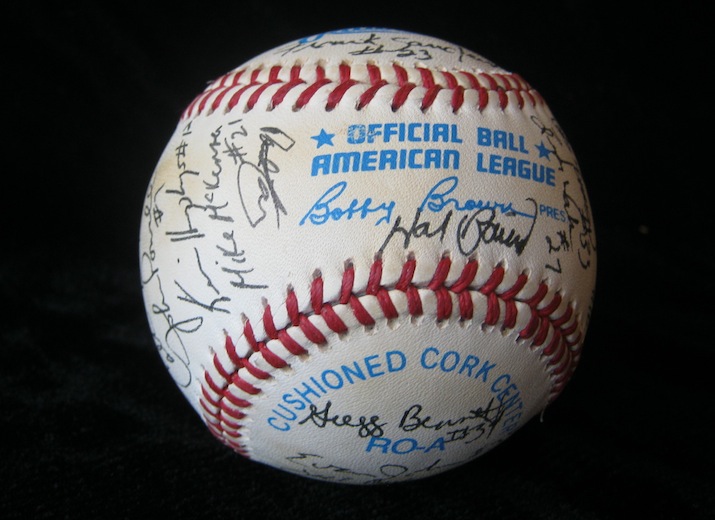 Omaha may seem a million miles from Auburn right now, but there was a time when a trip to Nebraska was a realistic annual goal.  This ball is a nice souvenir from that time. 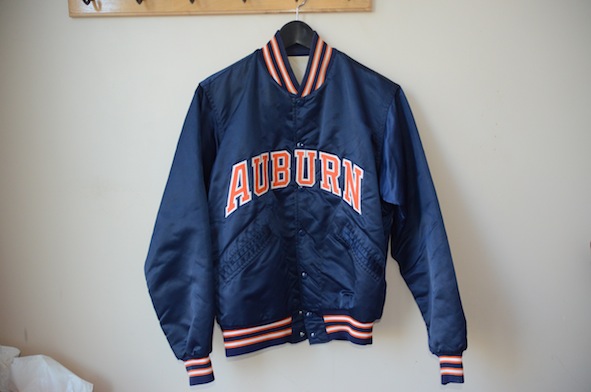 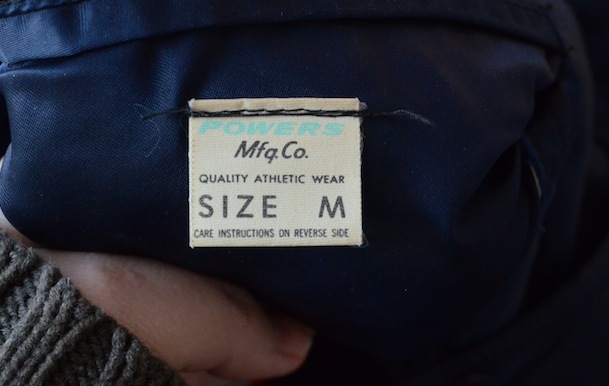 My dad owned this Powers Mfg. Auburn baseball jacket since in the early 80s. I believe he bought it at a basketball game from the Beard Eves store, but I might be misremembering. He only wore it during basketball season – usually to home games and the SEC tournament, so when he gave it to me sometime around 1993, it looked practically brand new. I’ve probably worn it hundreds of times more than he ever did, but it’s still in pretty good shape. I’ve had to re-sew the shoulder seams, and areas of the fabric are pulling a bit, but I still get compliments when I wear it. I just hope it lasts long enough to pass it down to one of my sons someday.

When I was a kid I always wanted one of the satin Starter jackets in this style like the MLB teams wore in the dugout during cold games.  In middle school my parents let me choose one from a Champs Sports catalogue for my birthday.  For some reason, as I thumbed through the glossy pages of super shiny jackets, I ventured away from the baseball teams and ended up on a Phoenix Suns purple satin jacket with bright orange trim (this was pre-Barkley, mind you, but they did have Tom Chambers and Kevin Johnson).  When it finally came in I was too embarrassed to wear it to school.  The glossy purple just didn’t look the same in real life.  I was too ashamed to tell my parents, though, so I’d wear it out of the house and then stuff it in my backpack.  A major waste of their hard earned money.  It did make me a Suns fan though, which led to me being a huge Barkley fan, which ties it back to Auburn and somewhat justifies my long personal tangent here.  Anyway, this Auburn jacket is not specifically baseball, but that’s how I associate this style.  I love everything about it and would wear it today with no shame at all. 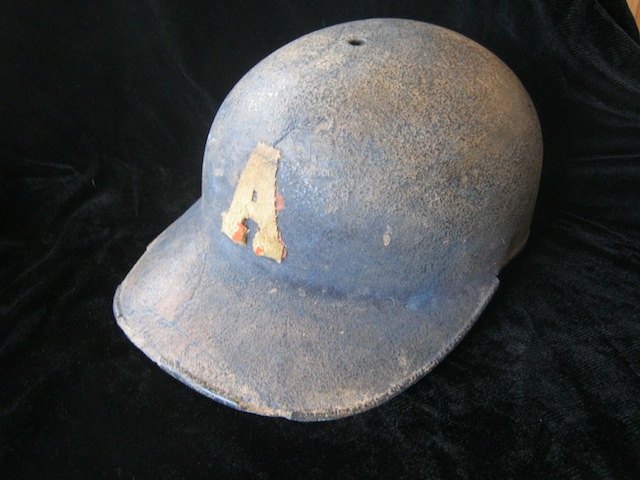 It sure looks like one to me. Either way it’s close enough and looks like it has seen some years and some action. 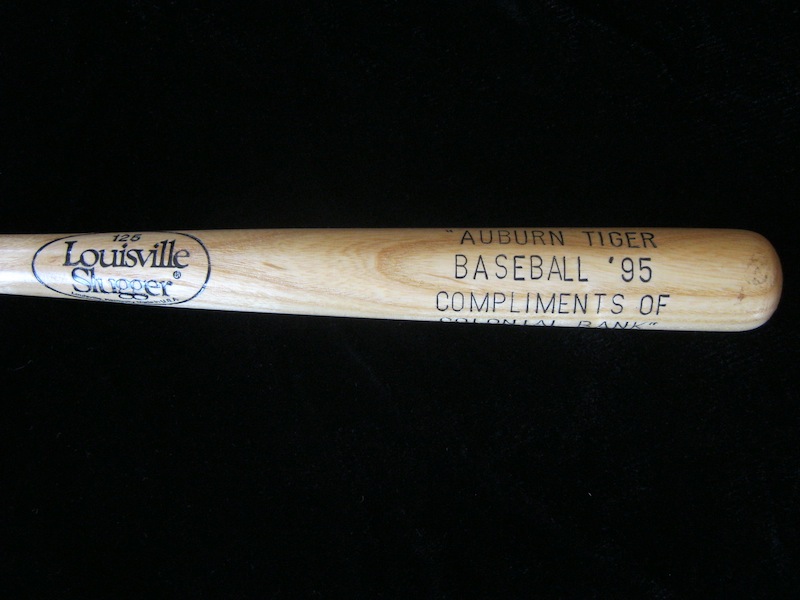 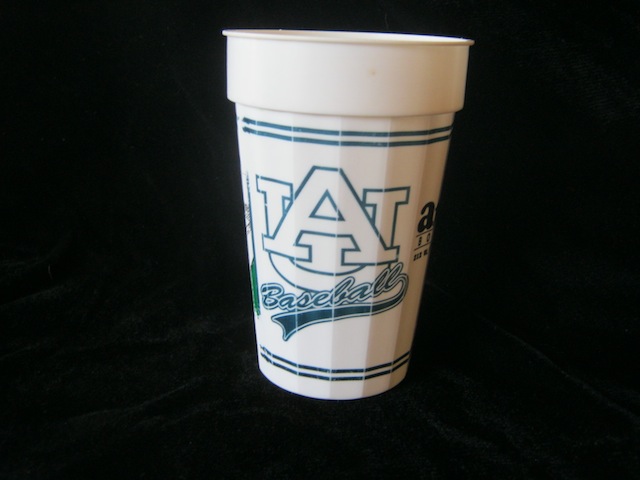 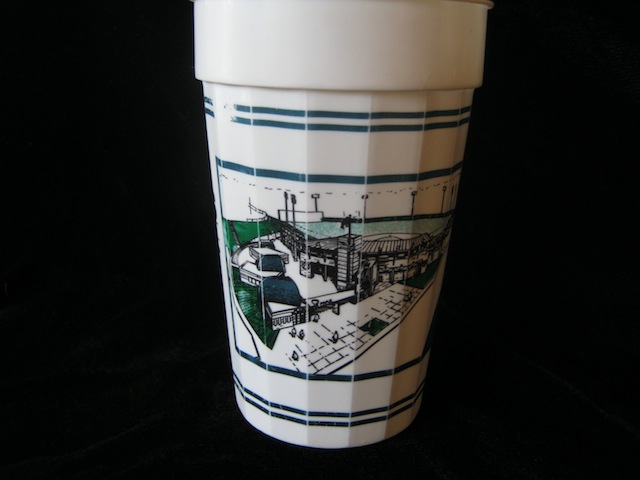 “Note the architectural rendering of what was planned to be the “new” baseball stadium on one side of the cup.”

This is a very cool look at the then preview of our still great baseball stadium, and it also serves as a great reminder that even when times are tough on the field, Plainsman Park is still a great place to catch a game and support the Tigers.  And if the losing ways continue, just slip something a little stronger in there to help ease the pain.

That’ll do it for this edition. A very sincere and heartfelt thanks to Scott for providing so much good stuff for me to use after I lamented the lack of baseball goods in Relics past.  And a hearty thank you as always to our loyal contributor and Relics HOFer @lulupuppydog.  If you have something you’d like to submit (still need something Swimming and Diving related, people), send it to me at [email protected].

P.S. A special shout-out to @AUPPL, @WarmBeagle and the guys who help me follow Auburn baseball from so far away.  It’s been a thankless job of late, but I still appreciate it.