Another example of how the tradition of rolling Toomer’s Corner has evolved, even just in the past 15 years? A front page headline from the Oct. 2, 1997 issue of The Plainsman that probably would have gotten then superintendent of landscaping Charlie Crawford run out of town or forced to take sensitivity training or fired or something were it published today: “Toomer’s cleanup crew wants tradition to wither.”

If Charlie Crawford has his way, one of Auburn’s most famous traditions may soon find itself ‘pruned.’

Cleaning up Toomer’s corner after a big game is getting too expensive and timely said Charlie Crawford, superintendent of landscaping. “If we completely clean up each time, it costs more than $1,000 and takes five to six hours,” Crawford said.

The University’s facilities doesn’t have the money or the time to clean up totally, so they just pick it up off the streets, he said.

“The paper falls out of the trees for weeks. We really could have a man down there for weeks, and it still wouldn’t be clean,” Crawford said. “It’s easy for me to be against litter,” Crawford said. “Unfortunately, it is messy and that is a contradiction to what we want the rest of the campus to look like.”

Another problem facilities is looking into is that repeated cleaning is ruining the trees on the corner.”

Ah, yes — it’s easily forgotten in the emotional countdown to the cut down, but the health of the oaks had been cause for alarm for several years before anyone had ever heard of Spike 80DF. The cover story for the Winter 2007 issue of Auburn Magazine quotes Scott Enebak, professor and director of Auburn’s School of Forestry and Wildlife Sciences, as saying that under the current stress — roll, pressure wash, repeat — of the Auburn Family’s affection, the trees may only live another five years (but that was five years ago… and he also said they could live for another hundred). 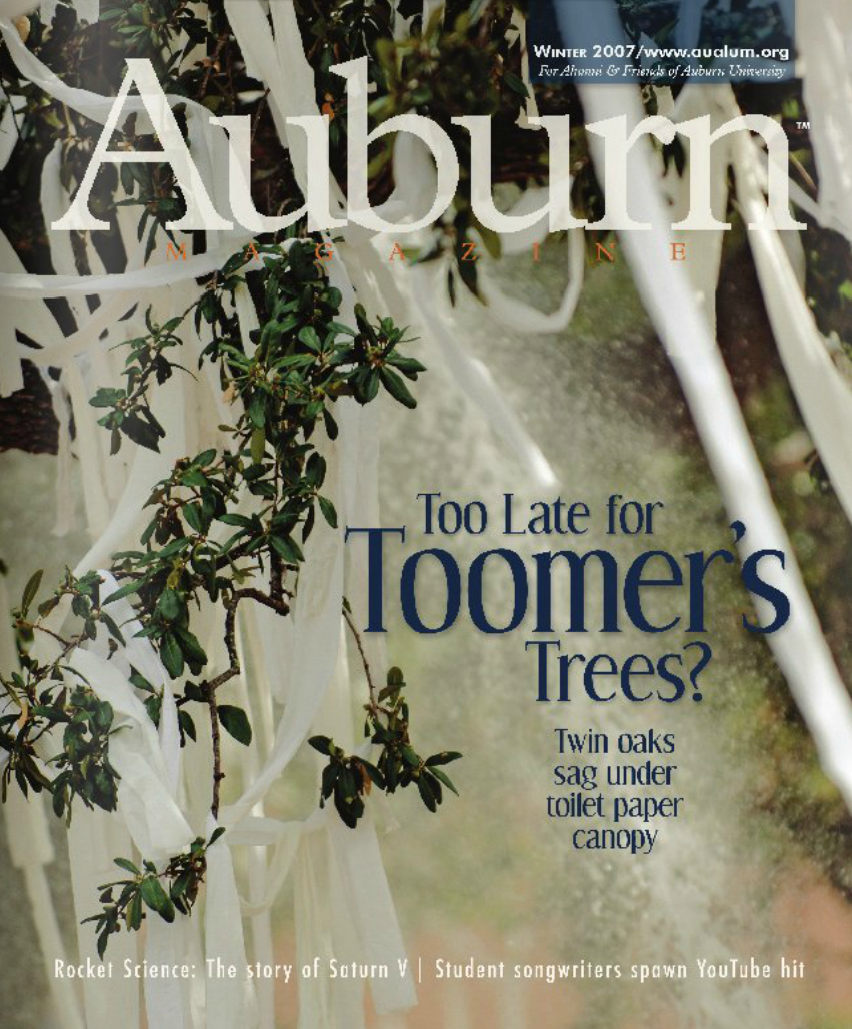 Even in the late ’90s, the Toomer’s Oaks were still the (lowercase) oaks, or even just trees, at Toomer’s Corner, noble Auburn icons in their own right but not yet imbued with their modern, almost religious significance, which Dr. Gary Keever agrees was taken to new levels with news of the oaks’ poisoning.

“It does seem that way,” Keever said in an interview last year, before court gag order restricted him and other potential witnesses in the Harvey Updyke case from speaking to media members. “It (rolling Toomer’s Corner) certainly intensified over the last decade from something that used to be reserved for away football games to now whatever might warrant a celebration.”

And once upon a time, the celebration just stayed in the branches till whenever.

“There was a period when Stan Drake was director of facilities when the toilet paper was not removed after rollings,” Keever said. “He had powerful connections, but soon as he was gone, it started back.”

“Charlie was frugal,” Keever said, “and he wasn’t a football fan.”

Irony of ironies, it was the recently retired Crawford who, after being informed of “Al From Dadeville’s” Jan. 27, 2011 call to The Paul Finebaum radio show, first alerted Keever to the oaks’ possible poisoning, thereby kick starting efforts to save the trees for the rollings he had lobbied to end 14 years earlier.

Though his efforts were obviously in vain, they weren’t exactly met with a post-Updyke level of indignation. And that’s the thing — no one in 1997, or at least no one interviewed by The Plainsman, seemed all that bothered by a university employee floating the idea of discontinuing the tradition even being up for discussion, let alone a discussion started by a university employee.  (Sixteen years later, we had to build temporary rolling structures!)

The only person who seemed to really get his dander up was Jeremiah Bride, a junior in aviation management, who said, “If they take Toomer’s Corner away from us, we’ll roll facilities.”

Auburn city officials were supportive of rolling Toomer’s, calling the tradition “good, clean fun” that generated “goodwill for the community and the university.”

According to then Auburn SGA Vice President Miles Bliss, “The value in the spirit of rolling Toomer’s Corner in that exciting mass of people celebrating overwhelms any monetary costs.”

But from the article, you almost get the sense that Crawford’s objections were more a principled stand against litter than a call for fiscal conservatism.

“If you had a party, you’d clean up afterwards wouldn’t you? Toomer’s is a party. Clean up after yourself,” he said.

“But it’s human nature, as long as someone else is cleaning it up, it’s okay. Some people like it clean, some don’t.”

The story ends with Crawford ultimately coming to terms with working for those who didn’t.