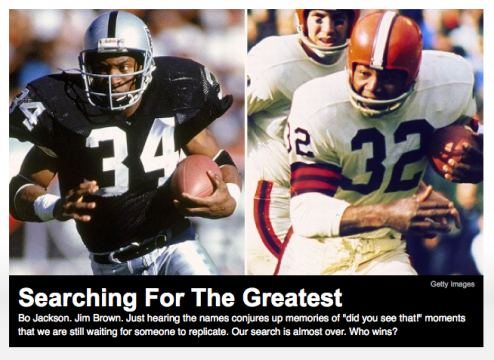 The point of ESPN’s recent, record-setting documentary about Bo Jackson was basically to investigate if he was actually a human.

So, again, if the “unique metric” their Sports Science team is using to help decide the greatest athlete of all time is in fact built on “attributes such as speed (Bo’s faster than a Smart Car), power (Bo snapped bats over his head like they were a 4-year-old’s Gatlinburg walking stick), reaction time (Bo caught six flies in his hand at one time) and more (Bo ran up walls)”—well, then it’s weird there even is a contest they feel the need to ask people to decide. Thankfully, thus far, the people have agreed, and after two weeks have voted Bo to victory over Roger Federer, Muhammad Ali, and Michael Jordan, all the way to the final “showdown:” Jim Brown.

(The Plainsman said some folks thought Bo beating Jordan was an upset—it wouldn’t have even been an upset if the question was “Who’s The Greatest Basketball Player of All Time?”)

So go here and vote your conscience. The obvious will be stated on Sunday’s episode of SportsCenter.