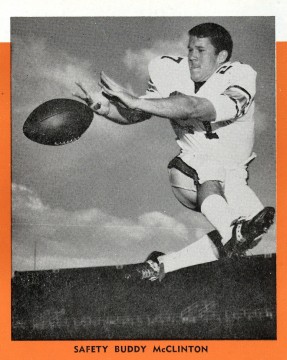 Former Auburn All-American safety Buddy McClinton is among those nominated for induction into the College Football Hall of Fame this year, Auburn announced Wednesday night in a press release.

McClinton started every game in his Auburn career. He was a first-team consensus All-American safety and was named to seven All-America teams as a senior in 1969 (but not Playboy’s—weird). The Montgomery, Ala., native earned All-SEC honors three consecutive years from 1967-69 and was named the 1968 Sun Bowl Most Valuable Player.

“I am truly blessed to be included with such an incredible group of players which includes several Heisman Trophy winners and countless Outland and Butkus Award winners,” McClinton said. “Many of these men went on to fabulous pro football careers and are in the Pro Football Hall of Fame. I am humbled and honored to be nominated for the College Football Hall of Fame by such a prestigious organization as the National Football Foundation. This is something you don’t even dream about as a college player, but, owe so much to my coaches and teammates at Auburn, especially Coach Jordan, who taught us how to me men with character and determination to be the best you could be.”

“Buddy McClinton is one of the greatest defensive players in Auburn football history, so we are certainly pleased to see him on the ballot for the prestigious College Football Hall of Fame,” said Auburn Director of Athletics Jay Jacobs. “This is a well-deserved honor for a great player and an even better man. Buddy’s name certainly belongs among the all-time greats in college football.”

To be eligible for the ballot, players must have been named a First Team All-America by a major/national selector as recognized and utilized by the NCAA for their consensus All-America teams; played their last year of intercollegiate football at least ten years prior; played within the last 50 years and cannot be currently playing professional football.