UPDATE: Another photo of Bessie.

One year, Miss Auburn was a real heifer–a prize-winning Holstein to be exact.

Running on a “Legalize Grass” platform, Bessie the Cow—the Auburn Vet School knew her as No. 18, but her real name was Amelia—not only ran but won the 1979 Miss Auburn election. It was a joke. But there were slogans (“Not Just Another Drop In The Bucket,” “Bessie—She Won’t Steer You Wrong”), there were handouts, there were posters, there were orange T-shirts. And there was national attention. 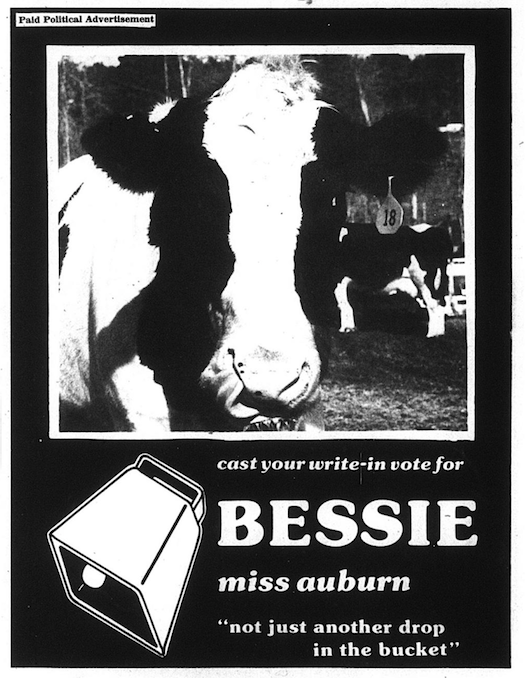 “It was kind of like the Harrisburg disaster; we didn’t expect the reaction we got,” Betsy Butgereit, who along with fellow Plainsman staffer Mike Sellers, came up with the idea over Christmas break, told The Plainsman. “Mike and I were surprised at the response. We think it was so successful because independents saw it as a way to make their votes count in what has previously been a Greek-oriented race.”

Block and Bridle, a student agricultural organization, block-voted for Bessie. A huge pro-bovine banner was strung across the front of Mag Dorm.

But Greeks also got behind Bessie, at least some of them. Phi Kappa Tau painted “BESSIE” in large letters across the front windows of the fraternity house and wound up doing the block vote thing, too. And according to the 1980 Glomerata, Bessie—who “liked Auburn because the people were so friendly and had warm hands”—was actually billed as a member of Mu Omega Omega (MOO) sorority and the captain of the the sorority intramural pasture muffing throw team, as well an active member of the SGA and a Barn House Sweetheart.

The story made papers across the country, including the front page of the Atlanta Journal. Former Plainsman editor Lauren Steele, then living in Washington D.C., apparently first heard about it on a local D.C. news broadcast. It was rumored to have been on Paul Harvey. And Good Morning America. The Atlanta Constitution congratulated Auburn for its “spunk” and creativity in an editorial after $165 of the $173 Butgereit and Co. earned from Bessie T-shirt sales was donated to an academic scholarship “in the name of Auburn spirit.” (The remaining $8 was used to purchase a bell for Bessie affixed with an engraved plate that read: “Bessie, Miss Auburn 1979-1980. A moo beginning.”)

“The papers took it as a college prank; there was no ridicule,” Butgereit said. “They were laughing with us, not at us.”

Rick Harmon, one of the 59 members of Bessie’s campaign team who that year was running unopposed for Plainsman editor, says that though the stunt could have possibly been construed as a cud ‘n’ cheek commentary on Auburn’s agricultural heritage, “it wasn’t really like, ‘let’s stick it to all the people who call us a ‘cow college,’ it was just ‘wouldn’t it be funny if a cow won Miss Auburn.'”

And she did, with a total of 2,385 votes—1,376 more (it was the greatest margin of victory ever) than Cindy Murphy, her closest competitor. They were all write-in. They were all illegal. And at least to some people—mostly members of other candidates’ campaign teams forced to fight a cow for publicity—they were an affront to the Miss Auburn process and an insult to Auburn’s image.

Butgereit thought that was udderly ridiculous.

“How can you break a campaign regulation when you’re running an illegal candidate?,” she said. “It was a joke and never intended to insult anybody.”

Save mild criticism that Bessie may have kept votes from more deserving, human candidates, Cindy Murphy, who was named the legitimate Miss Auburn after winning a run-off election by just 74 votes, was totally cool with it.

After being announced the winner she told the Plainsman: “Tell her (Bessie) I hope I can do her job for her since she really won.”

If you’d like to help TWER keep the lights on and the obsession with Auburn lore unhealthy, you totally buy some good, cheap Auburn stickers. They’re great.