Whether it was spur of the moment or seemed like just another Harlem Shake video, Tara Jones went for it, and it worked.

The new Miss Auburn said making the video, which in just five days has been viewed more than 7,000 times on The War Eagle Reader alone (it was also widely shared on Facebook), started as a last minute attempt to draw a crowd to her campaign kickoff last Wednesday afternoon.

“I think (the video) helped a lot,” Jones said. “We definitely got a lot of attention from the video. I realized it was funnier than I thought it was. I didn’t think it was that amazing, but granted, I don’t like to watch myself dance.”

However, Jones’ uninhibited, solo boogieing at the beginning of the video may have been what made the biggest impression on students.

“Blanche (Alverson—Auburn’s Miss Homecoming) is obsessed with it,” Jones said, laughing. “I ran into her on the concourse yesterday. She texted me yesterday and was like, ‘let’s go to lunch, you’re so cool.'”

“She (Jackson) wanted to meet me,” Jones said. “I told my dad and he’s like ‘I just want to meet her father.'” 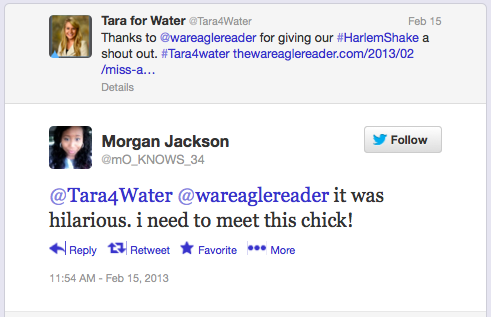 Jones said the amount of publicity she received from the video was unexpected.

“It was funny because we posted (the video) on Thursday and then Friday we posted the real campaign video. Everyone was like, ‘I love your video’ but they were all talking about the Harlem Shake video.”

With approximately only 60 people at her “Tara For Water” campaign kickoff, raising $4,000 to assist in worldwide water crisis seemed like a lofty goal, Jones said. 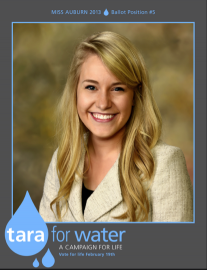 At her benefit concert Saturday night, $4,000 was already behind her.

“We celebrated last weekend like we already won the campaign. People have been more and more generous, and we never dreamed we would get this far. The Lord achieves beyond my wildest dreams.”

In one week, Tara’s campaign raised more than $7,500. She partnered with three non-profit organizations dedicated to raising money to build wells and sending water purifiers to countries without access to clean drinking water.

“Auburn students are doing something tangible for a worldwide problem that is solvable,” Jones said. “Technically, my platform was bigger than Auburn, and I guess I like that.”

And she isn’t stopping here.

“I’m not exactly sure what my specific goal for this coming year is yet, but I know that I want Auburn to be one of the leading universities in helping fight the water crisis.”

You can watch Jones’ do the Harlem Shake here.