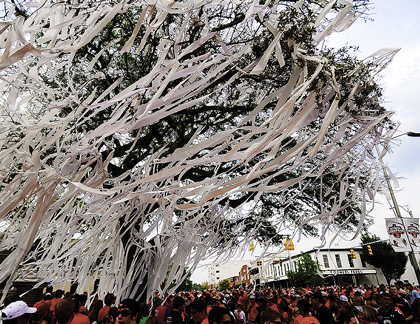 There’s going to be a “Celebrate the Tradition” block party at Toomer’s Corner on Saturday, April 20, after Auburn’s A-Day football game.

Make sure you bring a special roll.

Auburn’s Office of Marketing and Communications today announced that the event will mark Auburn fans’ final opportunity to roll the Toomer’s Oaks before the trees are removed.

“The Oaks at Toomer’s Corner have been a part of Auburn tradition for generations,” said Debbie Shaw, Auburn University vice president for alumni affairs and executive director of the Auburn Alumni Association, said in a press release. “Their removal will in no way diminish the Auburn Spirit, which has grown even stronger during these past two years.”

A date for the oaks removal has yet to be determined but according to a press release “members of the university’s Tree Preservation Committee say they do not see the possibility of survival.”

Dan King, assistant vice president for Auburn University Facilities Management, told the OA-News that the trees will likely be removed the first or second week after A-Day

And there’s more big news. The university will unveil the future landscaping plans for Toomer’s Corner on A-Day as well.

“The architects are combining their expertise and experience with the terrific input from the Auburn Family to come up with a future plan that we will all be proud of,” King said.

The university and city will create a temporary wire structure to keep the tradition alive after the oaks are gone.

“We want people to be upbeat about the future of this area,” Shaw said. “Rolling the corner is a uniquely Auburn tradition, and whether we roll trees or other structures, the camaraderie and sense of togetherness is part of what makes Auburn a special place.”