UPDATE: We have video.

The team Ryan Holderfield’s intramural basketball team was supposed to play Thursday night didn’t show up. It was probably for the best. They would have been going up against Cam Newton, who is now so thoroughly a normal Auburn student he’s no longer content to just lead cheers in the student section during regular basketball games but play pickup games with any group of guys who’ll have him.

Holderfield’s group of guys said sure. And not just to Cam –there’s another former Auburn football star returned to campus and hungry for hoops.

“A guy on my team was sitting on the bench and Kodi (Burns) walked up to him and asked if he could play with us. He said Cam will be here in a few,” says Holderfield, a senior at Auburn studying aerospace engineering. “The team we played tonight didn’t show up to play. But they played some pick up games with us.” 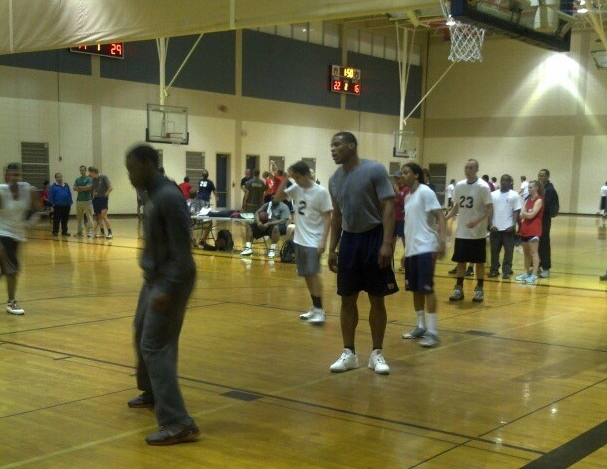 Holderfield says Newton and Burns played two pickup games with his team for more than an hour. He says Newton indicated he usually “goes home” on Thursdays — he currently has class three days a week — so tonight was likely a one time “very surreal” deal, though they’re technically both on the team roster.

“He (Newton) is very good. I think he was told not to go very hard so he wouldn’t get hurt, but he was still very good. Kodi and him both.”

Upon his return to Auburn for his degree, Bo Jackson told a reporter who asked if he’d be playing intramural sports “I think I do enough playing. The only recreation I do while I’m here is fishing, hunting and driving my jeep.”