Brent Musburgers of the world rejoice—35 days after winning the national championship game, Auburn grad Katherine Webb has achieved sex symbol immortality in the legitimizing pages of the Sports Illustrated Swimsuit Issue. And, rightly or wrongly, she’s probably lost the respect of even more Auburn fans in the process.

Judging by the cover, which was leaked Friday, we suspected the Auburn grad would loom large in the magazine’s annual review of the female form, and we were right — so large that S.I. is kicking off its new swimsuit-specific website (the actual magazine won’t hit shelves until tomorrow) with a 30-photo gallery of Webb.

Tragically, the majority of the photos feature Webb in some sort of vaguely-Tide-ish football gear, some in what seems to be a full on Bama jersey. But a few show her in some sort of Iron Bowl-hybrid. At least she’s turned completely to the Auburn side in one shot. There’s still hope. 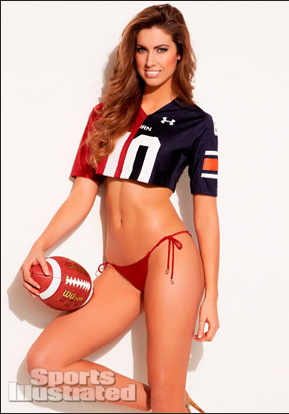 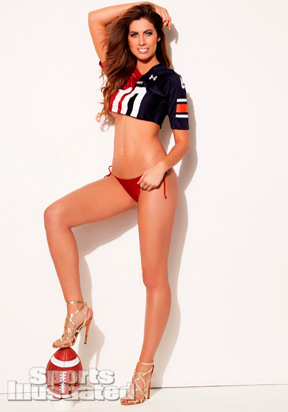 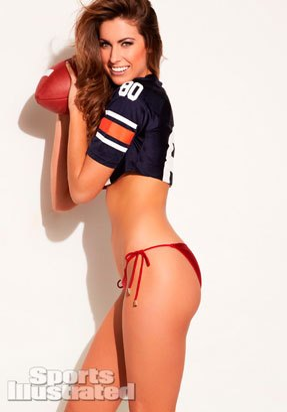 Webb will join SI Swimsuit cover girl Kate Upton on the site for “a live Hangout” hosted by the swimsuit issue’s editors on Valentine’s Day night. And here they are together during their appearance on The Late Show with David Letterman.

Webb is the second Auburn graduate to featured in the swimsuit issue in the past five years; Jessica Trainham made the cut in 2008.

* Katherine Webb’s sister is an Auburn sophomore
* One of the Wiggles is an Auburn fan
* The sexy Auburn grad student in ‘House’
* Wall Street Journal says Auburn football worth millions more than Alabama football
* Auburn professor 4th hottest in the country
* Katherine Webb in an Auburn bikini?
* Auburn students vandalize Jacks restaurant ’cause it looked too Bama
* Katherine Webb and Conan O’Brien