Unless you’re on his intramural basketball team or happen to run into him in the Auburn Arena student section, it’s pretty hard to make contact with Cam Newton Normal College Student. But not impossible.

Newton was serenaded today by a group from the Wesley Foundation hired to deliver the Blessed Individual a $10 Singing Valentines during one of his classes in Haley Center by Rachel Gilmore, a Phi Mu looking for a date to a Carnation Formal. 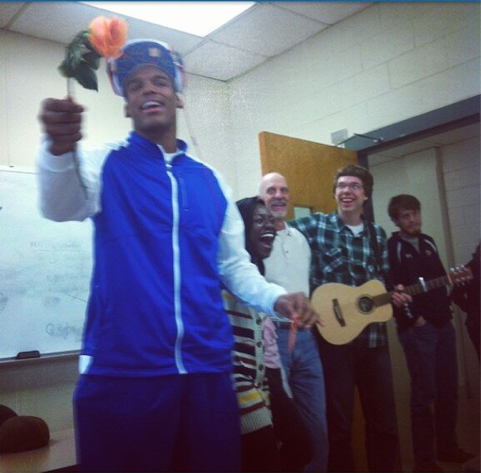 “We found Cam’s class at 12:30 then asked the teacher if it was OK,” said freshman Avery Ginn who played the guitar on the short version of “My Girl” (changed to “My Guy”).

Apparently the group had to clear it with his bodyguards, too, who were waiting for Newton just outside the door.

“They were actually kind of on the fence about it, but it went really well,” said Tomi Obebe, who handled the main vocals “shaking the whole time.”

As for Newton’s reaction, “he loved it,” Ginn said. “He was a little stunned but he got really into it.”

Did he accept the invitation?

“He looked pretty happy, so who knows?” Obebe said.

Upon learning the Valentine had been delivered, Gilmore tweeted “Now just waiting for a phone call with an answer to formal.” 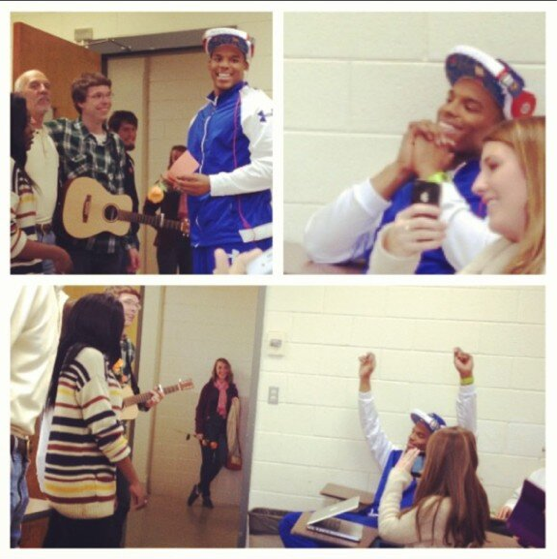 Wesley Foundation leader Patricia Stevenson said there were actually two Valentine’s were ordered for Newton, but only one was delivered.

Money raised from the singing Valentine’s will go toward the costs of the Wesley Foundation’s Spring Break mission trip to Mexico and a May trip to the Ukraine.