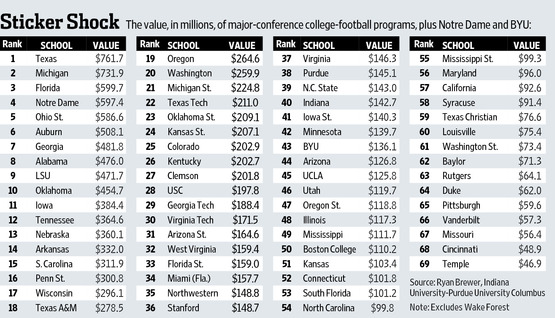 Citing a new study that calculated the “intrinsic valuations” of every football program in the top tier of the FBS, the Wall Street Journal reports that Auburn football is the 6th most valuable team in the country.

Among other factors, the study looked at each program’s revenues and expenses and made cash-flow adjustments, risk assessments and growth projections for each school. The resulting figures represent what the teams might fetch if they could be bought and sold like pro franchises. (As a point of reference, the NFL’s Jacksonville Jaguars sold in late 2011 for about $760 million.)

So what’s the asking price for the Auburn Tigers? Just over 508 million dollars. But if you’re looking for something a little cheaper, try the Crimson Tide, which was valued at a PAWWWLLLtry 476 million.