The front page of today’s Crimson White? A story about how members of Alabama’s Million Dollar Band have to bring canteens to practice to avoid dehydration and then use the bathroom at Arby’s, while members of the Auburn University Marching Band will soon be relieving themselves like kings in their own trillion dollar bandtopia. 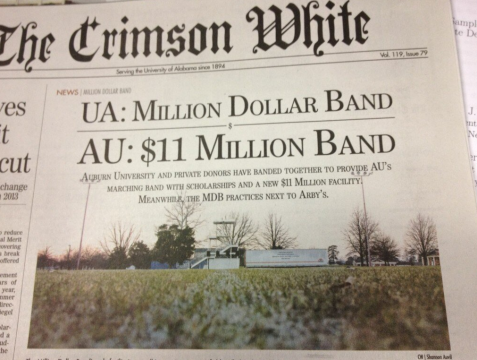 “Auburn University and private donors have banded”—nice—”together to provide AU’s Marching Band with scholarships and a new $11 million facility. Meanwhile, the MDB practice next to Arby’s.”

That might be the best thing ever written in The Crimson White, or at least the best thing spelled correctly.  At the very least it’s a refreshing change from how Auburn is typically covered.