It’s easy–and sure, totally accurate–to chalk Katherine Webb’s overnight celebrity up to the modern magic of the Internet. But comely Auburn coeds photographed in compelling contexts have been going viral for years. And in 1958, Auburn sophomore Betty Hughey, one of the Loveliest of the Plains, did it almost as instantly.

A photo of Hughey posing in a Civil War soldier’s cap and in the center of some gargantuan stars and bars was published in the Jan. 15, 1958 issue of the Plainsman on the occasion of Robert E. Lee’s upcoming 151st birthday (the Loveliest series was big on themes). The piece of Confederate cheesecake was immediately (and approvingly) gobbled up by the AP wire and appeared that week in hundreds of papers across the country (including the Gettysburg Times). 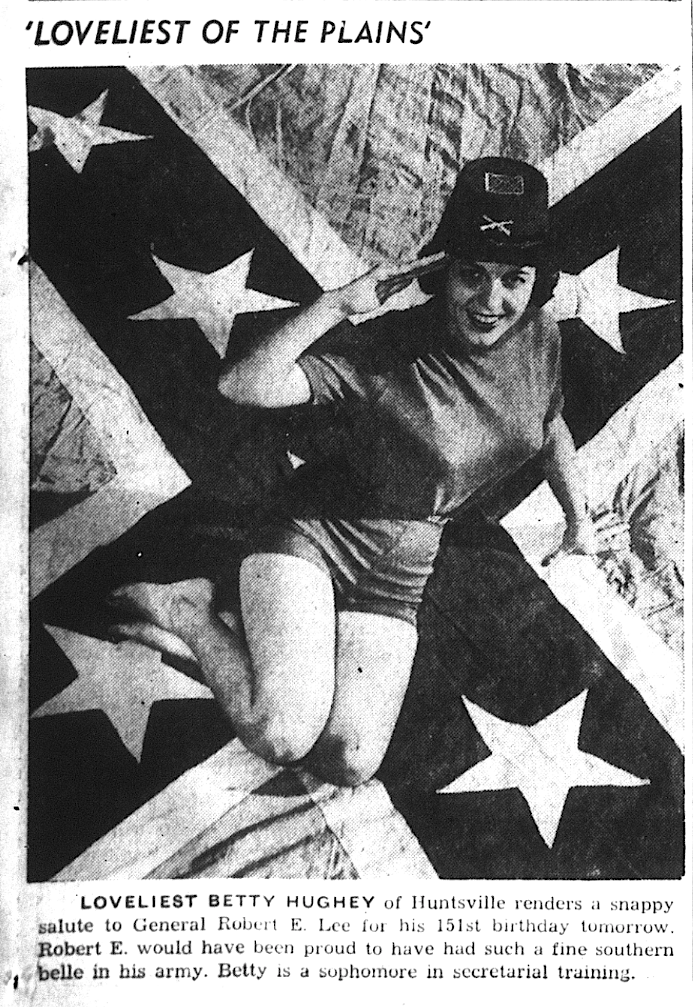 Two days later, Hughey shared equal space on the front page of the New York Daily News with none other than Jayne Mansfield. Their photos were practically the same size. Ditto, maybe, their measurements.  That same day, the Los Angeles Times ran the Confederate Coed’s photo full-sized, 8 x 10, on page three, just below a photo of Vice President Nixon.

“The amount of publicity on this picture would have cost Auburn thousands of dollars in advertising,” wrote the Plainsman. But it wasn’t just Auburn reaping the benefits of Hughey’s 15 minutes. Hughey herself was a bona fide overnight star, if but for a moment. She received tons of fan mail and even an invitation to appear at a Robert E. Lee convocation at (for some reason) Hamline University in St. Paul, Minnesota (she didn’t go).

According to the Plainsman, “the picture has received more recognition in newspapers than the fact that Auburn had the Number One Football Team in the nation.”

Eat your heart out, Daisy Duke…

You can see more, but less currently controversial Loveliests here.