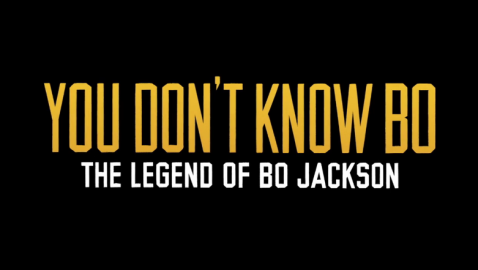 You Don’t Know Bo, the latest in ESPN’s 30 for 30 film series, isn’t a sports documentary. It’s bigger than that because Bo’s bigger than that, bigger than anything–just ask his neighbor or his high school coach or Hal Baird or Boomer Esiason or Nintendo or Nike or David Housel or Pat Dye or YouTube.  Or ask the film’s director, Michael Bonfiglio, who asked them all.

I spoke with Bonfigilio on the phone yesterday about the film. Turns out a Bo story I wrote a couple of years ago inspired some of his enthusiasm for the project. He’s not a sports guy, either. He’s a Bo guy. We got along great.

What was your opinion of Bo before you started shooting and how did it change?

It’s a funny thing, I’m not really a sports guy at all, I never have been. But obviously I was alive during that period and knew who Bo Jackson was because everybody did. But until I started researching this film, I didn’t understand why he was so extraordinary. Part of this film, what I think comes across, is my own enthusiasm for this story. Some of the excitement that is in the film is reflective of the excitement I had for some of the stuff I was learning for the first time. It was so cool to be talking to these people who were just fans and the enthusiasm that they had was completely infectious. And probably the reason they were so enthusiastic was because they were trying to get people to explain why he was so special.

Was Bo receptive to participating?

We planned on doing the film with or without Bo. We didn’t know whether or not Bo was going to participate. We didn’t know to what extent we really wanted his involvement, to be honest with you, until I got involved and came up with the concept and feel of what we were going to do. There were a million different ways we could have done this – follow Bo around over the course of six months or something. But we eventually wanted to do it the way it ended up. I’m really glad we have him. He’s a tremendous story teller.  Just having his personal perspective and personality and getting his take on things was invaluable.

So what’s your favorite piece of Bo lore?

I guess to me the run up the wall in Baltimore.  I had never seen anything like that. I don’t think anyone’s ever done that since. It’s just insane. You look and it’s like he’s doing parkour. And I could be wrong but I don’t think anyone’s ever done that since and if you think it was a remotely doable thing, someone would have tried it just to be like Bo. And I mean, the nonchalance with which he did it, like it was a normal thing to do. But I guess the thing that really blows me away the most, and I think it’s very emotional, and if you had scripted it would feel like a cliché, is hitting a home run in his first at bat after his comeback.  I mean, you choke up, because of the circumstances with his mom and everything. If this had been a fictional movie and you’d scripted it and put that in, much less any of the other stuff, people would walk out – ‘that’s ridiculous, that’s over the top.’ But it really happened.

I’d seen a bunch of the 30 for 30s and it was a little intimidating to be doing one because of the bar had been set so high. So when I started, I was like, ‘I’m going to read everything, do all the research,’ and I was initially looking for the dark underbelly of this story — ‘where’s the real conflict here?’ I was struggling here for a little trying to formulate a concept, and then I realized that’s the beauty of this story. It’s a fairy tale. It’s a super hero movie, really. Once I set out on that concept for it, it’s not a sports movie, it’s a superhero movie. And I love superhero movies. From the origin story of him throwing rocks at the pig and jumping over the ditch and kind of realizing his super powers, and going to Auburn and becoming a legend and bringing hope to Auburn, all the way through his injury and comeback, that was the part of the story that really resonated with me. It doesn’t need some dark underbelly side of it. It’s a fairy tale. I tried to embrace that concept.

Has Bo seen it? What’d he think?

He saw it the other day. He really loved it. He and his wife watched it and he gave it 5 stars. His one complaint was he said that the ditch he jumped over wasn’t 40 feet, it was only 20 feet.

You Don’t Know Bo premieres on ESPN tomorrow at 9 p.m.