How many utterances of “What the heck is going on here?” have been inspired by the legendary David Langner over the years? Who can say…  that’s just the way it goes with a guy who’s idea of college fun was hospitalizing a guy for calling him “punk,” who according to one report started every fight in the SEC in 1972, who kept both of the two holy footballs from Punt, Bama, Punt. That’s just Langner, everyone says.

And that’s probably what they were saying back in the early 70’s, too (What’s that on his head? Lordy, don’t ask, whatever you do—that’s just Langner). Because even though Paul Lukas’ recent “What in the…?” in on UniWatch.com (“The Obsessive Study of Athletic Aesthetics”) referenced a photo of Auburn’s Mike Fuller with a visor over his helmet—not a face mask shield thing, an actual sun visor—during a game against Georgia Tech, it was Langner who, from what I can tell, started the trend.

It’s one of myriad Auburn costume curiosities born between the mid 60s and mid 80s, and judging by a 1973 Plainsman comic drawn by that Jimmy Johnson, Langner was, at least at the time, with whom it was most associated, so much so that Johnson had Comic David wondering whether wearing it made him “a visor person.”

One of the comic’s captions reads: “He (Langner) is currently creating interest with his sun visor which attaches to his helmet for punt and kickoff returns.” 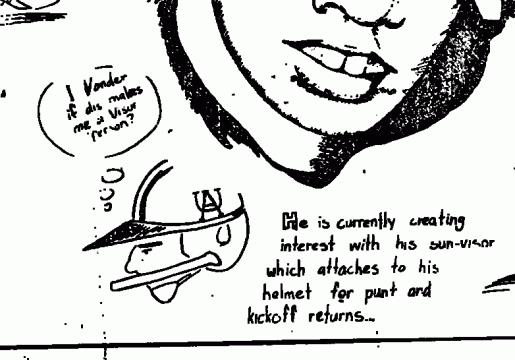 That’s what All-American safety Mike Fuller, who still holds the Auburn record for best punt return average, used it for. Here’s his visor (getting ripped off) in action (can’t see it? Try here):

You can see in the video that Rick Neel, No. 40, also at least once wore a visor to receive a kick, though in a photo from the book “Tiger Walk To Victory” eagle-eyed by TWER reader Brian Powers (who was also the first to bring the black Auburn helmet stripes to our attention), Fuller appears to be wearing a visor while actually playing defense, too!

All three were ecstatic about the Malzahn hire, obviously.