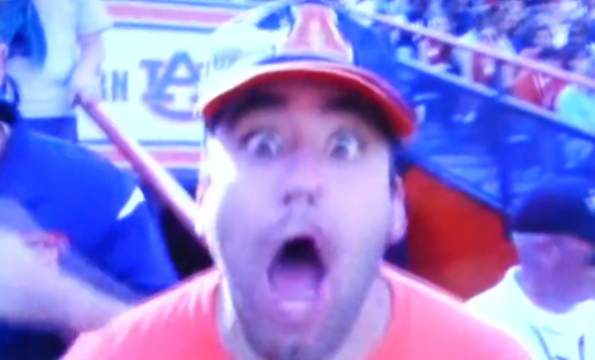 Saturday afternoon at Jordan-Hare was the kind of day that everyone involved needed and deserved: A win that wasn’t a nail biter to the end and where the players made big plays and got to savor a win in front of the home fans and their families.

There were so many fun things to watch on Saturday but the clear winner was the Daren Bates fumble return stiff-arm. Bates is a senior who led Auburn in tackles last year and will again this year.  After the struggles the defense has had this year to create turnovers and make a big play, it was great to see him enjoy his moment in the spotlight.  And anything that evokes memories of Cam Newton’s exploits—including both an epic stiff-arm and a Superman-like dive into the end zone—was pretty much welcome at this point in the season.  (All that was left was for Bates to do the “shirt rip open” move—or maybe the Heisman pose!)

Here’s a startling little bit of Tiger Trivia for you to ponder:  When was the last time that Auburn won at home when the game was not in doubt in the fourth quarter? Ready for this? You have to go all the way back to the UT-Chattanooga game at the end of the 2010 season – almost two full years ago.  In football time, that’s eons ago.  So the players deserved a game where they could see all their hard work rewarded with success, and the younger players and backups could get into the game and play.  For that matter, the fans deserved a game where they weren’t leaving disappointed and could sit back and enjoy the fun of a football game (at least, after halftime).

There were a few other good storylines scattered out here and there, as well.  Jay Prosch scoring his first touchdown, only a few weeks after his mother passed away.  Trovon Reed scoring (!!) while wearing the Ladarious Phillips jersey.  (On our show this week, John mentioned being shocked that Reed had never scored before.  Van countered that he couldn’t remember Reed ever making a first down before.)  Eight different Auburn players had a tackle for a loss in the game.  Good times, good times.

Before we look at the Georgia football team, two related points need to be discussed quickly.

One: This schedule business makes no sense at all to us.  We have been told that Georgia will be visiting Auburn again next year, meaning that Auburn will play Georgia in Jordan-Hare twice in a row.  Okay.  Better “twice at home” than “twice on the road.”  (Sorry, Dawgs.)  We are also told that this will be a “one-off” situation; that it applies only to 2013, while the conference tries to adjust to the “new normal,” and after that things will return to “old normal,” or whatever normal can be, what with fourteen teams in the league now.  We are also told that Georgia is not permanently switching from an even-year home opponent to an odd-year home opponent.  (Such a move would mean we had both Georgia and Alabama at home in the odd years, and neither at home in the even years—a potentially devastating blow to even-year ticket sales.)

But this makes no sense.  If Auburn hosts Georgia in 2012 and 2013, and then things go back to “normal,” that would mean Auburn would host Georgia THREE years in a row—2012, 2013, and 2014.  OR that would mean Auburn would permanently visit Athens in even-numbered years (starting with 2014), thus permanently altering the schedule with them and putting the road bama and road UGA games in the same year.

Two:  The Auburn-Georgia series is in danger of sliding disastrously to the east.  It may already have.

Auburn and Georgia are traditionally on a par with one another.  For years and years the series was virtually tied in number of wins by each side and even in total points scored by each side.  The visiting team even had a better-than-even chance of winning on the road every single year.

Do you realize that in all the time since Brandon Cox connected with Devin Aromashodu on fourth and long to set up the winning score, Auburn has beaten the Bulldogs exactly once?  (You may recall who our quarterback was that time.  We hear he went on to big things.)

Auburn got stuck behind Alabama in series wins precisely this way: by losing nine in a row to the Bear in the 1970s.  If we allow this trend to continue with Georgia, it might be a very long time before we can win enough games in a row to make up the difference.  We do not want to see the Auburn-Georgia series slide permanently (or even semi-permanently) to the east.  If Auburn loses on Saturday, the series will stand at six wins for Georgia to one for Auburn in the last seven.  That is not acceptable.

When Georgia is regularly dominating Auburn, it means something is wrong on the Plains.  It’s as simple as that.  And it must be addressed.  It’s one of the canaries in the coal mine, warning us that we’re not quite what we used to be.

UGA:  Not as Good as You Think

So, the Dawgs are up to fifth in some polls.  Very impressive.   But let’s look a little closer, shall we?  Georgia has played four teams with winning records.   South Carolina crushed them in Columbia.   UGA beat Florida in the “World’s Ugliest Outdoor Football Game.”   The other two games were big home wins over Vanderbilt and Ole Miss.  Woo-hoo.    They have played the 13th most difficult schedule in the SEC according to Jeff Sagarin’s USA Today rankings  which rank UGA fifth in the SEC.

Georgia has played three road games this season.  In the first game UGA and Missouri were tied 17-17 midway through the third quarter before UGA pulled away.  We have since learned that Missouri’s transition to the SEC isn’t going well.  In their second road game South Carolina annihilated them.  In the third road game UGA trailed a terrible Kentucky team 17-16 in the third quarter before escaping with a win.  A Tennessee team with a defense that makes Auburn’s offensive unit look good by comparison went into Athens and gave UGA all they wanted.    So on closer examination this UGA team hasn’t done much and could actually be a little bit vulnerable.  (Dare we whisper, “Oh-ver raaay-ted?”)

In SEC road games UGA quarterback Aaron Murray has been mediocre (8 touchdowns, 5 interceptions and a lower quarterback rating than Auburn quarterbacks when Auburn plays at home.  Yes, we know that is hard to believe).   In the neutral site game against Florida Murray was horrific.   So Auburn will need to focus on shutting down the run and making Murray have to beat them.  The Tigers defense must prevent him getting into a rhythm.    And there is hope:  Unlike in the Texas A&M game where he faced a senior soon-to-be NFL draft pick, Auburn defensive end Corey Lemonier will face off against a freshman offensive tackle in this game.

The good news is that Auburn’s defense is better equipped to handle the UGA offense when they line up with the freshman back Gurley and try and run right at us. Georgia on the road is only averaging 107 yards rushing as a team.  That’s it: 107.

Additionally, the Dawgs are poor on special teams and Auburn has an actual advantage there. (An Auburn advantage!  Holy cow!)  Can Auburn leverage that into a big kickoff return at some point, or maybe better punting, leading to field position control for parts of the game?  Perhaps.  It would certainly help.

A History of Upsets

Are you familiar with the epic upsets in this series? Perhaps a quick refresher is in order:

Is this game a bridge too far for this Auburn team?  Probably.  But if Auburn has a chance to win here is how it will need to play out:

Don’t forget—in addition to our weekly column here at the War Eagle Reader, you can also enjoy our patented blend of world-class insights (cough cough) and abject silliness while driving your car—and without the danger of running off the road and crashing (unlike our offense this year)!  That’s right—the Wishbone Podcast has been up and running for nearly a month now, and you can listen to new episodes as well as everything we’ve done so far by visiting the War Eagle Reader early each week, or by searching “AU Wishbone” on iTunes, or you can visit http://auwishbone.podbean.com.  We welcome your comments and questions and will try to respond to them on the air.

The Elite:
Alabama.  (Yes, they won.  No, this is not the greatest college football team in the last 40 years. )

The Very Good:
LSU  (They had bama on the ropes and let them escape.  Sometimes Les really is less.  Now they get to welcome Dan Mullen and the not so tough MSU cowbells.)

Georgia (Ole Miss hung around for a half.)

The Good:
Texas A&M  (After emptying another SEC stadium by halftime, the air raid heads to Tuscaloosa.  We give them a sniper’s chance.  Should be interesting, at least.)

Miss State  (The downside of the easy early schedule is the big drop once real competition starts.)

Ole Miss  (From a Nutthouse to a Deep Freeze.  The blACKBeARs have improved under Hugh Freeze but not enough to waltz into Athens and win.  There are three games next weekend matching SEC teams with winning records, and Vandy at Ole Miss is one of them.  Think about that.)

The Not Good:
Vanderbilt (Boom)

Tennessee (About that defense…And Dooley continues to wonder why there’s a short blond guy parking in his spot now.)

Missouri  (Searches pockets for receipt for SEC entrance fee to see if is too late to get money back.)

The Wretched:
Arkansas  (They seem to have settled into the “utterly mediocre” category, which is sort of an improvement from the beginning of the year…)

The Mold-Encrusted Sub-Basement Half a Mile Below the Level Reserved for the Wretched:

Kentucky (And some people thought Auburn might be the worst SEC team….)