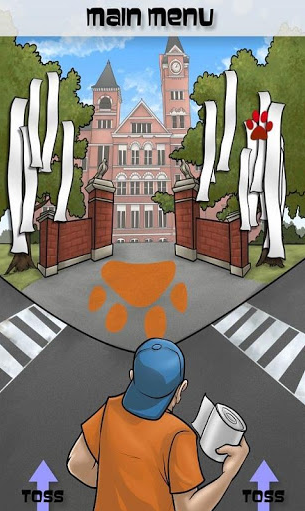 In July, TWER reported that Auburn’s Division of Student Affairs had commissioned the development of a video game app for iPad and iPhone called Roll Toomer’s Corner. Originally slated for September, the app’s release was pushed back due not to concerns over how it would be received in light of the oaks current condition but minor technical issues, according to the app’s developer.

In the meantime, another app called Roll Toomer’s Corner, developed “in partnership with Toomer’s Drugs,” and by another company, has been released for both Android and iPhone.

“It has a game mode where you try to hit tiger paws to score points, and a freestyle mode to roll as much TP as you want,” bstechnologiesllc.com’s Wes Sheldon told TWER in an email. According to the company’s website, portions of the proceeds from sales of the $1.99 app “will go to a scholarship fund and bring awareness to the declining health of the Toomer’s oaks.”

Look for the next Toomer’s-related app to feature fire hoses.