The current alter ego of a former friend of Aubie is making headlines for convincing an Indianapolis Colts cheerleader to go (temporarily) bald to fight cancer.

Trey Mock, known better to Indianapolis Colts fans as Blue the mascot, issued a challenge to the Colts’ cheerleaders via Twitter: “If I raise $10,000 4 leukemia research, will a cheerleader let me shave her head at our next game?” 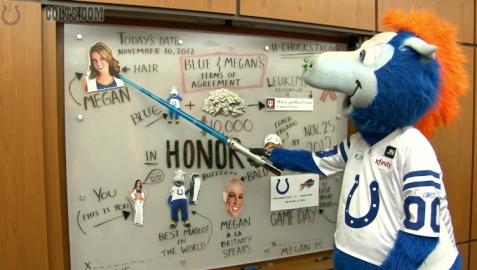 You can watch the video here.

The effort is part of the Colts’ CHUCKSTRONG cancer research campaign, named in honor of the team’s coach, Chuck Pagano, who has been diagnosed with leukemia. If Colts’ fans donate $10,000 by Nov. 25, Mock will shave Megan’s head duringIndianapolis’ home game vs. Buffalo.

Mock was on the team that helped Aubie win the 2003 mascot national championship.

“Between the Aubies and the Delaware mascots, those are two programs that their mascots go pro,” Mock, a Marietta, Ga. native, told the Atlanta Journal-Constitution before leading the Colts onto the field for Super Bowl XLIV.

Related: Former (Friend Of) Aubie competing on ‘America’s Got Talent.’