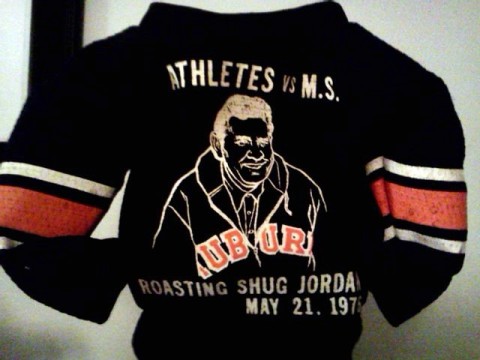 “So this year stinks…so be it. War Eagle Relics will help us make it through. Apparently there was a Roast of Coach Jordan on May 21st, 1976. I haven’t found any information about this event except for this mini-jersey. Looks like it was a fundraiser to fight M.S.”

I’m glad that frequent contributor @lulupuppydog feels like this humble post can help ease the pain of a rough season, but it is he and those like him who have provided me with a measure of comfort by continuing to send me treasures from the glorious history of our great school. This mini-jersey is up there with the best items he has provided in the past.  Love the picture of Shug in his Auburn jacket, but the sleeve stripes really make this thing work.

According to an article in The Tuscaloosa News (sorry, it was the only source I could find – but check out that Shasta ad), the roast of Coach Jordan was indeed a fundraiser for Multiple Sclerosis held at Koehler Plaza in Birmingham. Those giving Shug the business that night included such Auburn luminaries as former AD Jeff Beard and former players Tucker Frederickson, Pat Sullivan and Terry Henley. The best name on the program belonged to an Alabama assistant coach (who invited him?) with the handle Dude Hennessey and there was even a national champion water skier, an Auburn grad, delivering zingers. I’d love to hear the material the roasters used that evening. Shug’s keen fashion sense? His propensity for being photographed smoking? His grandfatherly charm? How do you skewer the seemingly un-skewerable? Whatever it was they hurled at him, there’s probably not much a man who stormed the beaches of Normandy and reached the highest levels of his profession upon his return couldn’t easily laugh off. 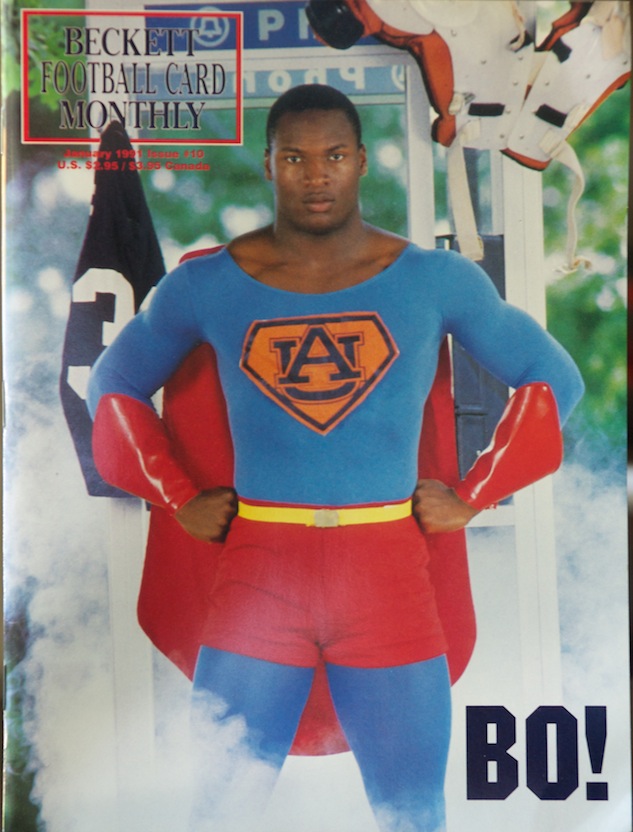 I was a card collecting fiend in the late ‘80s-early ‘90s and had this very issue at some point in time, but I had completely forgotten about it until Jimmy sent it along. Before Cam was SuperCamming, Bo was full-on Superman-ing. The picture is clearly older than the issue date of 1991, but how cool is it that in the midst of his ascent to superstardom in the NFL (and MLB) that he was on the cover of the publication for card collectors with a big AU on his chest? 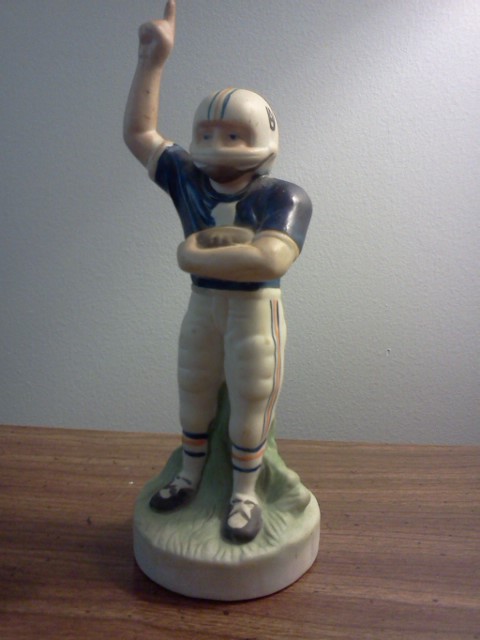 “This is a relic from the early 80’s. I didn’t show the back of the figure because the grass is creeping up the player’s backside, can’t figure it out to this day.”

We’ve had Auburn figurines in this space in the past, mostly of Aubie, but this one stuck out to me in particular this week following the passing of my wife’s grandmother last Wednesday. She was a sweet woman who loved to collect figurines and had shelves full of them in her home. She didn’t have any Auburn players (she was an adopted Razorback after spending much of her retirement in Arkansas), but this piece reminded me a lot of the things she did have in her collection. She will be missed. 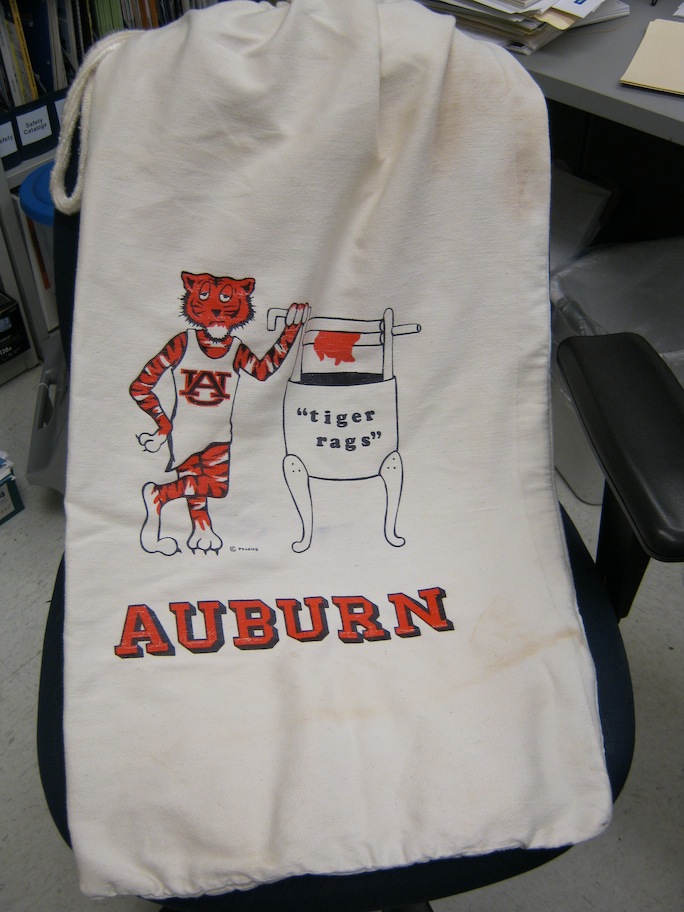 “Haven’t seen this one before.  Great little collectable that I found at my in-law’s house.  The old duffel bag used to carry clothes to the laundry. Looks like it’s the original ‘Tiger Rags.’”

What better way to transport your used Auburn jock straps (to Tiger Laundry, perhaps) than this classic bag? The tiger looks none too pleased to be stuck with the task of doing the wash and could easily pass for an illustrated precursor to the “not impressed” meme. 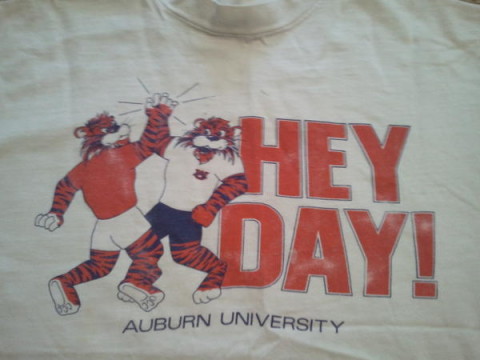 For those who don’t know or don’t remember, a recap from Wikipedia: “Hey Day is a tradition that takes place in both the fall and spring semesters. Started in the 1950s” –Wrongipedia, it was the 40s–“Hey Day is a day dedicated to promoting friendliness on Auburn’s campus. Students, faculty, and staff wear name tags and say “hey” to those they pass.” Some find this tradition to be corny, or worse, phony, but I always found it to be a harmless attempt at promoting some good old Southern charm and friendliness on campus. This shirt from the ‘80s makes it look like Hey Day was really High Five Day… maybe organizers tried to let down their hair a bit to compete with How’s It Goin’ Man Day. 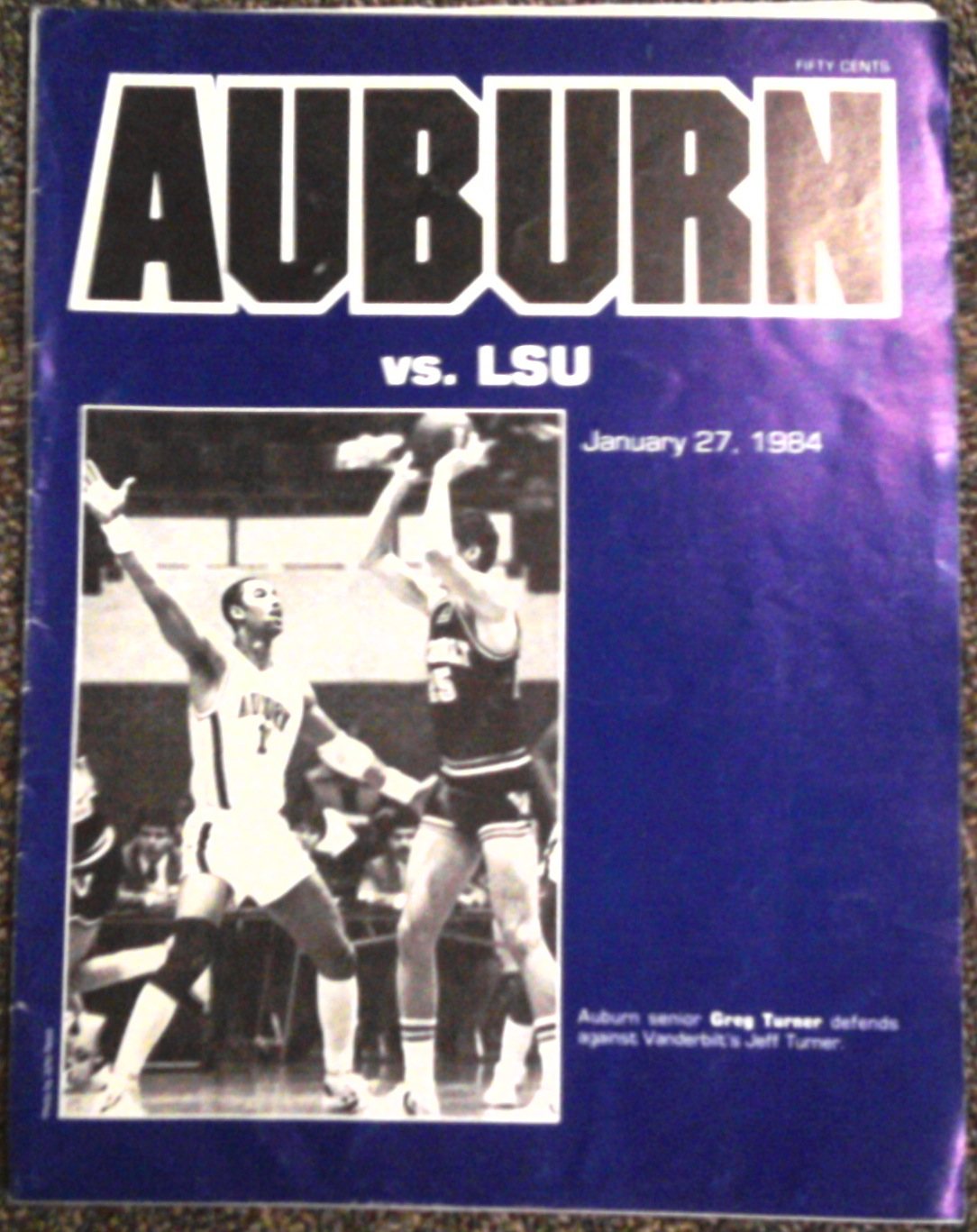 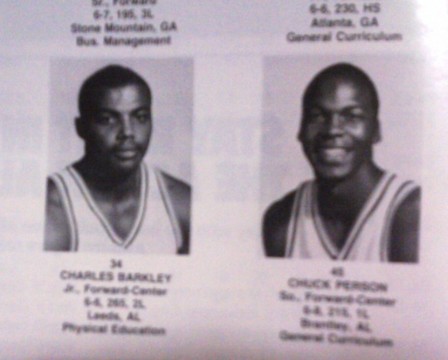 “Here is a January 1984 basketball game program vs. LSU.  Really only notable for the side by side of 34 and 45 on the inside.”

As Lonnie says, the cover of this program is not particularly noteworthy for its design and only slightly for the picture of Greg Turner defending a Vandy player named Jeff Turner (Turner on Turner). I was not familiar with the Tiger’s Turner until now, but he was apparently good enough to be a 9th round draft pick of the NBA’s Kansas City Kings in 1984. The gentlemen on the inside of the program are a bit easier to identify and remember, even if the picture is a touch out of focus. Two of Auburn’s greatest

That will do it for this edition. For past posts, click here. Thanks as always to our truly valued contributors. I hope to keep this up when time permits, but I need your help to do so.  Snap a pic of your best Auburn collectables and send it to me at [email protected] so I can share them with the Auburn world.