I never would have thought I would see the day that Vanderbilt is a touchdown favorite over Auburn, but that day has come. Although Auburn is 13-1 against the Commodores since 1978, the series is knotted up at 20-20-1, with most of the Vandy wins coming between 1893-1950. While things aren’t looking so lovely on The Plains recently, this week we’ll take a look back at some of the lovelier times in the series against our friends from the Music City.

In a season that started out with Auburn ranked preseason No. 1 by ESPN Magazine, the Tigers fell flat in the first two games, losing at home to USC, 23-0, and then on the road in Atlanta to Georgia Tech, 17-3. The Tigers hit the road to Nashville in the third week, and finally got back on track. A loss would have completely derailed the season, but the Tigers found their groove as quarterback Jason Campbell completed 12-of-19 passes for 220 yards and two touchdowns, including four passes to Jeris McIntyre for 117 yards and the two touchdowns. Running backs Carnell “Cadillac” Williams and Brandon Jacobs also rushed 33 times for a combined 137 yards and a touchdown. The game was also known for a crushing blow delivered by Jacobs on unsuspecting Vandy tight end Dan Murphy on a kickoff.

Sandwiched in between two 20-10 road victories over North Carolina and Georgia Tech respectively, the Tigers returned home to host the Commodores. The fifth-ranked Tigers improved to 4-0-1 on the season with the dominating home victory en route to the first of three SEC Championships in a row.

An early 51-yard touchdown run by freshman Carnell “Cadillac” Williams proved to be the difference in the game as the Tigers held off a furious comeback by the Commodores. Leading 7-0 at the half, the Commodores answered in the second half with a 4-yard touchdown run by Lew Thomas. The Tigers answered 1:09 later on a 35-yard touchdown strike from freshman quarterback Jason Campbell to tight end Robert Johnson. Thomas added his second touchdown of the game on a 2-yard run, but Cadillac was tit-for-tat with Thomas, adding a 1-yard dive for the score near the end of the third quarter. Leading 21-14 entering the fourth quarter, Vandy quickly drove 83-yards and capped the drive with a 4-yard touchdown pass from quarterback Dan Stricker to Greg Zolman to take the lead. But sure-footed Damon Duval saved the day for the first time in the 2001 season (he later beat No. 1 Florida on a last-second kick) when he nailed a 49-yarder with 2:58 left in the game to put the nail in the Commodore coffin.

In the next to last game of the season, Auburn held off the Commodores in the waning minutes in what would be the closest game of the Tigers first national championship season (*the Tigers finished the 1913 season 8-0 and were awarded the national title by Billingsley, a component still used in the BCS rankings). 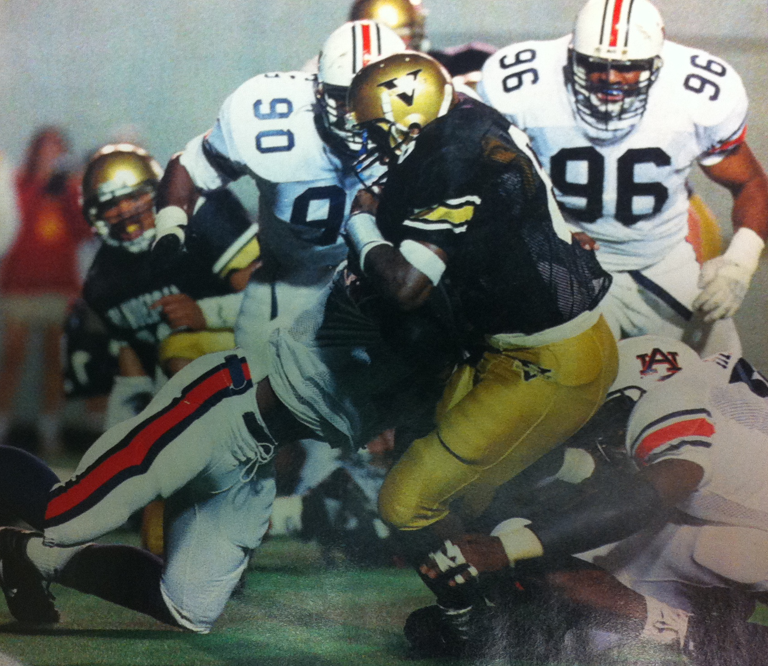 In what was surprisingly one of the closest games of the 1993 championship season (*Auburn was awarded the title by the National Championship Foundation, although they were ineligible to play in the SEC or National Title game due to probation sanctions), the Tigers held strong on a goal-line stand with just less than five minutes to play to secure the win and improve to 5-0. The Commodores drove 68 yards in 10 in the waning minutes of the game to earn a 1st-and-goal from the Auburn 3, but the Tigers’ defense stood up when it counted the most. On first down, Vandy quarterback Kenny Simon rushed for 2 yards to get the Commodores within 3 feet of paydirt. On second down, Vandy running back Jermaine Johnson attempted to “Jo Over the Top” on the Tigers, but Auburn linebackers Anthony Harris and Terry Solomon would have nothing of it and stifled Johnson in midair. On third down, Vandy fullback Royce Love once again tried to bully his way across the line, but the Tigers showed him no love and stopped him in his tracks. Vandy head coach Gerry DiNardo chose to go for the touchdown on fourth down instead of the field goal, but the plan backfired as Auburn defensive tackle Randy Hart showed some heart by plowing through the Vandy line to square Johnson, thus ending Vandy’s hopes of dashing Auburn’s dreams.

The Tigers improved to 5-0 by dismantling the Commodores, 33-0. The win gave Auburn fans hope of a championship run, but those hopes were deferred the following two weeks as the Tigers dropped consecutive games in Starkville, Miss., to Mississippi State and then in Gainesville, Fla., to the Gators.

The No. 24-ranked Tigers were reeling from consecutive losses at Tennessee and then to the Southern Miss Eagles, and they needed a win badly. The win wouldn’t come easy as the Commodores threw everything but the kitchen sink at the Tigers. The narrow victory would be the next to the last victory of the season for the Tigers, as Auburn closed out the season 1-4 following the win over the Commodores.

In the first match-up in the series, and just the sixth game in Auburn football history, the Plainsmen put up the second-highest scoring total in school history with 30 points (*The highest total was reached in the first game of the season in February against Alabama. The Tigers won that first showdown in what would become the fiercest rivalry in all of sports, 32-22).